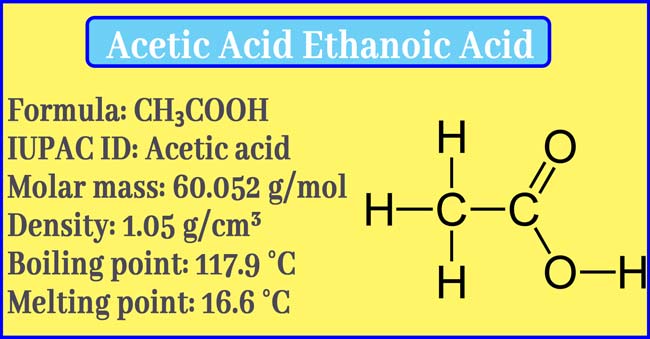 Acetic Acid has been known since ancient times as vinegar. About 10% of vinegar is acetic acid. It was first built in 1720 by Stahl in an impure form. It was first obtained in pure form by Lavosier in 1786 by oxidation of ethyl alcohol.

In 1845, Kolbe synthesized it from its elements. Its molecule formula C2H4O2 and structure formula are as below. 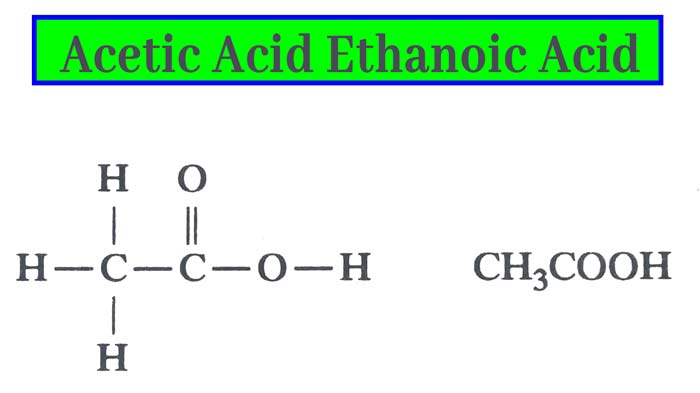 The following are the major methods of industrial manufacture of acetic acid.

In this method, firstly acetylene gas are obtained by the action of water with calcium carbide.

After this, acetaldehyde is obtained by flowing acetylene gas in a mixture of 42% sulfuric acid and 1% mercuric sulfate at 60°C heat. Thus obtained acetaldehyde is mixed with air vapours and flowing at high pressure and 70°C temperature with catalyst (vanadium pent oxide or manganese acetate) and the result we get oxidation of acetaldehyde. It gives Acetic Acid.

The Determination of Acetic Acid in Pyroligneous Acid

Pyroligneous acid obtained from distillation of wood contains about 10% acetic acid in addition to water, 2-4% methyl alcohol and about 0.5% acetone.

To obtain acetic acid from pyroligneous acid, it is heated in a copper vessel. The vapours obtained from it flow into the milk of lime.

The impurities of methyl alcohol, acetone etc. are dissociated as vapors. Calcium acetate is filtered and separated. After drying it is distilled with concentrated sulphuric acid to obtain acetic acid of about 75% concentration.

A small amount of water is also present in it. To remove small amounts of water, cool it to 16. On doing this, acetic acid is converted into a solid state.

Water remains in a fluid state. Small amounts of water are filtered or separated by any other suitable method. In this way pure and anhydrous acetic acid is obtained.

Pure and anhydrous acetic acid is obtained in the solid state similar to ice. Hence, it is called glacial acetic acid.

Hence, the efficient distillation method can also be used to obtain glacial acetic acid from aqueous solutions of acetic acid.

Nowadays due to the advancement of efficient distillation methods, glacial acetic acid is mainly made from this method by the aqueous solution of acetic acid.

Nowadays acetic acid is made in commercial quantities mainly from vinegar. In addition to water, vinegar contains about 6% Acetic acid, some other organic acids, some ester and some other substances.

Pure and anhydrous acetic acid can be made from the effective distillation of vinegar. 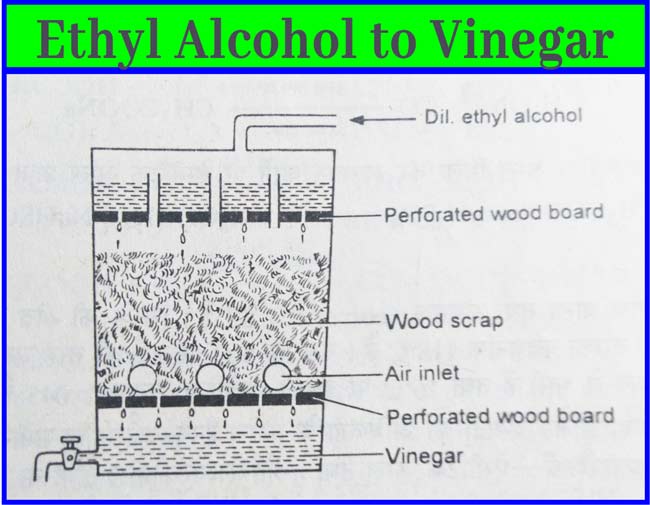 The method of making vinegar from ethyl alcohol is called quick vinegar method. In this method, a large keg of wood is used. This casks have wooden planks at the top and bottom. In between these two planks fill the clipping of vinegar-soaked beach wood. Some holes remain in the casks walls so that the fluid present in the casks remains in contact with air.

Approximately 10% aqueous solution of ethyl alcohol is slowly added upward in the casks. The temperature of the casks is kept at about 30-35°C. The fluid obtained from the bottom of the keg is slowly poured over it from time to time. After about 1 week vinegar is obtained from the lower part of the keg(casks).

Preparation of Acetic Acid by other method

Acetic acid is obtained by oxidation of the acidic potassium dichromate solution of ethyl alcohol.

Acetic acid is obtained from water decomposition by dilute acid of methyl cyanide.

Acetic acid is obtained from water decomposition by dilute acid of ethyl acetate.

Acetic acid is obtained by the action of nitrous acid on Acetamide.

Acetic acid is also obtained from the water decomposition of acetamide.

Acetic acid is obtained after distillation by adding sulfuric acid to sodium acetate.

It is a colorless, strong-smelling and corrosive liquid. The intense smell of vinegar is due to the presence of acetic acid in it. Its boiling point is 118°C. It freezes like snow at 16.5°C. It is soluble in water, alcohol and ether. It is heavier than water and its relative density is 1.045 at 16°C.

Following are its major chemical reactions.

Reaction with Bases: acetic acid is a weak monobasic acid. And ionizes in aqueous solutions, forming cations of acetic ion (CH3COO–) and hydrogen. Due to its acidic properties it reacts with bases to form salts.

Esterification: Just as the acid and base reacts to form salts and water, similarly the reaction of acid and alcohol makes ester and water. This reaction is called esterification. The esterification action of carboxylic acid is often carried out in the presence of concentrated sulfuric acid. It works as both anhydrous and catalyst.

Halogenation: The hydrogen atoms of the methyl radical are displaced one by one from the chlorine or bromine atoms when chlorin or bromin is flowed in acetic acid in the presence of red phosphorus.

Reaction with PCl5: It reacts with PCl5 to form acetyl chloride (CH3COCl). In this reaction, the -OH group of the -COOH group is displaced from the chlorine atom.

Same reaction is also occur with PCl3 and SOCl2.

Dehydration: When heated acetic acid alone or in the presence of anhydrous agents such as phosphorus pentoxide, one of its two molecules dissociates and produces acetic anhydrid.

Reduction: Lithium is reduced by aluminum hydride to form ethanol.

Reactions to salts: Methane is obtained by heating sodium acetate with soda lime.

Ethane is obtained after the legal decomposition of sodium or potassium acetate.

Acetaldihyde is obtained by mixing calcium phormate with calcium acetate.

Methyl bromide is obtained by reacting with bromine in a dry CCl4 solution of silver salts of acetic acid. This reaction is called Hunsdiecker Reaction.

Schmidt Reaction: It reacts with hydrejoic acid in the presence of concentrated sulfuric acid to form methyl amin. This reaction is called Schmidt Reaction.

As reagent in the laboratory

In the manufacture of artificial fibers called cellulose acetate and polyvinyl acetate.

which is an oxidizing agent in making tetra acetate.

Acetic acid and acetate ion are tested by the following methods –

On heating with a few drops of ethyl alcohol and concentrated sulfuric acid, ethyl acetate is formed which has a sweet smell like fruit.

The solutions of acetic acid and its salts do not show the reducing properties. Hence, acetic acid does not reduce ammonia silver nitrate solution or Fehling solution.

Cacodyl Test: Upon mixing and evaporating arsenious acid in an acetic acid solution neutralized by potassium dioxide, a substance called Cacodyl oxide [(CH3)4As]O2 is formed which has a strong odor.

In addition to the above tests, acetic acid also gives a general test of carboxylic acid (NaHCO3). Effervescences are obtained due to the formation of CO2 gas upon the addition of NaHCO3 solution to acetic acid.

Ionisation Potential : What are the factors that decide the ionisation potential?