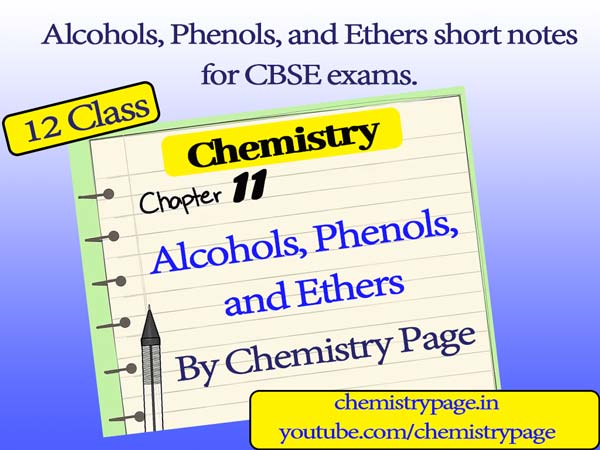 We are going to series call “परीक्षा की तैयारी” this is a special practice for class 12th students going to appear in upcoming board exam 2020. In this series, we are going to solve CHEMISTRY (Theory) chapter wise CBSE Previous Year Question Paper Solution. It will very helpful for gaining good marks in the board exams. In this Lesson, we provide an important topic list in the chapter so that students can focus on these on priority. We discussed chapter Alcohols, Phenols, and Ethers short notes for CBSE exams.

Nomenclature: In a common system, alcohol is named as alkyl alcohol. According to the IUPAC system, alcohols are called ‘alkanols’, by replacing ‘-e’ of alkane by ‘-ol’.

Classification: Alcohols are classified as monohydric, dihydric, trihydric and polyhydric alcohols depending upon the number of Hydroxyl (—OH) groups present in the molecule.

— By reduction of aldehydes and ketones:

— By reduction of carboxylic acids and esters:

— The acidity of alcohols (reaction with metals):

— The acid strength of alcohols decreases in the following order:

— Lucas test: Lucas reagent is a solution of conc. HCl with anhyd. ZnCl2.

Thus, the relative ease of dehydration of alcohols follows the following order:

Methanol (wood spirit): It is produced by catalytic hydrogenation of CO in the presence of ZnO – Cr2O3 as the catalyst at high temperature and pressure.

— Methanol is a colorless liquid and is highly poisonous in nature.

— It is used as a solvent in paints, varnishes and for making formaldehyde.

Ethanol: It is commercially manufactured by using fermentation of sugar present in molasses, sugarcane or fruits such as grapes.

— Ethanol is a colourless liquid and is used as a solvent in the paint industry and in preparation for a number of carbon compounds.

— Commercial alcohol made unfit for drinking by mixing it with copper sulfate and pyridine is called denatured alcohol.

General formula: Phenols are the compounds in which the hydroxy ( OH) group is directly linked to the aromatic ring having formula C6H5OH.

Nomenclature: The simplest hydroxy derivative of benzene is phenol also called carbolic acid. It is its common name and also an accepted IUPAC name.

Structure: In phenols, the —OH group is attached to sp2 hybridised C-atom of an aromatic ring.

Classification: Like alcohols, phenols are also classified as mono and polyhydric phenols.

Odour: They have characteristic phenolic odours.

Solubility: Like alcohol, phenols are soluble in water due to the formation of hydrogen bonding with water.

— Phenols are less soluble than alcohol due to large hydrocarbon (benzene ring) part.

— Phenols are soluble in alcohols, ethers and also in NaOH.

Boiling points: Much higher than the corresponding aromatic hydrocarbons and haloarenes due to intermolecular hydrogen bonding.

The acidity of phenols: Phenols are weakly acidic in nature due to polar O H bond directly attached to sp2-hybridized C-atom.

— They turn blue litmus red and react with alkali metals and alkalies to form their salts.

— Phenol is a weaker acid than a carboxylic acid. It does not react with Sodium Carbonate (Na2CO3) and sodium bicarbonate (NaHCO3).

— Phenols are more acidic than alcohol which can be explained on the basis of resonance.

In addition to this, phenols react with aqueous sodium hydroxide to form sodium phenoxides.

The reaction of phenol with zinc dust:

— Bromine water test: Phenol gives white ppt. with Br2-water due to the formation of 2, 4, 6-tribromophenol.

Nomenclature: Common names of Ether are derived from the names of alkyl/aryl groups written as separate words in alphabetical order and adding the word ‘ether’ at the end. If both the alkyl groups are the same, the prefix ‘di’ is added before the alkyl group.

According to the IUPAC system of nomenclature, Ethers are regarded as hydrocarbon derivatives in which a hydrogen atom is replaced by an OR or OAr group, where R and Ar represent alkyl and aryl groups, respectively. The larger R group is chosen as the parent hydrocarbon.

Structure: In ethers, the four-electron pairs, i.e., the two bond pairs and two lone pairs of electrons on O atom are arranged approximately in a tetrahedral arrangement.

From alcohols by dehydration:

Physical state and odour: Dimethyl ether and ethyl methyl ether are exceptionally gases at room temperature while all other ethers are colorless liquids with the characteristic ethereal smell.

Solubility: Ethers are soluble in water to a certain extent due to hydrogen bonding.

— Ethers are fairly soluble in all organic solvents such as alcohol, chloroform, benzene, etc.

Boiling points: Ethers have lower boiling points than isomeric alcohols due to their inability to form hydrogen bonds and get associated.

— But lower ethers have slightly higher boiling points than n-alkanes of comparable molecular masses due to dipole-dipole interactions.

— Polarity: Ethers are polar in nature.

— Density: Ethers have low density. All Ethers are lighter than water.

Cleavage of C—O bond in ethers:

The order of reactivity of hydrogen halides is as follows: HI > HBr > HCl.

Why are Gas Laws Important in Chemistry? Gas Laws Chemistry

IUPAC Name : How to find the IUPAC name of compounds.

Magnesium Benefits || Why Magnesium is so Good for You and Properties