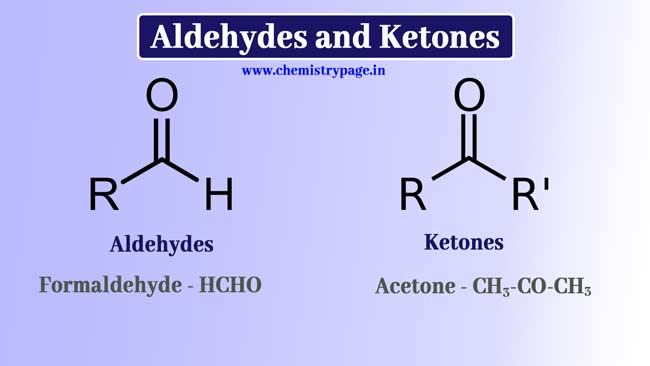 When the -CHO group is attached to a hydrogen or carbon atom, it is called an aldehyde group. And the related compound is called Aldehyde.

Compounds in which the -CHO group is attached to a hydrogen atom or an alkyl group are also called alkanal. The common formula of these compounds is CnH2nO.

The common formula of these compounds is RCHO where R is a hydrogen atom or an alkyl group. There is a difference of CH2 between the two consecutive alkanal.

Hence all alkanal are members of the same homogeneous category. The first member of these categories is formaldehyde (HCHO) and the second member is acetaldehyde (CH3CHO).

When the -CO-group is connected to carbon atoms on both sides, it is called keto group or Ketone group and the related compound is called Ketone.

discussed the chapter Aldehydes and Ketones

The following points are discussed here

The compounds in which the -CO- group is attached to the alkyl group on both sides are also called Alkenones. The common molecule of these compounds is the formula CnH2nO, where n has a value greater than 2 or 2.

The general structure of these compounds is the formula R1-CO-R2, where R1 and R2 are the alkyl group. R1 and R2 may be the same or different. The two consecutive alkenones have a difference of CH2. Hence all alkenone are members of the same homogeneous category. The first member of this category is acetone (CH3-CO-CH3) and the second member is methyl ethyl ketone(CH3-CO-C2H5).

The carbonyl group is present in both aldehydes and ketones compounds, hence both these types of compounds are also called carbonyl compounds.

In the simple method, they are named by removing ek from the end of the common name of the corresponding acid and adding aldehyde.

Therefore, it is often not necessary to display the number of carbon atoms belonging to the anhydride group in the IUPAC names of anhydrides.

Following are the common and IUPAC names of some anhydrides.

In the normal method, ketones are named based on the names of the groups associated with the ketone group.

In the IUPAC method, ketones are named by adding ‘one’ to the end of the corresponding alkane name. Removes ‘e’ from the end of the English name and adds ‘one’.

After this, the IUPAC name of that ketone is obtained after writing the appropriate and lowest number of carbon atoms related to ketone group in series of carbon atoms with the help of IUPAC rules.

Following are the common and IUPAC names of some ketones.

Isomerism in Aldehydes and Ketones

The aldehyde and ketone having the same molecule formula exhibit Functional Isomers.

Example: 2-pentanone and 3-pentanone are isomerism instead of each other.

Example: 2-pentanone and 3-pentanone are isomerism instead of each other.

Preparation of Aldehydes and Ketones

Oxidation of Alcohol: In the first step of oxidation of primary alcohols, aldehyde is obtained.

In the first term of oxidation of secondary alcohol, ketone is obtained.

The above reactions can be carried out easily by acidic solution of Potassium Dichromate (K2Cr2O7). Products obtained from these reactions can be reacted with the oxidizer to form other products (Carboxylic Acid).

Hence, the amount of oxidizer, temperature and other conditions of reaction are arranged such that the main products are aldehydes or ketones, and other products are not obtained.

Dehydrogenation of Alcohol: The flow of primary alcohol vapors at 300°C on heated copper gives aldehyde. Under these conditions secondary alcohols is made ketones. 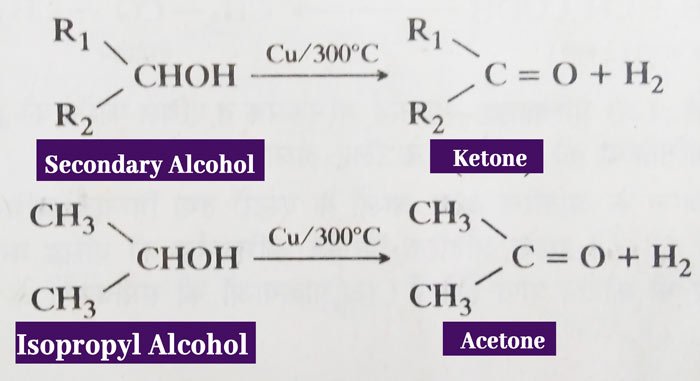 Aldehydes or ketones can be made by dry distillation of calcium salt of fatty acids.

Aldehydes: formaldehyde is obtained from the dry distillation of calcium formate ((HCOO)2Ca).

Other aldehyde is obtained by distilling calcium salt of another fatty acid with calcium formate((HCOO)2Ca).

Ketones: Ketone is obtained by heating calcium salt of any other fatty acid other than formic acid.

Aldehyde: aldehyde is obtained from a mixture of formic acid and its homogeneous acids.

Ketone: Other than formic acid, ketone is obtained from a mixture of other fatty acids.

Aldehydes – aldehyde is obtained by reaction of Grignard reagent and ethyl formate in 1: 1 molecular ratio.

The alkyl (-R) group used in the above reaction is methyl (-CH3) group. That is, methyl magnesium halide (CH3MgCl) is reacted with methyl formate, then acetaldehyde (CH3CHO) is obtained as a product.

Ketone: In addition to formic acid, ketone is obtained by the reaction of esters of other acids and Grignard Reagent in a 1: 1 molecular ratio. In addition, ketone is also obtained from reactions with acid chlorides, acid amides and alkyl cyanides of the Grignard reagent.

Aldehyde: When both halogen atoms of gem dihalide are located on the carbon atom of the end, alhydride is obtained from their water decomposition.

Ketone: When both halogen atoms of gem dihalides are located on any other carbon atom other than the carbon atom at the end, ketone is obtained from their water decomposition. 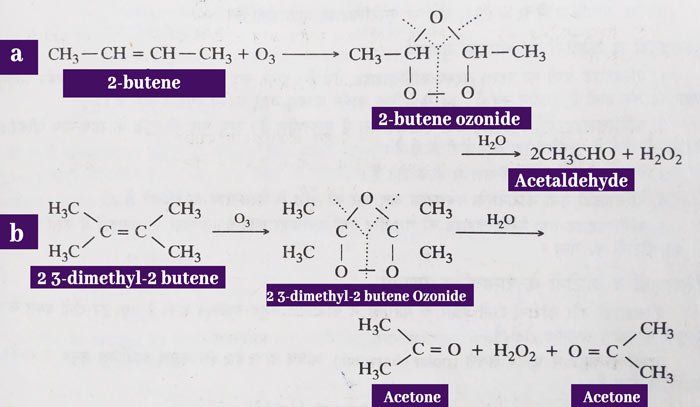 Acetylene: Acetylene gas is formed when it is flushed into hot and dilute sulfuric acid in the presence of catalytic mercuric sulfate(HgSO4). The homogeneous form of acetylene forms ketone.

By Rosenmund reaction: In the presence of Palladium-containing barium sulphate(BaSO4), acid chloride is reduced by hydrogen to form aldehyde. Ketone cannot be obtained by this method.

Methods of Preparation of Aldehyde, Ketones

Stephan’s method: On decomposition of ether dissolved alkyl cyanide with stannous chloride (SnCl₂) and hydrochloric acid, Imino chloride is obtained which decomposes water to form aldehyde. Ketone is not obtained by this method.

In the above reaction, Acetaldehyde is obtained when R = CH3.

Formaldehyde, acetaldehyde and acetone are soluble in water. Water solubility of aldehydes and ketones decreases with increase in molecular weight

Aldehydes and ketones are lighter than water.

The boiling points of aldehydes and ketones increase with the increase of the molecular weight.

The smell of formaldehyde and acetaldehydes is strong and unpleasant. Higher aldehydes have a fruit-like odor. Fluid ketones have a sweet smell.

A carbonyl group of both aldehydes and ketones compounds is present and there is substantial similarity in the properties of both these compounds.

Addition of hydrogen: Aldehydes and ketones are reduced by reacting with hydrogen and primary and secondary alcohols are obtained respectively. This reaction can be performed by hydrogen and Ni, Na – Hg and water, Na – Hg and ethyl alcohol, LIAlH4 or NaBH4.

When an aldehyde or ketone is reduced with zinc mercury amalgam and concentrated HCl, the carbonyl group (-CO-) is converted into methyline (-CH2-) group. This reaction is called clemmensen’s reduction. 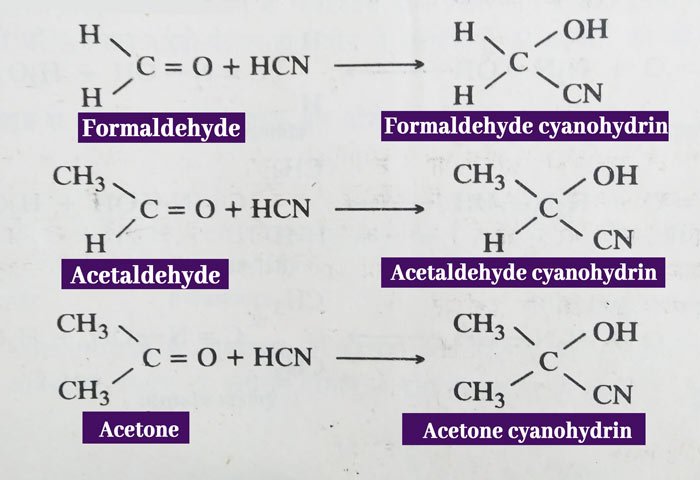 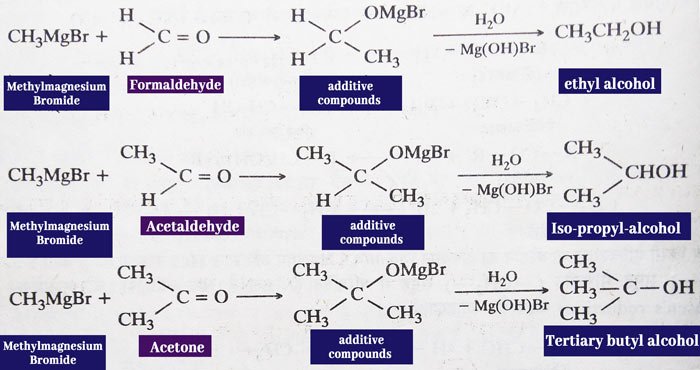 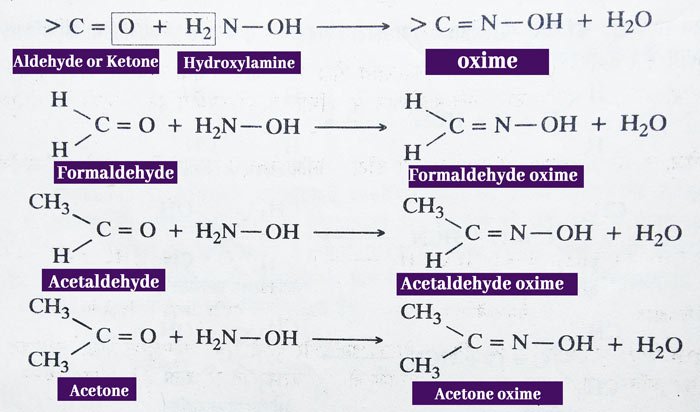 Reaction with Hydrazine: aldehydes and ketones react with hydrazine (NH2NH2) to form hydrazones. 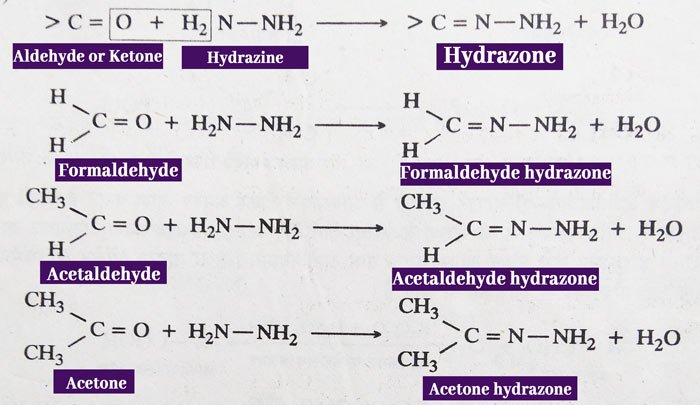 The reactions of aldehydes and ketones to phenyl hydrazine and 2,4-dinitrophenylhydrazine are similar.

Reaction with Semicarbazide: Aldehydes and ketones react with semicarbazide to form semicarbanzone.

Phosphorus Pentachloride: In reaction with phosphorus pentachloride of aldehydes and ketones, the oxygen atom of the carbonyl group is displaced by two chlorine atoms.

Ketone is not easily oxidized. These are oxidized to strong oxidizing agents such as acidic potassium dichromate to form acids in which the number of carbon atoms is less than the original additive. Ketone does not react with weak oxidants such as tollens reagent and fehling solutions.

The product obtained from condensation is called an aldol. It has properties of both aldehyde and alcohol. An unsaturated aldehyde or ketone is obtained by heating it.

In the presence of dilute NaOH, two molecules of acetaldehyde are combined to form an aldol, which upon heating gives crotonaldehyde.

In the presence of barium hydroxide, condensation of two molecules produces di-acetone alcohol, which, on heating, gives mesityl oxide.

Mecetylene is formed when acetone is heated with concentrated H2SO4.

Reaction of aldehydes and ketones with halogens displaces hydrogen atoms of the alkyl group from halogen atoms.

What are Catalysis and its types? Catalyst