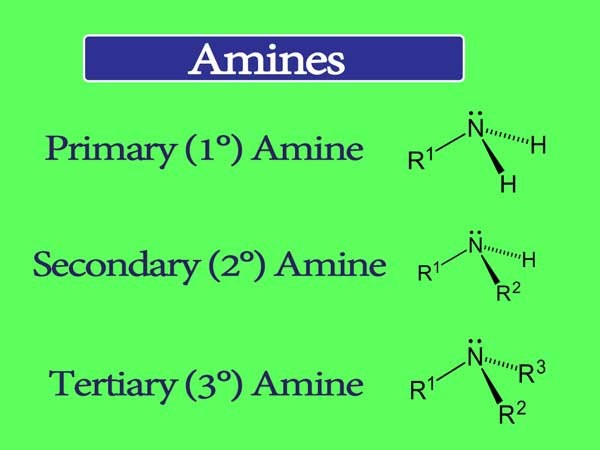 Interpretation of amine: The product after the substitution of one or more hydrogen atoms in the ammonia molecule with a hydrocarbon group is called an amine. In this lesson, we will discuss Amine Properties and Uses.

According to the number of hydrogen atoms substituted in the amine molecule, the amine can be divided into primary, secondary, and tertiary amines, ammonia Hydrogen in the molecule is replaced by a hydrocarbon group.

At the same time, the amine can be regarded as a derivative of H in the ammonia molecule replaced by a hydrocarbon group. Amines are widely present in the biological world and have extremely important physiological and biological activities, such as Protein, nucleic acids, many hormones, antibiotics, and alkaloids. They are all complex derivatives of amines. Most drugs used in clinical practice are also amines or amine derivatives.

Therefore, mastering the properties and synthetic methods of amines is to study these complex natural products and Basis for better maintenance of human health.

According to the number of hydrogen substituted, it is divided into:

Quaternary ammonium salt R4N+X – such as

For example, trimethylamine has a fishy smell, but succinyl amine (putrescine) and glutamine (cadaverine) have a bad smell after the animal carcass rots.

Higher amines are less volatile and have a lower odor. Aromatic amines are high-boiling liquids or low-melting solids. Although they are less odorous than fatty amines, they are more toxic. They can cause poisoning whether they inhale their vapor or contact the skin. Some aromatic amines, such as β-naphthylamine, and benzidine also have carcinogenic effects.

Because the nitrogen atom in the amine molecule can form a hydrogen bond with water, the solubility of lower fatty amines in water is relatively large.

Primary and secondary amines can form intermolecular hydrogen bonds, but because the electronegativity of the nitrogen atom is less than that of the oxygen atom, the hydrogen bonding ability of the amine is relatively weak, and its boiling point is lower than that of alcohols with similar molecular weight.

Amine is similar to ammonia in that the nitrogen atom in the molecule contains an unshared electron pair, which can be combined with H + to be alkaline.

There is a lone pair of electrons on the ammonia or amine nitrogen, which acts as a nucleophile and undergoes a nucleophilic reaction with a haloalkane. Many organic halides are treated with ammonia or ammonia solution to turn into amines:

The main synthetic method of amines is the alkylation of ammonia. Industrial use of alcohols and ammonia to synthesize organic amines:

These reactions require the use of catalysts, special equipment, and additional purification, because the mixture of primary, secondary, and tertiary amines is obtained, and the selectivity of the reaction needs to be improved.

Amines are widely distributed in nature, most of which is produced by decarboxylation of amino acids.

Most of the industrial methods for preparing amines are obtained by the reaction of ammonia with alcohol or haloalkanes. The product is a mixture of amines at various levels, and the pure product is obtained after fractional distillation.

Amine has a wide range of uses. The earliest development of the dye industry was based on aniline. Some amines are necessary for life support

Yes, but some are very harmful to life. Many amine compounds have carcinogenic effects, especially aromatic amines, such as naphthylamine and benzidine.

The structure of the nitrogen atom in the amine, much like the nitrogen atom in the ammonia molecule, is connected to hydrogen or a hydrocarbon group by three sp hybrid orbitals, forming a pyramid, leaving an sp3 hybrid orbital occupied by a lone electron pair. If an amine has three different groups, there should be a pair of enantiomers (see Enantiomers):

However, due to the low activation energy required for the lone electron pair in the inverted amine molecule, its enantiomers could not be separated.

The experiment proves that the amine and ammonia molecules have a pyramidal structure, the nitrogen atom is sp3 hybrid, and the bond angle is about 109 degrees.

In the amine molecule, the three sp3 hybrid orbitals overlap with the hydrogen atom’s s orbital or the carbon atom’s hybrid orbit to form three 6 bonds, and the remaining pair of lone pairs of electrons occupy the fourth sp3 orbit and are located in the prism. The top.

Aniline is also a pyramidal structure, but the HNH bond angle is large, 113.9 degrees, and the angle at which the NNH plane intersects the benzene ring plane is 38 degrees.

If three different groups are attached to the nitrogen atom in the amine molecule, it has chirality and theoretically, there should be a pair of enantiomers.

Because the energy barrier between the two enantiomers is quite low, about 21KJ / mol, they can be quickly converted to each other at room temperature. In fact, such enantiomers have not yet been separated.

In the quaternary ammonium salt, all four sp3 orbitals of nitrogen are used to form bonds. If four different groups are connected to the nitrogen atom, enantiomers exist.

Properties: Also known as monomethyl amine. It is a colorless ammonia odor gas or liquid at room temperature. It is easy to burn, and its vapor can form an explosive mixture with air, and the explosion limit is 5% -21% (4.95% -20.75%).

After liquefaction, the smoke body is more alkaline than ammonia. Soluble in water, ethanol, and ether.

What are the uses of amine?

Health hazards: Exposure to ethylamine vapors can cause eye irritation, corneal damage, and upper respiratory tract irritation. Liquid splashing into the eyes can cause severe low-level injuries; contaminated skin can cause burns.

Quickly evacuate personnel from the leaked contaminated area to the upper reaches and isolate them to strictly restrict access. Cut off the fire. It is recommended that emergency handlers wear self-contained positive-pressure respirators and fire protective clothing. Cut off the source of the leak if possible. If it is gas, cover the sewer near the leak with an industrial coating or absorbent/absorbent to prevent gas from entering.

Reasonable ventilation to accelerate diffusion. Spray water is diluted and dissolved. Construct a large amount of wastewater generated by the construction of a dike or pit. If possible, use the exhaust fan to send the brutal residual gas or leaked gas to the washing tower or the fume hood connected to the tower.

The leaking container should be properly handled, reused after repair and inspection. If liquid, absorb with sand, vermiculite or other inert materials. If there is a large amount of leakage, construct a dyke or dig to contain it; cover it with foam to reduce the steam disaster.

Use the explosion-proof pump to transfer to a tanker or special collector, recycle or transport to waste disposal place for disposal. The storage tank area is best equipped with dilute acid spraying facilities.

Waste disposal method: Use controlled incineration. The nitrogen oxides discharged from the incinerator are removed by a scrubber or a high-temperature device.

Respiratory protection: When the concentration in the air exceeds the standard, wear a filtering gas mask (half-mask). It is recommended to wear an oxygen respirator or air respirator for emergency situations or rescue.

Others: Smoking, eating, and drinking are strictly forbidden at the worksite. After work, take a shower and change clothes.

Eye contact: Raise the eyelids immediately and rinse thoroughly with plenty of running water or saline for at least 15 minutes. Seek medical attention.

Inhalation: Quickly leave the scene to fresh air. Keep your airways open. If breathing is difficult, give oxygen. If not breathing, give artificial respiration immediately. Seek medical attention.

Fire fighting method: cut off the air source. If the gas source cannot be cut off immediately, the burning gas is not allowed to be extinguished. Spray water to cool the container. If possible, move the container from the fire to an open area. Fire extinguishing agent: mist water, alcohol-resistant foam, dry powder, carbon dioxide.