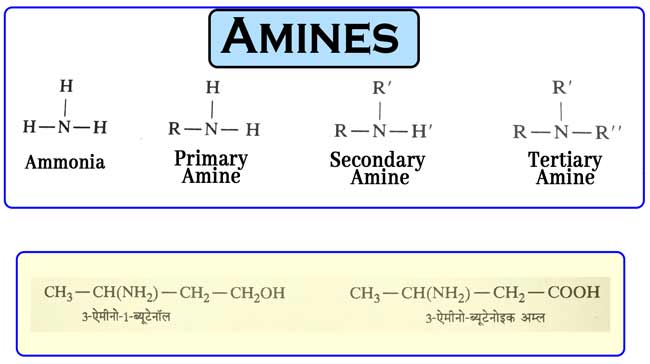 The alkyl derivatives of ammonia are called amine. In other words, the compounds that are obtained when the hydrogen atoms in the ammonia molecule are replaced by an equal number of alkyl groups. They are called amine.

They are divided into three classes based on the number of alkyl groups associated with the nitrogen atom in amines.

The alkyl group present in secondary and tertiary amines can be the same or different. These structures represent R, R ‘, R’ ‘alkyl group.

Those other compounds are also called amine, In which nitrogen atom is attached to some other groups but their properties are similar to the properties of these compounds. Example:-

The IUPAC names of secondary and tertiary amines are written in a similar way, but N – alkyl and N also use N–di alkyl precursors to indicate the presence of other alkyl groups.

Following are the common and IUPAC names of some amines.

If the amines group present in a compound is not the predominant functional group, then for this, pre-existing amines are used.

This type of isomerism is caused by the differing chain structure of carbon atoms.

This type of isomerism occurs because of the location of the amines group in the chain of carbon atoms.

This type of isomerism is caused by the variation of the size of the groups connected on both sides of the same nitrogen atom.

The basic Character of Amines

Like ammonia, lone pair of electrons are present on the nitrogen atom and amines compounds are also basic. Due to the + I effect of alkyl groups, they displace electrons from themselves.

Hence the availability of lone pair of electron on nitrogen atoms in amines increases. Therefore, aliphatic amines are more potent than compound ammonia.

The sequence of incineration of secondary and tertiary amines is not consistent with the induction effect. This can be explained on the basis of hindrance in the reaction due to steric effect i.e. presence of large size groups near the reaction center.

The following is the decreasing order of some amines carbonic compounds and the strength of ammonia.

Due to the basic properties of amines compounds, they react with acids to form salts. These salts are alkyl derivatives of ammonium salts. Salts in which nitrogen atom is attached to four alkyl group. And forms a legitimate connector. They are called quarternary ammonium salt.