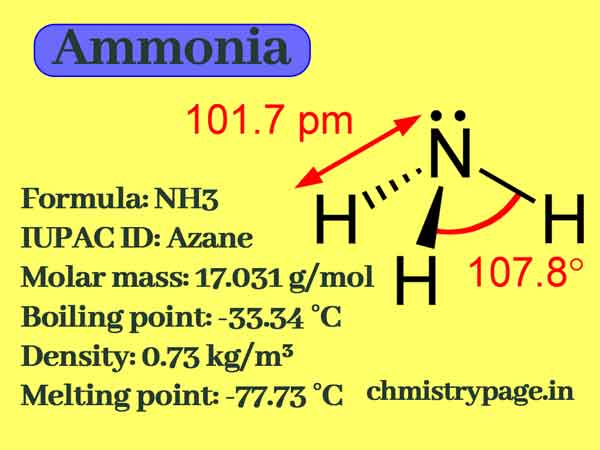 Ammonia, nitrogen and hydrogen in the compound, of the formula NH₃, is a colorless gas with a strong irritating odor. It is easily soluble in water, and 1 volume of water can dissolve 700 times the volume of ammonia under normal temperature and pressure.

The aqueous solution is also called ammonia. Cooling and pressurizing can turn into liquid. Liquid ammonia as a refrigerant. Ammonia is also an important raw material for the manufacture of nitric acid, fertilizers, and explosives.

Ammonia is very important to living things on earth. It is an important component of many foods and fertilizers. Ammonia is also a direct or indirect component of all drugs. Ammonia has a wide range of uses, and it also has corrosive and dangerous properties.

Because ammonia has a wide range of uses, ammonia is one of the most produced inorganic compounds in the world, and more than 80% of ammonia is used to make chemical fertilizers. Because ammonia can provide lone pair electrons, it is also a Lewis base.

Ammonia can be burned in pure oxygen, and the product is a component in the air, which does not pollute the environment, so it has a certain application prospect:

The catalytic oxidation of ammonia is an exothermic reaction, and the product is NO, which is an important reaction for the industrial production of nitric acid, provided that the catalyst is at a high temperature:

In addition, it can be reduced in the following reactions:

Ammonia is very easily soluble in water. When dissolved in water, it reacts with water to form ammonia monohydrate, commonly known as ammonia. The concentration of commercially available ammonia is 25% to 28%. Ammonia is weakly alkaline because of the ionization in water:

NH 3 can also complex with metal ions such as Ag, Cu, etc. to form complexes:

Ammonia can react with acids to form ammonium salts, such as:

Ammonia reacts with volatile acids (nitric acid, hydrochloric acid) to emit white smoke. These reactions can be used to check the presence of ammonia.

Ammonia has a stimulating effect on the eyes, nose, and throat of the human body. Inhalation of a large amount of ammonia can cause short-term nasal congestion and cause suffocation. Eye contact is prone to tears. Be careful when contacting.

In case of accidental exposure to excessive ammonia, inhale fresh air and water in time, and flush eyes with plenty of water.

(2) Density is lower than air

The density of ammonia is 0.771g / L (under standard conditions)

Ammonia is very easy to liquefy, and it is cooled to -33.34°C under normal pressure or pressurized to 700KPa to 800KPa at normal temperature, and gaseous ammonia liquefies into a colorless liquid, and at the same time emits a lot of heat.

Liquid ammonia absorbs a large amount of heat during vaporization, which causes the temperature of surrounding substances to drop sharply, so ammonia is often used as a refrigerant. Some old-fashioned popsicles were made from ammonia

Ammonia is very soluble in water. At normal temperature and pressure, 1 volume of water can dissolve about 700 volumes of ammonia.

Fill a 250ml flask with ammonia and place it in a phenolphthalein solution tank. You will see a red fountain.

The main uses of ammonia are nitrogen fertilizers, refrigerants, and chemical raw materials.

In the production, transportation, storage and use of ammonia, if the pipelines, valves, storage tanks are damaged, leakage of ammonia can cause poisoning. Ammonia has irritating and corrosive effects on the skin and mucous membranes.

Ammonia meets water in human tissues to produce ammonia water, which can dissolve tissue proteins and play a role in saponification with fat. Ammonia can destroy the activities of various enzymes in the body and affect tissue metabolism. Ammonia has a strong stimulating effect on the central nervous system.

Weakened or even disappeared, and thus the peripheral low-level center was excited. Causes convulsions, convulsions, lethargy and coma. Inhalation of extremely high concentrations of ammonia can cause cardiac arrest and respiratory arrest reflexively.

2. Ammonia-based alkaline substances, ammonia water has a strong corrosive effect. Alkaline burns are more serious than acidic burns, because alkaline materials have strong penetrability, and ammonia water burns on the skin are deep, susceptible to infection, and difficult to heal, similar to 2nd-degree burns.

3. Ammonia is inhaled into the airways to meet with water to form ammonia water. Ammonia can penetrate into the submucosa, interstitial lungs, and capillaries through the mucosa, alveolar epithelium, and cause:

(1) Vocal cord spasm, edema of the throat, and tissue necrosis. Necrosis can cause suffocation. Damaged mucosa is susceptible to a secondary infection.

The harm of ammonia to people

Mild poisoning: pungent sensation in the eyes, nose, and throat, tearing, coughing, sneezing, sputum, blood coughing, chest tightness, headache, dizziness, and fatigue (liquid ammonia splashed into the eyes, the eyelids should be opened immediately to allow ammonia to flow out, And clean with water in time.) Clinical examination showed conjunctive, nasal, and pharyngeal mucosa congestion, audible and dry sounds in the lungs.

1. Quickly leave the poisoning scene and breathe fresh air or oxygen. Respiratory stimulants may be used when breathing is shallow or slow. Cardiopulmonary resuscitation should be performed immediately for those who have stopped breathing or heartbeat. It should not be easily abandoned. Laryngeal spasm and vocal cord edema should be intubated or tracheotomy quickly.

5. Patients with coma use a 250% 20% mannitol intravenous injection, once every 6 to 8 hours, to reduce intracranial pressure.

⑴ A small amount of leakage.

All personnel in the evacuation area. Prevent inhalation of vapors and contact with liquids or gases. Disposal personnel should use respirators. Prohibit access to confined spaces where ammonia may collect and increase ventilation.

Plugging can only be done under conditions of safety. Leaked containers should be transferred to a safe area and the valve should only be opened to relieve pressure if safety is ensured. ammonia formula

Leaks can be collected and absorbed with inert absorbent materials such as sand and vermiculite. Collected spills should be placed in sealed, appropriately labeled containers for disposal.

Evacuate all unprotected personnel on the premises and move upwind. Spill personnel should wear fully-enclosed heavy chemical protective clothing, wear air respirators, and after taking personal protective measures, dilute the leakage area with spray water. Through the dilution of the water gun, the ammonia on the site is gradually dispersed, and the leak point is blocked with a non-sparking tool.

It is forbidden to contact or cross the leaked liquid ammonia, prevent the leakage from entering the sewers and drainage channels, and enhance ventilation. Smoking and naked flames are prohibited on the premises.

When safety is ensured, the leaking container should be blocked or turned over to avoid leakage of liquid ammonia. Spray water to suppress the flow of steam or change the direction of the vapor cloud, but it is prohibited to directly impact the leaked liquid ammonia or the source of the leak.

Prevent leaks from entering water bodies, sewers, basements or confined spaces. Do not enter restricted spaces where ammonia can collect. After cleaning, decontaminate all protective clothing and equipment before storing and reusing.

During storage and transportation, if a fire occurs, the following measures should be taken:

1)Alarm: promptly report to local 119 fire and government. The contents of the alarm should include. the accident unit, the time, place, chemical name, and degree of danger of the accident, whether there were any casualties, and the name and telephone number of the alarm person.

2) Isolate, evacuate, and transfer distressed people to a safe area, establish a warning zone of about 500m, and implement traffic control on the main road leading to the accident site. Except for firefighters and emergency response personnel, other personnel is prohibited from entering the warning zone and quickly evacuated. Unrelated persons.

6) when the safety valve makes a sound or changes color, evacuate as soon as possible and do not stay at both ends of the storage tank.

(4) To prevent skin contamination, 5% boric acid ointment can be used.

(6) For emergency rescue, you must wear an air respirator.

(7) Strengthen the sealing and automation of the production process to prevent running, running, dripping and leaking. ammonia formula

(8) Installed ammonia monitor on-site to report to the police in time.

The Facts about Ammonia

What does the catalytic Reaction do? ||catalytic reaction information