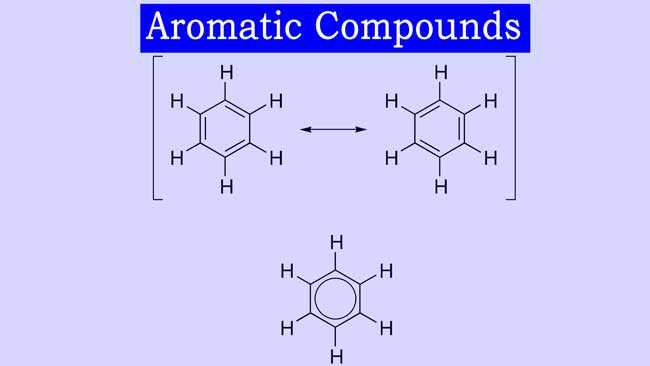 Such compounds have been obtained from natural sources such as resins, balsam and bitter almond oil, which contain special type of smell.

These compounds are called aromatic compounds due to their special type of smell. The word aromatic originated from the Greek aroma meaning aroma.

Therefore, benzene, derivatives of benzene and other compounds that have properties and structure similar to benzene are called aromatic compounds.

The following substances are mainly found by heating bituminous coal in the retorts of fire clay in the absence of air at 1000 – 14oo°C.

Coal gas: This gas is used to produce fuel and light.

Ammonical liquor: This fluid is used to make ammonia.

Coal Tar: It is a black thick liquid. From this benzene and benzene are derived.

Coke: This solid substance remains as a residue in ritart which is used as a reducing agent in fuel and metal extraction.

The aromatic compound exhibits halogenatioin, nitration, sulphonation, and other substitution reactions easily. In these reactions, one or more hydrogen atoms present in the benzene cycle are displaced by other atoms or groups.

There are three types of aromatic substitution reactions depending on the nature of the invagination reagent.

Following is the mechanism of electrophilic aromatic substitution reactions

This procedure is written for benzene. And E represents electrophilic.

In this reaction one or more hydrogen atoms are displaced by halogen atoms. The halogenation of the aromatic compound is usually carried out by the reaction of halogen in the presence of halogen carrier such as Fe or FeCl3 in the dark.

The reaction of HNO3 and H2SO4 results in the formation of nitronium ion(NO2+), which acts as an electrophile.

In this reaction one or more hydrogen atoms are displaced by sulphonic acid group(-SO3H). They are often heated with fuming sulphuric acid to perform sulphonation of aromatic compounds.

SO3 or SO3H + act as an electrophile in this reaction.

In this reaction, one or more hydrogen atoms present in the benzene cycle are displaced by the alkyl group. This reaction is performed by the reaction of aromatic compounds with an alkyl chloride in the presence of a lewis acid such as FeCl3 or AlCl3.

In this reaction, CH3+ is obtained by the action of AlCl3 and CH3Cl which act as electrophile.

In this reaction, benzene is displaced by one or more hydrogen acyl group(RCO-) such as acetyl group(CH3CO-) present in the cycle. This reaction is performed by the reaction of the aromatic compound with an acyl halide(RCOCl) such as acityl chloride(CH3COCl) in the presence of a luwis acid such as FeCl3 and AlCl3.

In this reaction, CH3CO+ is obtained by the reaction of AlCl3 and CH3COCl. Which performs the function of electrophile. 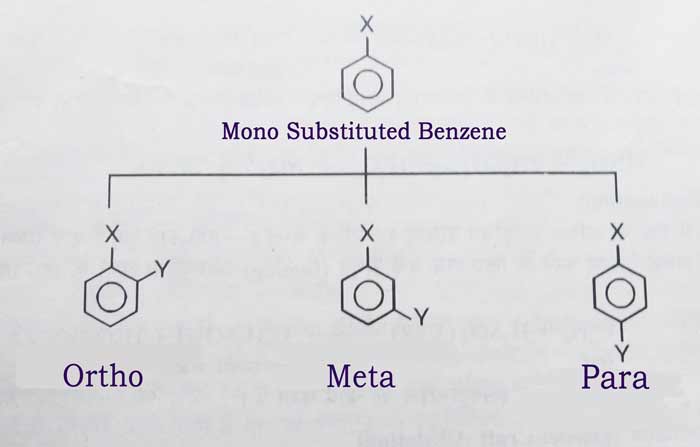 Which place the new group (Y) occupies determines the already existing group (X). This effect of an already present group is called directive influence. It is found that there are two types of group (X) –

Several rules have been formulated from time to time to find Directive Influence of Groups, of which the following are the main rules.

These rules are empirical rules on experiences. They have no theoretical basis.

Example: The + M effect of chlorine atom in chlorobenzene increases the electon density of ortho and para conditions.

Example: The -M effect of the -COOH group in benzoic acid reduces the electron density of the ortho and para positions.