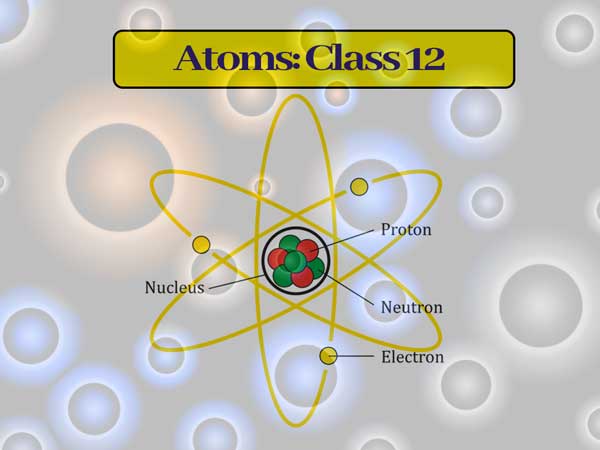 Thomson’s model of the atom: It was proposed by J. J. Thomson in 1898. According to this model, the positive charge of the atom is uniformly distributed throughout the volume of the atom and the negatively charged electrons are embedded in it like seeds in a watermelon.

Rutherford and his two associates, Geiger and Marsden, study the scattering of the α-particles from a thin gold foil in order to investigate the structure of the atom.

– Most of the α-particles pass through the gold foil without any deflection. This shows that most of the space in an atom is empty.

This graph shows the deflection of a number of particles with an angle of deflection q.

Rutherford’s nuclear model of the atom:

According to this the entire positive charge and most of the mass of the atom is concentrated in a small volume known as the nucleus with electrons revolving around it just as planets revolve around the sun.

Bohr’s model: Bohr combined classical and early quantum concepts and gave his theory of hydrogen and hydrogen-like atoms which have only one orbital electron. His postulates are

An electron can revolve around the nucleus only in certain allowed circular orbits of definite energy and in these orbits, it does not radiate. These orbits are known as stationary orbits.

How do you make lead tetroxide? Red Lead or Minium

What do you mean by Benzene? Preparation and Properties