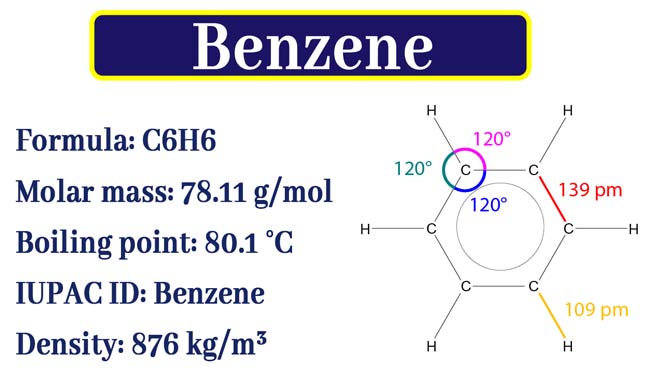 In the laboratory, benzene is made by distillation of sodium benzoate and soda lime.

A round bottom distillation flask takes about 30 grams of sodium benzoate and about 45 grams of soda lime. Gently heat the condenser by placing it in the flask.

Benzene is collected as distilled with water. The benzene being insoluble in water forms a separate surface with water, which is separated by a practical funnel. Thus obtained benzene is dried on anhydrous calcium chloride to obtain pure benzene by re-distillation.

Berthelot synthesized benzene from acetylene in 1870 when acetylene is transported into the red heated tube and benzene is obtained.

Benzene is obtained by reduction of Chlorobenzene by Ni – Al alloy and NaOH.

Benzene is obtained by heating Phenol with zinc powder.

Benzene is obtained by boiling Benzenesulfonic acid with dilute HCl or dilute H2SO4, or when heated with steam.

It is obtained from the efficient distillation of Coal tar in commercial quantities.

When distillation of Coal tar at 170°C a fractional liquid obtained. It is called light oil. It is lighter than water.

Now the light oil is washed with water. Due to which acidic elements are removed. In this way, efficient distillation of purified oil is done, which gives the following effect.

Solvent naphtha or benzoic 140 – 170°C – It is used in dissolving dyes, rubber and resins, on re-effecting distillation of the above constituents, benzene at 80°C gives toluene at 110°C and xylene at 135°C.

It’s C6 – C8 component is heated at high pressure and high temperature in the presence of appropriate catalysts to form benzene, toluene and xylene from petroleum.

In this action, benzene toluene and xylene are obtained as a result of aromatisation of aliphatic and alicyclic hydrocarbons. This action is called catalytic reforming or plat forming. Its ingredients are separated by Fractional distillation from a mixture of benzene, toluene and xylene.

Benzene is a colourless, volatile, flammable and distinctly smelling liquid. Its boiling point is 80.4°C and freezing point is 5.4°C. It is insoluble in water and due to being lighter than water, forms a separate surface over the water.

It is soluble in alcohol, ether and chloroform. It is a good solvent for resins, fats, sulphur and iodine.

The chemical reactions of benzene can be divided into three parts.

Cyclohexane is obtained as a result of high pressure in the presence of nickel or platinum and the addition of benzene and hydrogen at about 250°C.

Benzene Hexachloride is obtained as a result of the reaction of chlorine with benzene in the presence of sunlight (hv).

Banzene Hexachloride is also known as BHC, gammaxene, Lindane or 666. It is a strong germicide. The addition of benzene to bromine is similar.

By heating at 450°C in the presence of vanadium pentoxide(V2O5), it is oxidized by oxygen in the air to form a maleic anhydride.

Benzene reacts with chlorine or bromine at room temperature in the absence of sunlight and in the presence of halogen carriers such as Fe or FeCl3 to form replacement products.

Benzene reacts with concentrated nitric acid in the presence of concentrated sulfuric acid to form nitrobenzene.

This reaction occurs at a slower rate than normal temperature and faster at increasing temperature. At higher temperatures and greater use of nitric acid, di and tri substitution products ie m-dinitro benzene and 1,3,5 tri-nitro-benzene are obtained.

Benzaldehyde is obtained when a mixture of carbon mono oxide and hydrogen chloride gas flows into benzene in the presence of AlCl3. This reaction is called Gattermann Koch Aldehyde Synthesis.

Benzaldehyde is obtained when a mixture of carbon mono oxide and hydrogen chloride gas flows into benzene in the presence of AlCl3. This reaction is called Gattermann Koch Aldehyde Synthesis.

benzene chloride is obtained when a mixture of pharmaldehide and HCl gas flows into benzene in the presence of anhydrous ZnCl2. In this reaction, a hydrogen atom present in the benzene ring is displaced by a chloromethyl (-CH2Cl)group.

It is also used in dry cleaning of clothes.

A mixture of benzene and petrol is used as fuel in motor cars.

How to make Hydrogen peroxide?

Why are Gas Laws Important in Chemistry? Gas Laws Chemistry