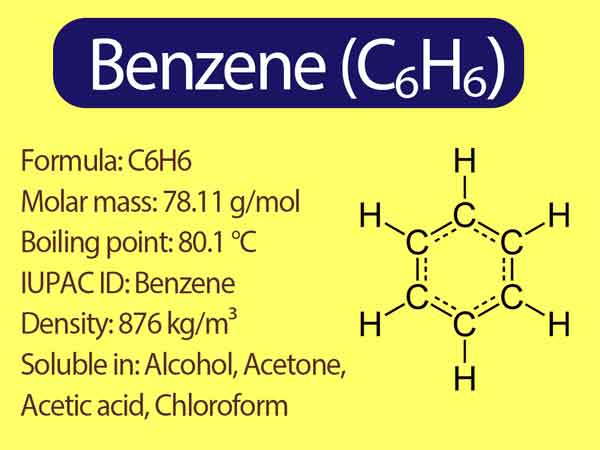 Based on the quantitative determination of elements and the use of molecular weight determination, it is known that the molecule formula of benzene is C6H6.

Open chain structures of benzene are not possible due to the following reasons.

I – The above structures demonstrate that, like ethylene and other aliphatic unsaturated hydrocarbons, benzene will also color Br2/CCl4 and change the color of the Bayer reagent. Benzene does not do this. Hence the above structure of benzene is defective.

II – Benzene exhibits halogensation, nitrification, sulfonization, and other substitution reactions easily. In these reactions one or more hydrogen atoms present in the benzene molecule are displaced by other atoms or groups.

III – Aliphatic unsaturated hydrocarbons do not exhibit this type of reaction. Therefore, these reactions of benzene cannot be explained on the basis of the above structures.

Wide chain structures of benzene ring are not possible. Hence its structure is cyclic. There are three twins in it. This gives only one mono-substitution product, meaning that the positions of all six hydrogen atoms in it are the same. Based on these facts, its three cyclical structures are possible.

On this basis, structures I and II of benzene are not possible and structure III is possible structure of benzene. This structure was proposed by kekule in 1865 and is called Kekule structure.

The two-substituted products of Structure III are as follows:

A closer study of structure III suggests that two ortho products are possible.

Since the two Ortho-replacement products rapidly change into each other, they cannot be separated and are considered to be the same product.

The formula of Kekule gives satisfactory explanation of most of the properties of benzene but there are some deficiencies left in it.

Three carbon-carbon bifurcations are present in the Kekule structure of benzene. Despite this, benzene additive reactions do not show up easily. It does not change the color of Br2 / CCl4 and does not change the color of the Bayer reagent. In contrast, benzene substitution reactions are simpler. This behavior of benzene is not clear by the Kekule formula.

According to modern ideas the structure of benzene is clarified based on the following concepts.

According to this concept, benzene is considered to be a resonance hybrid of both kekule’s structures. 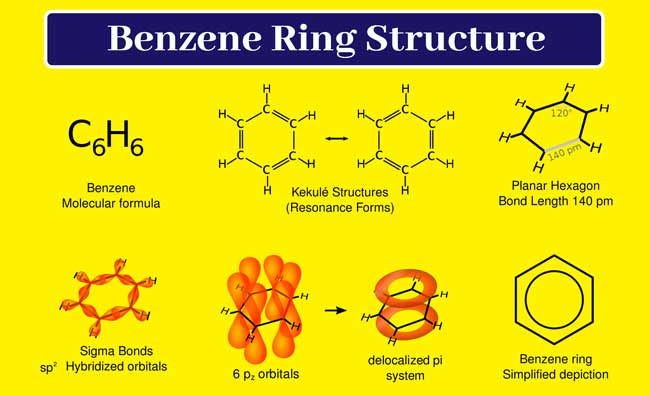 Thus these 6 carbon atoms form a rhombus in benzene having C – C -H and C – C -C bond angles of 120° and one unused P orbital remaining on each carbon atom. All these p orbitals are parallel to each other.