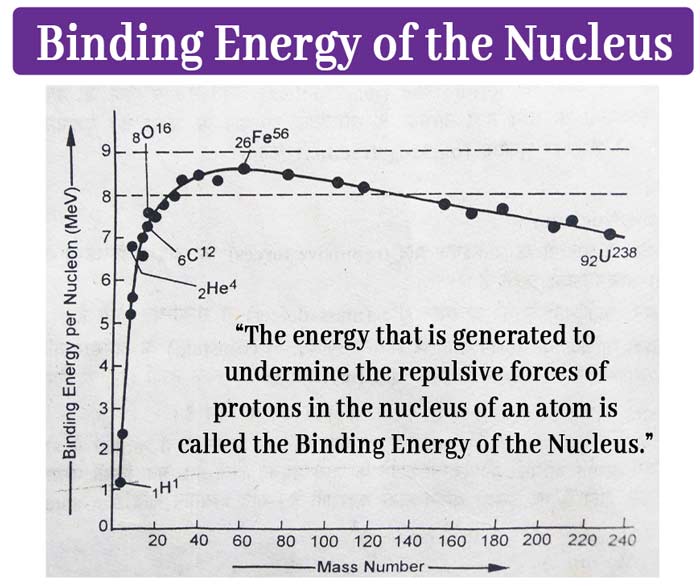 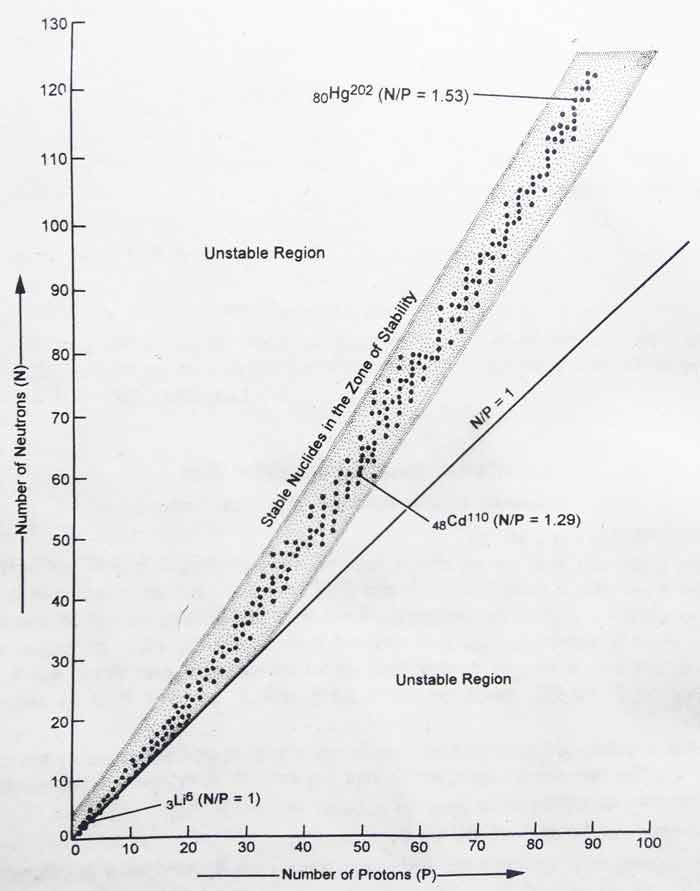 1) The value of N/P is about 1 for the stability of light nuclei.

Example: For the nucleus of 3Li6, the value of N/P is 1 and it is permanent.

4) All atoms with 84 or more than 84 atomic numbers have temporary nuclei.

Based on the even and odd numbers of protons and neutrons in the permanent nucleus, the following conclusions are obtained –

The actual masses of atoms are often less than the total mass of their electron protons and neutrons.

Hence, the actual mass of nuclei of atoms is often less than the sum of the mass of their protons and neutrons.

The mass defect per Nucleon is called packing fraction.

Binding Energy of the Nucleus

The energy that is generated to undermine the repulsive forces of protons in the nucleus of an atom is called the binding energy of the nucleus.

According to scientists, the energy produced by the mass defect of the nucleus of the atoms is used to make the nuclei permanent, which is unaffected by the repulsion of the protons in the nucleus.

Therefore, the energy generated in an atom related to mass loss is called its binding energy. If mass is Δm amu then the binding energy

So 1 amu mass defect is equal to 931 MeV binding energy.

The curve obtained when drawing a graph in the number of binding energy per nucleon and mass is shown in the figure. This curve provides important conclusions regarding the stability of the nucleus. 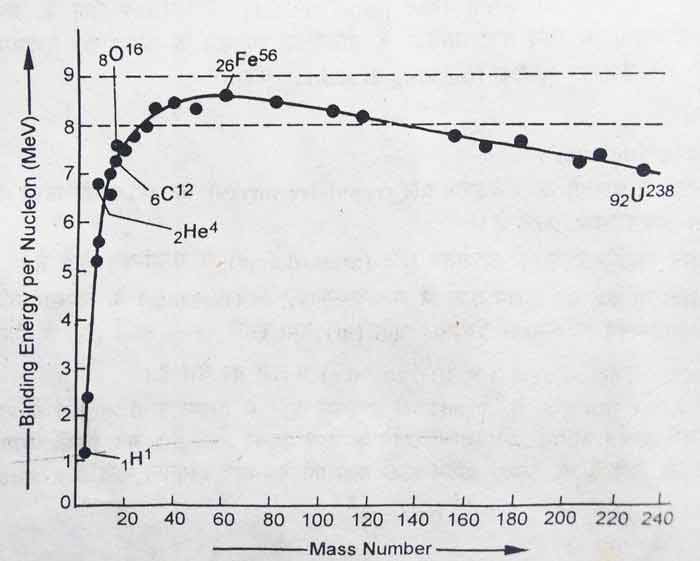 By observing the curve of binding energy, it is clear that –

i) Atoms whose mass numbers are around 60 – such as iron, cobalt, nickel and copper have the most permanent nuclei. Iron is found in abundance in the earth because the binding energy of 26Fe56 is the highest per Nucleon (Near about 8.7 MeV).

Since positively charged nuclei repel each other, it is not easy to initiate the reaction of a nucleus solution, so light nuclei do not attach automatically.

The Sun’s high temperature and hydrogen bomb are the main examples of nuclear fusion.

iii) The points of 4Be8 6C12 and 8O16 are above the normal position in the binding energy curve. Hence the stability of these nuclei is more than normal.

Hence it can be assumed that their nuclei are made up of 2, 3 and 4 helium nuclei. On this basis, the reason for the emission of a particles from the radioactive substrate can be elucidated.

iv) The binding energy of heavier nuclei such as U-238 is lower than that of nuclei with mean mass numbers per Nucleon, such as Fe-56 Pb-206.

How to find Equivalent Weight in Chemistry ? Chemical Formula