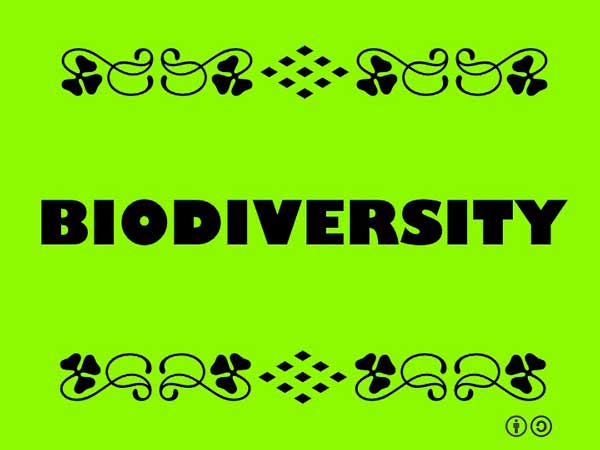 Biodiversity and Conservation: Biodiversity (Gk bios = life, diversity = forms) or biological diversity can be defined as the vast array of species of microorganisms, algae, fungi, plants and animals occurring on the earth either in the terrestrial or aquatic habitats and the ecological complexes of which they are apart. This includes diversity within species, between species and of the ecosystem.

The Western Ghats and North-East.

Ecosystem diversity is of 3 types:

Alpha (α) diversity (within community diversity) refers to the diversity of organisms i.e., the number of species in a given community or habitat. It is calculated by the combination of species richness and evenness or equitability.

Beta (β) diversity (between community diversity) is diversity which develops due to change in a habitat or community along environmental gradients like altitude, latitude, moisture gradient, etc. The greater the difference or turnover of species between the habitats, the greater is the beta-diversity.

Gamma (γ) diversity is also called regional diversity. It represents the total richness of species in all the habitats found within a region, geographical area or landscape. When each habitat has a unique biota, gamma diversity is equal to average alpha diversity multiplied by the number of such habitats.

Species diversity decreases as we move away from the equator towards the poles. It increases in temperate areas but reaches the maximum in tropical rain forests. Maximum diversity occurs in the Amazon rain forest of South America.

Reasons behind the maximum biological diversity in tropical regions are:

Prolong evolutionary time: Speciation is generally a function of time, unlike temperate regions subjected to frequent glaciations in the past, tropical latitudes have remained relatively undisturbed for millions of years and thus, had a long evolutionary time for species diversification.

High productivity: There is more solar energy available in the tropics, which contributes to higher productivity; this, in turn, might contribute indirectly to greater diversity.

Within a region, the species richness increases with the increasing area but up to a certain limit. The relationship between species richness and area is a rectangular hyperbola for a wide variety of taxa whether they are birds, bats, freshwater fishes or flowering plants.

On a logarithmic scale, it is a straight line.

Here, S is species richness, Z is the slope of the line or regression coefficient, C is Y-intercept while A is area.

Regression coefficient is generally 0.1–0.2 regardless of taxonomic group or region. However, when the species-area relationship is considered for a very large area like a whole continent, regression coefficient or slope of the line comes to have Z value of 0.6–1.2, e.g., for frugivorous birds and mammals of tropical forests of different continents, the slope is found to be 1.15.

Importance of species diversity to ecosystem can be explained by:

Diversity-stability hypothesis: According to Johnson et al 1996, the ecological communities will decrease in ability to recover from disturbance and in productivity if there is reduction in species richness.

Rivet popper hypothesis: According to this hypothesis proposed by Stanford ecologist Paul Ehrlich (1981), the relationship between species richness and ecosystem functioning is non-linear, but may follow a variety of possible trajectories. The loss of a few species (or rivets holding together an airplane) will initially create no problem, but beyond a certain point, losses will cause catastrophic effect.

The most serious aspect of the loss of biodiversity is the extinction of species.

Natural or background extinction is a slow process of replacement of existing species with the better adapted species due to alternate evolution, changes in environmental conditions, predators and diseases. Earth has experienced five mass extinctions due to environmental catastrophes. Anthropogenic extinctions are extinctions abetted by human activities like settlements, hunting, over exploitation and habitat destruction.

IUCN is the International Union of Conservation of Nature and Natural Resources which is now called World Conservation Union (WCU). It maintains a red data book or red list which is a catalogue of taxa facing risk of extinction.

There are three main reasons to conserve the biological diversity which can be grouped into three categories:

(iii) Ethical Utilitarian-every living species has an intrinsic value though it may not have any direct economic value, and also, every species has a right to live.