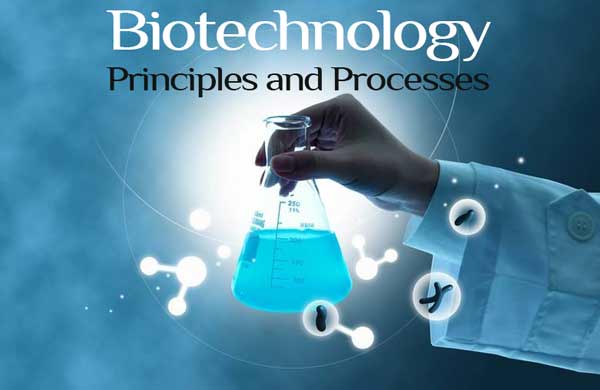 The term biotechnology is derived from the fusion of biology and technology. Biotechnology means any technological application that uses biological systems, living organisms or their derivatives to produce or modify products or processes for a specific use.

The definition of biotechnology given by the European Federation of Biotechnology (EFB) which covers both traditional views and modern molecular biotechnology is as follows: “Biotechnology is the integrated use of biochemistry, microbiology, and engineering sciences in order to achieve technological application of the capabilities of microorganisms, cultured tissues/cells and parts thereof.”

The science of biotechnology is mainly based on two core technologies:

Genetic engineering is the technology involved in the synthesis of artificial genes, repair of genes through fusion, deletion, inversion, shifting of genes, products of recombinant DNA & manipulating them for improvement in human beings, plants, animals and microbes.

(i) Identification of DNA with desirable genes

(ii) Introduction of the identified DNA into the host

Restriction endonuclease was isolated for the first time by W. Arber in 1962 in bacteria. In 1978, Arber, Smith, and Nathan were awarded the Nobel Prize for the discovery of restriction endonucleases. These enzymes recognize the base sequence at palindrome sites in DNA duplex and cut its strand.

The palindromes in DNA are base pair sequences that show the same sequence on both the strands when reading forward (left to right) or backward (right to left) from a central axis of symmetry.

For example, restriction endonuclease EcoRI found in the colon bacteria E. coli recognizes the base sequence GAATTC in DNA duplex and cuts the DNA strands between G and A as shown here:

(i)Type II restriction enzymes are named for the bacterium from which they have been isolated For example EcoRI enzyme has been isolated from, Escherichia coli the bacterium RY13. (ii) The first letter used for the enzyme is the first letter of the bacterium’s genus name (in italics), (iii) then comes the first two letters of its species (in italics). (iv) The fourth letter of the name of the enzyme is the letter of strain. (v) The end of the name is a Roman numeral, which indicates the order in which the enzyme was isolated.

The functioning of the Restriction Enzyme

Modification System. The molecular basis of this system was first explained by Wemer Arber in 1965. The restriction-modification system consists of restriction endonucleases and a modification enzyme.

The vectors are DNA molecules that can carry a foreign DNA segment and replicate inside the host cell.

Out of these vectors, plasmid vectors and bacteriophage vectors are commonly used.

Plasmids are extra-chromosomal, self-replicating, usually circular, double-stranded DNA molecules, found naturally in many bacteria and also in some yeast.

Plasmids are usually not essential for normal cell growth and division, but they often confer some traits to the host organism e.g., resistance to certain antibiotics.

Bacteriophages (a virus that eats upon bacteria) are required for the cloning of large DNA fragments.

Two phages that have been extensively modified for the development of cloning vectors are lambda phage and M13 phage.

Lambda phage vector has a double-stranded, linear DNA genome of 48, 502 bp, in which the 12 bases at each end are unpaired but complementary.

These vectors allow cloning of DNA fragments up to 23 kb in length.

M13 phage vector is a filamentous phage that infects E. coli having F-pili. Its genome is a single-stranded, circular DNA of 6407 bp.

The cosmids (like pJC74, pJC720 etc.) can be defined as the hybrid vectors derived from plasmids and phage l which contain cos site.

A valuable feature of the cloning vector is the presence of specific restriction sites (or cloning sites), where the enzyme restriction endonucleases make a cut so that a foreign DNA segment may be introduced (joined) to the vector. This property helps a vector to act as a trusted cloning vehicle during gene transfer in genetic engineering. The ligation of alien DNA is carried out at a restriction site present in one of the antibiotic resistance genes.

The competent host is essential for transformation with recombinant DNA. Since DNA is a hydrophilic molecule, it cannot pass through membranes, so bacterial cells must be made capable to take up DNA. This is done by treating them with a specific concentration of a divalent cation, such as calcium ion which increases the efficiency.

Various kinds of vectors e.g., pBR322, l phage, etc. are used to introduce DNA into many kinds of host cells, including E. coli, yeast, animal and plant cells available for genetic engineering. For the expression of some eukaryotic proteins, eukaryotic cells may be the preferred hosts.

Yeasts have been used extensively for functional expression of eukaryotic genes because they are the simplest eukaryotic organisms and like bacteria are single-celled, genetically well Characterised, easy to grow and manipulate.

Isolation of the genetic material (DNA)

In order to cut the DNA with restriction enzymes, it needs to be in pure form, free from other macromolecules.

This can be achieved by treating the bacterial cells/plant or animal tissue with enzymes such as lysozyme (bacteria), cellulase (plant cells), chitinase (fungus).

The purified DNA finally precipitates out after the addition of chilled ethanol. This is seen as a collection of the threads in suspension.

Cutting of DNA at Specific locations

Agarose gel electrophoresis is employed to check the progression of a restriction enzyme digestion.

‘Gene of interest’ from the source DNA and the cut vector with space are mixed and ligase is added. This results in the preparation of recombinant DNA.

If required, the gene of interest is amplified using PCR.

Insertion of recombinant DNA (rDNA) into a host cell/organism

Eukaryotic genes do not function properly when cloned into bacterial cell, because of introns.

In such cases, DNA is made from mRNA by reverse transcription or synthesised artificially.

This rDNA is inserted into the host bacterium by transformation using a cold CaCl2 solution. The bacterial cell containing the desired rDNA is selected using selective antibiotics in the culture medium.

When recombinant D X NA is transferred into a bacterial, plant or animal cell, the foreign DNA also multiplies. Most of the recombinant technologies are aimed to produce a desirable protein.

After the cloning of gene of interest, one has to maintain the optimum conditions to induce the expression of the target gene and consider producing it on a large scale.

These steps have been summarised in the flow chart:

Bioreactors are considered as vessels in which raw materials are biologically converted into specific products by microbes, plant and animal cells or their enzymes.

Bioreactor provides the optimal growth conditions such as temperature, pH, substrate, vitamins, oxygen and salts for obtaining the desired product.

(i) Simple stirred tank bioreactor and

In the sparged stirred-tank bioreactor, sterile air bubbles are sparged. The surface area for oxygen transfer is hence increased.

Microorganisms turn raw materials into products such as glucose into alcohol through fermentation. The two basic types of fermentation is possible batch fermentation and continuous culture.

After the formation of a product in bioreactors, it undergoes through a series of processes like separation and purification (collectively known as downstream processing) before it is ready for marketing as a finished product.

The downstream processing and quality control testing vary from product to product.

Fructose: How Fructose Converted into Glucose? | Structure and Formula