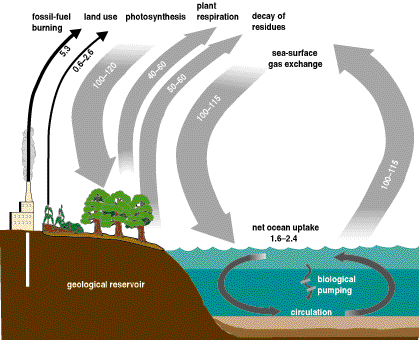 The carbon cycle refers to the phenomenon that carbon elements are exchanged in the earth’s biosphere, lithosphere, hydrosphere, and atmosphere, and they continue to cycle with the movement of the earth. The carbon cycle in the biosphere is mainly manifested in the absorption of carbon dioxide from the atmosphere by green plants, the conversion of photosynthesis into glucose and the release of oxygen with the participation of water, and the organism uses glucose to synthesize other organic compounds. Organic compounds pass through the food chain and become part of other organisms such as animals and bacteria. A part of the carbohydrates in the body is oxidized into carbon dioxide and water by respiration as the energy source metabolized by the organism and releases the energy stored therein.

During the carbon cycle, carbon dioxide in the atmosphere can be completely renewed in about 20 years. Most of the carbon in nature is stored in crustal rocks. The carbon in the rocks is decomposed by various natural and man-made chemical reactions into the atmosphere and the ocean.

At the same time, dead organisms and various other carbon-containing substances are constantly deposited Object forms return to the earth’s crust, thereby forming part of the global carbon cycle. The biogeochemical cycle of carbon controls the migration of carbon between surface or near-surface sediments and the atmosphere, biosphere, and oceans.

Introduction to the Carbon Cycle

The two largest carbon pools on the planet are lithosphere and fossil fuels, which contain about 99.9% of the total carbon on the planet. The slow carbon activity in these two reservoirs actually acts as a reservoir.

There are also three-carbon reservoirs on the earth: the atmospheric reservoir, the hydrosphere reservoir, and the biological reservoir. The carbon in these three pools is rapidly exchanged between the biological and inorganic environments, with a small and active capacity, which actually acts as an exchange pool.

Carbon mainly exists in the form of carbonates in the lithosphere, with a total amount of 2.7 × 1016 t, it exists in the atmosphere as carbon dioxide and carbon monoxide, with a total of 2 × 1012 t, in the hydrosphere in various forms Hundreds of biosynthetic organics exist in the biobank. The existence of these substances is regulated by various factors.

In the atmosphere, carbon dioxide is the main carbon-containing gas and the main form of carbon participating in the material cycle. In the biobank, the forest is the main absorber of carbon, and its fixed carbon is equivalent to twice that of other vegetation types. Forests are the main carbon storage in biological banks, with a storage capacity of approximately 4.82 × 1011 t, which is equivalent to 2/3 of the atmospheric carbon content.

Considering natural fires, more carbon is solidified by plants than by gasification by animals. Petroleum coal is a by-product of excess carbon solidification.

Circulation between living things and the atmosphere

Some (about one-thousandth) animal and plant residues are buried by sediments before they are decomposed into organic sediments. These sediments have been transformed into fossil fuels- coal, oil, and natural gas- under the influence of heat and pressure over a long period of time.

When they are burned during weathering or as fuel, the carbon in them is oxidized into carbon dioxide and discharged into the atmosphere. The human consumption of large amounts of fossil fuels has a significant impact on the carbon cycle.

On the one hand, the carbon in the sedimentary rock is decomposed by various natural and man-made chemical reactions into the atmosphere and the ocean; on the other hand, the death of organisms and other various carbon-containing substances are continuously returned to the earth’s crust in the form of sediments, thus It forms part of the global carbon cycle. Although the biological cycle of carbon has a great impact on the earth’s environment, from the perspective of millions of years of geological time, the slowly changing geochemical cycle of carbon is the main controlling factor of the earth’s environment.

The exchange between atmosphere and ocean

Formation and decomposition of carbon salts

Carbon dioxide in the atmosphere is dissolved in rainwater and groundwater to become carbonic acid. Carbonic acid can convert limestone into soluble bicarbonate and be transported by the river to the ocean. The content of carbonate and bicarbonate accepted in seawater is Saturated. As much carbonate as you enter, an equal amount of carbonate is deposited. Through different diagenetic processes, limestone, dolomite and carbonaceous shale are formed. Under the influence of chemical and physical (weathering), these rocks are destroyed, and the carbon contained in them is released into the atmosphere as carbon dioxide. A volcanic eruption can also cause a portion of the organic carbon and carbonates to re-add to the carbon cycle. The destruction of carbonaceous rocks has a small impact on the circulation in a short period of time, but it is important to the carbon balance over millions of years.

Incomplete combustion of fossil fuels produces small amounts of carbon monoxide. Natural processes also produce carbon monoxide. Carbon monoxide stays in the atmosphere for a short time and is mainly absorbed by microorganisms in the soil. It can also be converted into carbon dioxide through a series of chemical or photochemical reactions.

The role of forest ecosystems

The role of forest ecosystems in the carbon cycle When people realized that the rise of greenhouse gases, especially carbon dioxide, would cause global warming, which brought about a series of serious ecological and environmental problems, research on the carbon cycle was launched.

As a large carbon sink that absorbs carbon dioxide and releases oxygen, forest ecosystems play a very important role in the carbon cycle. The global forest area is 4.161 billion hectares, of which tropical, temperate and cold regions account for 32.9%, 24.9%, and 42.1%, respectively.

The role of forest ecosystems in the carbon cycle depends on the following:

Estimating the potential of carbon uptake from the age structure of forests is a major aspect that determines the function of carbon sinks in forest ecosystems.

Such as fuelwood, pulpwood and so on are short-term products, while plywood and construction wood are long-term products. To a large extent, the life of forest products also determines the carbon sink function of forest ecosystems.

Although this part of the carbon content in the entire forest ecosystem is small, it is also a carbon pool that cannot be ignored. Slowing down its precipitation and decomposition also plays a certain role in the carbon sequestration of the forest ecosystem.

The carbon content of forest soils worldwide is 660 to 927 GT, which is two to three times the above-ground level of forest ecosystems. Many scholars at home and abroad have recognized the important role of forest soil carbon pools and have carried out research on them. Research on soil carbon pools, their carbon cycle, and global change has become a new development direction of soil science.

Carbon is continuously cyclically changed among major carbon pools such as the atmosphere, land, and sea. Carbon in the atmosphere mainly exists in the form of gases such as carbon dioxide and methane, and mainly carbonate ions in water.

In the lithosphere, it is the main component of carbonate rocks and sediments, and in terrestrial ecosystems, it exists in vegetation and soil in the form of various organic or inorganic substances.

The size of the atmospheric carbon pool is about 720 Gt C, which is the smallest among several large carbon pools, but it is sufficient to connect the bonds and bridges of the ocean and terrestrial ecosystem carbon pools.

The amount of carbon in the atmosphere directly affects the entire earth system Material circulation and energy flow. The carbon-containing gases in the atmosphere mainly include carbon dioxide, methane, and carbon monoxide.

By measuring the content of these gases in the atmosphere, the size of the atmospheric carbon pool can be calculated. Therefore, compared to marine and terrestrial ecosystems, the amount of carbon in the atmosphere is the easiest to calculate and the most accurate.

About 30-50% of the carbon emissions caused by human speech will be absorbed by the ocean, but the ability of the ocean to buffer changes in the concentration of carbon dioxide in the atmosphere is not unlimited. The size of this ability depends on the number of cations that can be formed by rock erosion.

The rate of carbon emissions caused by human activities is orders of magnitude greater than the rate provided by Yangliyu. Therefore, on the millennium scale, as the concentration of carbon dioxide in the atmosphere continues to rise, the ability of the ocean to absorb carbon dioxide will inevitably gradually decrease. .

In addition, vegetation carbon pools and silt organic carbon pools also contain different sub-carbon pools, and their turnaround times are long or short, which has formed a so-called “temporary sink”.

For example, increased carbon dioxide concentration accelerates the growth of trees and forms carbon sinks. These trees generally survive for decades to hundreds of years, then decay and decompose, and return to the atmosphere through heterotrophic breathing.

Therefore, the carbon accumulation and carbon release of natural ecosystems are basically balanced on a longer time scale. Unless the intensity of the terrestrial ecosystem carbon pool increases, any carbon sink will sooner or later be balanced by the carbon source.

Among the world’s largest carbon monoxides, the lithosphere carbon pool is the largest. However, the turnover time of carbon in it is extremely long, more than about one million years, and it is the main component of carbonate rocks and sediments in the lithosphere.

The geochemical cycle of carbon

The geochemical cycle of carbon controls the migration of carbon between surface or near-surface sediments and the atmosphere, biosphere, and ocean, and is the most important control of atmospheric carbon dioxide and marine carbon dioxide.

The sediment contains two forms of carbon: kerogen and carbonate. During the weathering process,  Kerogen reacts with oxygen to produce carbon dioxide, but the weathering of carbonates is complicated. Magnesium carbonate and calcium carbonate contained in the dolomite and calcite minerals are attacked by groundwater to produce calcium, magnesium, and bicarbonate ions that are soluble in water. They are eventually carried into the ocean by groundwater.

In the biological cycle of carbon, after the carbon dioxide in the atmosphere is absorbed by plants, it is converted into organic matter through photosynthesis, and then converted from organic matter to carbon dioxide and enters the atmosphere through biological respiration and bacterial decomposition. The biological cycle of carbon includes the migration of carbon between animals, plants and the environment.

What is alcohol exactly?|| Reactivity order of alcohols