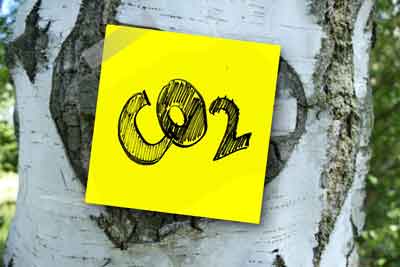 Carbon dioxide, a carbon oxide compound, has a chemical formula of CO2 and a chemical formula of 44.0095. It is colorless and odorless at normal temperature and pressure or colorless and odorless (no smell) The slightly sour gas is also a common greenhouse gas, and it is also a component of air (0.03% -0.04% of the total volume of the atmosphere).

In terms of physical properties, carbon dioxide has a boiling point of -78.5 ° C, a melting point of -56.6°C, a density greater than that of air (under standard conditions), and is soluble in water.

They cannot be burned and generally do not support combustion. They are acid oxides and have the generality of acid oxides. Since carbonic acid is formed by reaction with water, it is an anhydride of carbonic acid.

Carbon dioxide is generally produced by calcining limestone at high temperatures or by reacting limestone with dilute hydrochloric acid. It is mainly used in refrigerated and perishable foods (solid), as a refrigerant (liquid), in carbonized soft drinks (gaseous), and as a solvent for homogeneous reactions ( Supercritical state) and so on.

Carbon dioxide is a colorless and odorless gas at room temperature and pressure. It is soluble in most organic solvents such as water and hydrocarbons.

Carbon dioxide is one of the oxycarbons. It is an inorganic substance, non-flammable, and generally does not support combustion. It is non-toxic at low concentrations. It is also carbonic anhydrides, are acidic oxide, the acidic oxide having continuity, wherein the carbon valence of +4 valence, the valence of carbon at the highest, so the reduction of carbon dioxide has no oxidation, but oxidation Not strong.

1. The generality of acid oxide

Under certain conditions, carbon dioxide can react with basic oxides to form corresponding salts, such as:

When carbon dioxide is excessive, calcium bicarbonate is produced:

Due to the large solubility of calcium bicarbonate, when carbon dioxide is passed into the turbid lime water for a long time, it can be seen that the precipitate gradually disappears.

When carbon dioxide is excessive, sodium bicarbonate is produced:

Under ignition conditions, magnesium bars can burn in carbon dioxide. The corresponding chemical reaction equation is:

A series of reactions of carbon dioxide and hydrogen to form methanol, carbon monoxide, methane, etc. under the action of a catalyst. The chemical reaction equations of several reactions are:

Under acidic conditions, carbon dioxide can react with form reagents in anhydrous ether to form carboxylic acids. The corresponding chemical reaction equation is:

At 440 ° C (713.15K) and 800 atmospheres (about 808MPa), carbon dioxide can react with sodium metal to form diamond. The corresponding chemical reaction equation is:

7. The dark reaction of photosynthesis

The carbon dioxide gas produced during the high-temperature calcination of limestone (or dolomite) is washed with water, removed impurities, and compressed to obtain gaseous carbon dioxide:

Carbon dioxide is obtained by refining the carbon kiln gas and the gas obtained from methanol cracking.

Dioxocarbon, marble and dilute hydrochloric acid. Neither type of soda is used, and the speed is too fast to control.

Without sulfuric acid, magnesium salts are not as cheap as calcium salts. Nitric acid is easy to decompose when it is exposed to light.

Marble or limestone (the main ingredient is CaCO₃) and dilute hydrochloric acid.

Because the density of carbon dioxide is greater than that of air, it can dissolve in water and react with water, so the upward exhaust method is adopted.

The generated gas was passed into clear lime water, and the lime water became turbid, proving that the gas was carbon dioxide.

A burning wooden stick is placed at the mouth of the gas cylinder (cannot reach into the bottle). If the flame goes out, it is full.

① Hydrogen chloride (HCl) gas that may be volatilized during the reaction can be removed by a saturated sodium bicarbonate (NaHCO3) solution.

② If necessary, the water vapor in the generated gas can be removed by using a scrubbing bottle filled with concentrated sulfuric acid.

④ is marble (CaCO in the laboratory ₃ reaction) dilute hydrochloric acid and carbon dioxide from the system.

⑥ Dilute sulfuric acid cannot be used instead of hydrochloric acid. Reason: The reaction of dilute sulfuric acid with marble (CaCO ₃ ) will generate slightly dissolved calcium sulfate (CaSO ₄ ) on the surface of the marble, preventing the reaction from proceeding and making The response is very slow.

The carbon dioxide that originally occurred can be released. The gas produced by the decomposition needs to be introduced into an ice-cooled duct to condense the water vapor in the gas, and then the gas is successively introduced into a U-shaped tube containing calcium chloride and phosphorus pentoxide, respectively, to be dried. At 100 ° C, the decomposition pressure of sodium bicarbonate was 97.458kPa, and at 120 ° C, it was 166.652kPa.

High-purity carbon dioxide is mainly used in the electronics industry, medical research and clinical diagnosis, calibration gas for carbon dioxide lasers, testing instruments, and other special mixed gas preparations. It is also used as a regulator in the polymerization of polyethylene.

Liquid carbon dioxide is used as a refrigerant, low temperature tests for aircraft, missiles and electronic components, to improve oil well recovery, rubber polishing, and to control chemical reactions. It can also be used as a fire extinguishing agent.

Carbon dioxide in the supercritical state can be used as a solvent for dissolving non-polar, non-ionic and low molecular weight compounds, so it is widely used in homogeneous reactions.

Global warming: The increasing intensification of the greenhouse effect of the atmosphere has led to global warming and a series of global unpredictable global climate problems.

According to the International Climate Change Economics Report, if humans have maintained their current lifestyle, by 2100, the global average temperature will be 50% likely to rise by 4 ° C. If the global temperature rises by 4 ° C, glaciers on the north and south poles of the earth will melt, and sea levels will rise accordingly.

Over 40 island nations and the world ’s most populous coastal cities will face the danger of flooding. Tens of millions of people worldwide Life will face a crisis, and even produce a global ecological balance disorder, eventually leading to large-scale migration and conflicts around the world.

CCS technology: CCS technology, or Carbon Dioxide Capture and Storage (CCS) technology, is one of the most important technologies to address global climate change in the short term. It refers to the use of carbon capture technology to The carbon dioxide produced by the energy industry is separated, and then stored and transported to a place isolated from the atmosphere, such as the seafloor or underground.

In addition, some people think that under low oxygen conditions, carbon dioxide at a concentration of 8% to 10% can cause the death of humans and animals in a short time.

The high concentration of carbon dioxide itself has a stimulating and anesthetic effect and can cause hypoxia to suffocate the body.

Severe: Sudden dizziness cannot support and fell to the ground, belching, dyspnea, palpitations, unconsciousness, coma, bruising of the skin lips and nails, blood pressure drop, the pulse is too weak to reach, pupil dilated. The light reflection disappears, the whole body is soft, the glottis is enlarged, and the breathing and heartbeat are stopped successively to death. Some symptoms may include drowsiness and memory loss after the acute period.

① Quickly remove the poisoned person from the high-concentration carbon dioxide environment, go to fresh air, loosen the collar of the poisoned person, artificially assist breathing to make it inhale oxygen as soon as possible, and treat with hyperbaric oxygen if necessary, rescuers should wear effective breathing Protector.

② Injection of respiratory stimulants, antibiotics for secondary infections; decreased carbon dioxide binding capacity should be intravenously infused with sodium bicarbonate or sodium lactate, limb spasm can take larger doses of sedatives, long-term high fever and convulsions can be used as sedatives, others such as lungs Treatment of symptoms such as edema and cerebral edema.

① ventilate and detoxify, replace the workplace air, and make the carbon dioxide concentration in the air. Not more than 2%.

It is suitable for storage in a cool, ventilated warehouse for non-combustible gases, and is suitable for shipment in liquid or solid form. When storing and transporting carbon dioxide, the following points should be paid attention to:

① Keep away from fire and heat sources, and the storage temperature should not exceed 30 ℃.

③ The storage area should be equipped with emergency treatment equipment for leakage.

What is the formula of sugar? || Sugar Compounds