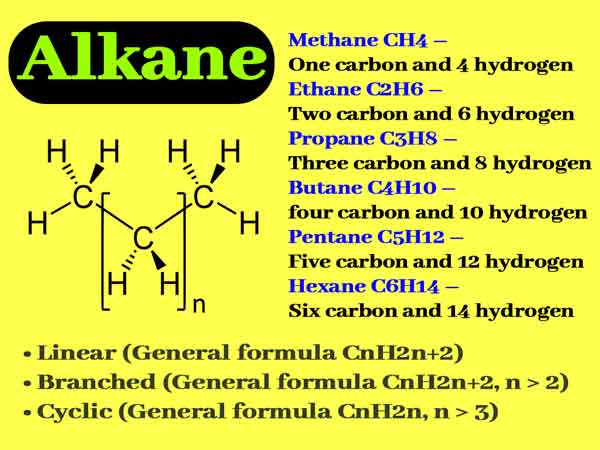 Any of a series of saturated aliphatic hydrocarbons (such as methane, ethane, etc.), such compounds are the main components of petroleum. Alkanes are saturated hydrocarbons, which are chain hydrocarbons with only carbon-carbon single bonds. Chemical properties of alkanes are well defined in NCERT chemistry topics.

They are the simplest type of organic compounds. In alkanes, the number of hydrogen atoms reaches a maximum. Each carbon atom in the molecule is sp3 hybrid. The simplest alkane is methane.

At the same time, the alkane is also a general term for saturated hydrides of many elements.

Categorize as hydride suffix and system

Mononuclear and their names

The “alkane” (-ane suffix) actually refers not only to the saturated hydrides of carbon but can refer to molecular hydrides in which all parent molecules do not contain unsaturated bonds. The mononuclear hydride is directly named after “element + alkane”.

The use of “Methane” is too common to be mistaken for a system name. In fact, “Carbine” is the systematic name for the substance. Although this name is rarely used, it is good to know its origin.

Some different hydrides of variable elements use the same alkane name, and non-standard bonding number hydrides are prefixed with “λ” to distinguish them. From the table above, we can know the names of generally saturated alkanes.

Beginning with the corresponding number, carbenes do not introduce the carbon element prefix, non-carbohydrates must add the nuclear element prefix.

In an alkane, each carbon atom is tetravalent, and there are only carbon-carbon single bonds and hydrocarbon single bonds. Using sp3 hybrid orbits, it forms a strong σ bond with the surrounding 4 carbon or hydrogen atoms.

They are called primary, secondary and tertiary hydrogen.

To minimize the repulsive force of the bond, four atoms connected to the same carbon form a tetrahedron. Methane is a standard regular tetrahedron with a bond angle of 109 ° 28 ′.

However, alkanes in nature do not exceed 50 carbons at most, and the most abundant alkanes are methane.

Because the carbon atoms in alkanes can be arranged randomly according to the law, the structure of alkanes can be written in countless kinds. Linear alkanes are the most basic structure, and theoretically, this chain can be extended indefinitely. Chemical Properties of Alkanes

It is possible to produce branched chains on the straight chain, which undoubtedly increases the number of alkanes.

Therefore, starting from a 4-carbon alkane, the molecular formula of the same alkane can represent multiple structures. This phenomenon is called isomerism. As the carbon number increases, the number of isomers will increase rapidly.

Alkanes may also undergo optical isomerism. When the four atomic groups connected by a carbon atom are different, this carbon is called chiral carbon, and this substance is optically active.

The remaining part of an alkane that loses a hydrogen atom is called an alkyl group , which is generally represented by R-. Therefore, alkanes can also be represented by the general formula RH.

Alkanes were first named using customary nomenclature. However, this nomenclature is difficult to use for alkanes with many carbon numbers and many isomers. So it was suggested nomenclature derived, all considered as derivatives of methane alkane, for example isobutane, called 2-methylpropane.

Due to the higher cost of alkane production (usually olefins are used for catalytic hydrogenation), alkane is not produced industrially but is directly extracted from petroleum. Since alkane is not easy to react, it is not used as a basic chemical raw material in the industry.

Since most of the alkane comes from petroleum, it must be subjected to a fractional distillation process to obtain a variety of alkane for different uses.

Bicyclo [1.1.0] butane is the only alkane with the chemical formula C4H6.

Alkane isomers are mostly chain isomers (isomers due to different branch chains). Alkanes with more than 3 carbon atoms can be arranged in a variety of ways to form isomers. The number of alkane isomers increases as the carbon number increases.

Main uses: Extraction solvents for vegetable oils, fish oils, resins, etc., for the manufacture of polyolefin elastomers and pharmaceutical media, and for the production of solvents such as adhesives for tapes, varnishes and tires.

Main use: It can be used as diluent or extender for foreign dry paint adhesive and solvent for organic industry. Multi-Purpose Mineral Spirit is used for paint thinners, ink solvents, glue solvents and general industrial solvents, in addition to alcohol denaturants. Appearance: transparent liquid, no suspended matter

Main use: Excellent dissolving power, it is a dry cleaning solvent for textiles, but it has a slight taste. It has excellent solvent characteristics and is widely used in the manufacture of printing and dyeing, pesticides and herbicides. Appearance: colorless transparent liquid.

The current nomenclature uses the IUPAC nomenclature. The systematic naming rules for alkanes are as follows:

When there are multiple substituents, use the smallest and longest carbon chain as the main chain, and list all substituents in the order of methyl, ethyl, and propyl.

Structural formula of isooctane ( 2,2,4-trimethylpentane ). Isooctane is a standard for gasoline knock resistance, with an octane number of 100. For some simple or commonly used alkanes, common names are often used. For example, it is customary to prefix the name of a linear alkane with the word “n”, but the word is not included in the system name.

Alkanes are very stable because the CH and CC double bonds are relatively stable and difficult to break. Apart from the following three reactions, alkanes can hardly carry out other reactions.

All alkanes can be burned, and the reaction exothermic. Alkanes complete combustion CO.’S2 and H2O. If the amount of O2 is insufficient, toxic gases such as carbon monoxide (CO) and even carbon black (C) will be generated.

Take methane as an example:

When the supply of O2 is insufficient, the reaction is as follows:

Large-molecular-weight alkanes often cannot be completely burned. When they are burned, black smoke is generated, that is, carbon black. The same is true of the black smoke in the car’s exhaust.

Because the structure of alkanes is too strong, ordinary organic reactions cannot proceed. Halogenation of alkanes is a free radical substitution reaction, and light energy is required to generate free radicals at the beginning of the reaction.

The following are the steps in which methane is halogenated. This highly exothermic reaction can cause an explosion.

For example, hexadecane (C16H34) can be cracked to obtain octane and octene (C8H18). The probability of breaking is different due to the different environments of each bond. The following is an example of the cracking of butane:

In the cracking reaction, different conditions can trigger different mechanisms, but the reaction process is similar. Carbon radicals are generated during the thermal decomposition process, and carbon positive ions and hydrogen negative ions are generated during the catalytic cracking process. These extremely unstable intermediates undergo steps such as rearrangement, bond cleavage, and hydrogen transfer to form stable small molecule hydrocarbons.

The role of alkanes is mainly to make fuel. Natural gas and biogas (mainly composed of methane) are widely used clean energy sources. Various fractions from petroleum fractionation are suitable for various engines:

Fractions above C20 are heavy oils, and then reduced pressure distillation can obtain substances such as lubricating oil and asphalt.

In addition, the reaction of paraffin to crack olefins has become an important method for the production of ethylene.

At normal temperature and pressure (1 atmosphere), (methane to butane) is gaseous, between 5 -17 (pentane to heptane) is liquid, and more than 18 carbons (octadecane) are solid.