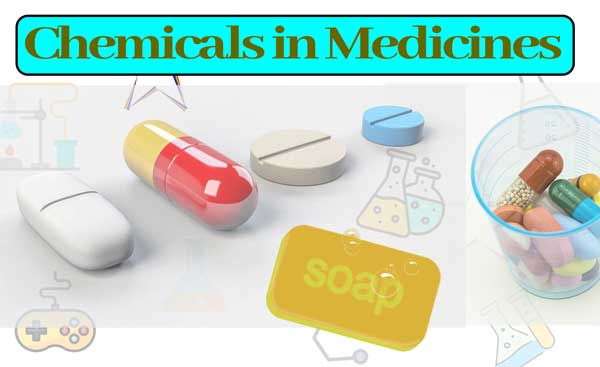 Chemicals in Medicine: Drugs compete with the natural substrate for their attachment to the active sites of enzymes. Such drugs are called competitive inhibitors. Some drugs do not bind to the enzyme’s active site. These bind to a different site of enzyme which is called allosteric site.

This binding of inhibitor at the allosteric sites changes the shape of the active site in such a way that the substrate cannot recognize it. If the bond formed between an enzyme and an inhibitor is a strong covalent bond and cannot be broken easily, then the enzyme is blocked permanently. The body then degrades the enzyme-inhibitor complex and synthesize the new enzyme.

Antibiotics are chemical substances (prepared wholly or partially by chemical synthesis) which in low concentration either kill or inhibit the growth of microorganisms by intervening in their metabolic processes. E.g.,

Drugs: These are the chemicals of low molecular masses (100-500 u) which interact with macromolecular targets and produce a biological response.

Medicines: These are the drugs that are therapeutic and used for diagnosis, prevention, and treatment of diseases.

Use of chemicals for therapeutic effect is called chemotherapy.

Classification of drugs: Drugs are classified on the basis of

Receptors as a drug target: Proteins that transmit the communication to the different parts of the body are called receptors. Receptor proteins are embedded in the cell membrane and the receptor changes its shape to accommodate a chemical messenger which brings about transfer of message into the cell.

– Drugs bind to their receptor sites and inhibit its natural function (antagonists). These are useful when blocking of message is required.

– Some drugs mimic the natural messenger by switching on the receptor (agonists). These are useful when there is a lack of natural chemical messenger.

The therapeutic action of different classes of drugs:

Antacids: These are chemicals that neutralize excess acid in the gastric juices and give relief from acid indigestion, acidity, heartburns, and gastric ulcers, e.g., magnesium hydroxide, calcium carbonate, etc.

These are chemical substances that reduce pain. They are classified as:

— Non-narcotic analgesics: Aspirin and paracetamol belong to this class of drugs. They are effective in relieving skeletal pain such as that due to arthritis. They have many other effects such as reducing fever and preventing platelet coagulation. Aspirin finds use in the prevention of heart attacks because of its anti-blood clotting action.

— Narcotic analgesics: Morphine and many of its homologs, when administered in medicinal doses, relieve pain and produce sleep. In poisonous doses, they cause convulsions and ultimately death. These are mainly used for the relief of postoperative pain, cardiac pains and pains of terminal cancer.

These are chemical substances used to cure infections due to microorganisms, e.g., sulphadiazine, sulphadoxine, etc. Antibiotics, antiseptics and disinfectants are antimicrobial drugs.

– Antibiotics: These are chemical substances produced wholly or partly by chemical synthesis which in low concentration inhibit the growth or destroy microorganisms by intervening in their metabolic processes.

The antibiotics may be either bacteriocidal (kill the organisms in the body) e.g., penicillin, ofloxacin, etc., or bacteriostatic (inhibit the growth of organisms), e.g., erythromycin, chloramphenicol, etc.

Antibiotics that kill or inhibit a wide range of Gram-positive and Gramnegative bacteria are said to be broad-spectrum antibiotics, e.g., tetracycline, chloromycetin and chloramphenicol.

Those effective mainly against Grampositive or Gram-negative bacteria are narrow-spectrum antibiotics, e.g., penicillin-G.

— Antiseptics: These are chemicals which either kill or prevent the growth of microorganisms and are applied to the living tissues such as wounds, cuts, ulcers and diseased skin surfaces.

Bithionol is added to soaps.

Tincture of iodine, i.e., 2-3% solution in the alcohol-water mixture is applied on wounds.

– Disinfectants: These are also used to kill microorganisms, but they are applied to inanimate objects.

Some substances can act as antiseptic as well as a disinfectant by varying the concentration.

0.2% phenol is an antiseptic, whereas its 1% solution is disinfectant.

0.2-0.4 ppm chlorine in aqueous solution acts as a disinfectant.

Antifertility drugs: Chemical substances used to prevent conception or fertilization are called antifertility drugs. These are essentially a mixture or estrogen and progesterone derivatives which are more potent than the natural hormones, e.g., mifepristone, ormeloxifene, etc.

Preservatives: These are the chemical substances that are added to the food materials to prevent their spoilage and to retain their nutritive value for long periods. These preservatives prevent the rancidity of food and inhibit the growth or kill the microorganisms.

The preservation of food by adding a sufficient amount of salt to it is called salting. Salt prevents the water from being available for microbial growth.

The microbial growth in food materials can also be prevented by adding certain chemical substances. The most common preservative used is sodium benzoate (C6H5COONa). It is metabolized by conversion to hippuric acid, C6H5CONHCH2COOH which ultimately is excreted through urine.

Certain food preservatives such as BHA and BHT are used for edible oils, also act as antioxidants.

Artificial sweetening agents: These are chemical compounds which give sweetening effect to the food and enhance its odour and flavor.

Antioxidants: These are the chemical substances that prevent oxidation and subsequent spoilage of the food. These act as sacrificial materials, i.e., they are more reactive towards oxygen than the materials they are protecting. They also reduce the rate of involvement of free radicals in the ageing process.

These are sodium or potassium salts of long-chain fatty acids, e.g., stearic, oleic and palmitic acids. Soaps containing sodium salts are prepared by heating glyceryl ester of fatty acid with aqueous NaOH solution and the reaction is known as saponification.

These are the materials that are used for cleaning purposes. They are also called soapless soaps.

These are used as a fabric softener and hair conditioner.

Advantages of synthetic detergents over soaps:

They can be used in hard water, in acidic medium while soaps get precipitated.

They are more soluble in water and thus, form lather more easily.

They are stronger cleansing agents than soaps as they decrease the surface tension to a greater extent.