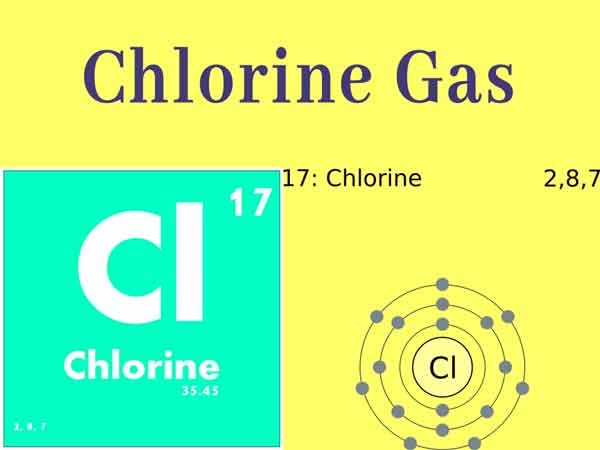 Chlorine is a non-metallic element and belongs to one of the halogens. Chlorine gas is yellow-green gas at normal temperature and pressure, and its chemical properties are very lively and toxic.

It is widely distributed in nature in the form of chemical forms and is also important for the physiological activities of the human body.

At that time, the great chemist Lavoisier believed that oxygen is the origin of acidity, and all acids contain oxygen.

Scheler and many chemists are convinced that Lavaisier’s view is that this yellow-green gas is a compound composed of oxygen and another unknown group, so Scheler calls it “oxidized hydrochloric acid”.

But the British chemist David holds a different view. He tried every means and could not take the oxygen out of the oxidized hydrochloric acid.

The free state of chlorine gas in nature exists in the atmosphere and is one of the main elements that destroy the ozone layer. Chlorine is decomposed by ultraviolet light into two chlorine atoms (free radicals). Most are usually in the form of chloride (Cl-), the most common being sodium chloride (salt, NaCl).

Operators are advised to wear an air respirator, wear a mask-type tape anti-drug, and wear rubber gloves. Keep away from fire, heat, and smoking in the workplace.

Keep away from flammable and combustible materials. Prevent gas from leaking into the workplace air. Avoid contact with alcohol.

Lightly load and unload during handling to prevent damage to cylinders and accessories. Equipped with the corresponding variety and quantity of fire-fighting equipment and leakage emergency treatment equipment.

Store in a cool, ventilated warehouse. Keep away from fire and heat. The temperature of the reservoir does not exceed 30°C, and the relative humidity does not exceed 80%. It should be stored separately from combustibles (combustibles), alcohols, and food chemicals.

Avoid mixing. The storage area should be equipped with leakage emergency treatment equipment. The “five pairs” management system for extremely toxic substances should be strictly implemented.

Chlorine has 26 isotopes, of which only 35Cl and 37Cl are stable, and the remaining isotopes are radioactive.

Therefore, chlorine gas has a strong oxidizing property and can occur with most metals and nonmetals.

Chlorine can also be added or substituted with many organic substances and is widely used in life.

Chlorine is highly toxic and has been used as a military gas.

3In the industry, use electrolytic cold brine to stir vigorously to prepare NaClO

1 is a weak acid, but it is a strong oxidant and has bleaching properties.

Chlorochloric acid is the only halous acid and is very unstable.

1 A very unstable compound, but chlorite is more stable.

2 Electrolyze the hot sodium chloride aqueous solution and stir it:

Both chloric acid and chlorate are strong oxidants

3KClO3 is heated by heat

2 When the brine is electrolyzed, the chlorine produced by the anode is oxidized:

1 chlorine is the most stable oxo acid, not easy to decompose

2 very strong acid (the strongest acid in the high school range, stronger than 100% sulfuric acid, but weaker than super acid such as fluoro antimonic acid )

Chlorine is mainly used in the chemical industry, especially in the organic synthesis industry, to produce plastics, synthetic rubbers, dyes, and other chemicals or intermediates, as well as bleaches, disinfectants, synthetic drugs, and the like.

A lot of chlorine is also needed to extract rare metals.

Chlorine is one of the essential macroelements in the body and is essential for maintaining the balance of body fluids and electrolytes.

It is also an essential component of gastric juice. It is often found in the form of chlorides in nature, the most common form being table salt.

Chlorine has an average body content of 1.17g/kg, a total amount of about 82–100g, accounting for 0.15% of body weight, and is widely distributed throughout the body.

Dietary chlorine is almost exclusively derived from sodium chloride, and only a small amount is derived from potassium chloride. Therefore, salt and processed food soy sauce, cured meat or smoked food, pickles and salty foods are rich in chloride. In general, the content of chlorine in natural foods varies greatly; almost all natural water contains chlorine.

Used as a chemical weapon (suffocating poison) during World War I

Chlorine gas is a serious hazard to the environment and can cause pollution to water bodies.

Therefore, when contacting chlorine gas, it is necessary to pay attention to the strict protection of the whole body. It is strictly forbidden to directly smell and contact with chlorine gas, and the chlorine-containing exhaust gas should not be directly discharged into the atmosphere.

What Helium is Used for || Helium Isotopes || How is Helium Made

DDT full Form || What was DDT used for? || Is DDT harmful to humans?