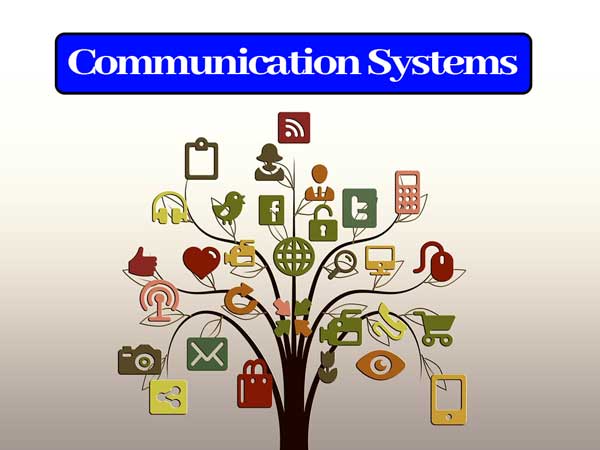 Communication Systems: The process of transmission and reception of information over extended distances.

Elements of a communication system are the set up used in the transmission and reception of information from one place to another.

There are two basic modes of communication

– Broadcast: In the broadcast mode, there are a large number of receivers corresponding to a single transmitter. e.g. radio and television.

The terminology used in the electronic communication system

Transducer: Any device that converts one form of energy into another is known as a transducer.

Signal: Information converted in electrical form and suitable for transmission is known as a signal. Signals can be either analog or digital.

Noise: It refers to the unwanted signals that tend to disturb the transmission and processing of message signals in a communication system.

Transmitter: A transmitter processes the incoming message signal so as to make it suitable for transmission through a channel and subsequent reception.

Receiver: A receiver extracts the desired message signals from the received signals at the channel output.

Attenuation: The loss of strength of a signal while propagating through a medium is known as attenuation.

Amplification: It is the process of increasing the strength of a signal using some suitable electronic circuit.

Range: It is the largest distance between a source and a destination up to which the signal is received with sufficient strength.

Bandwidth: It refers to the frequency range over which equipment operates or the portion of the spectrum occupied by the signal.

Modulation: It is the phenomenon of superimposing the low-frequency message signal (called the modulating signal) on a high-frequency wave (called the carrier wave).

Repeater: A repeater is the combination of a receiver and a transmitter. It increases the strength of the signal to increase the range of communication.

The audible range of frequencies is from 20 Hz to 20 kHz. As the frequencies produced by musical instruments are high, therefore, approximate bandwidth for music is 20 kHz.

For transmission of pictures, video signals require a bandwidth of 4.2 MHz.

The bandwidth of transmission medium

Coaxial cable is a widely used wire medium. It offers a bandwidth of approximately 750 MHz. These cables are normally operated below 18 GHz.

Communication through free space using radio waves takes place over a very wide range of frequencies ranging from a few hundreds of kHz to a few GHz.

Optical fiber communication is used in the frequency range of 1 THz to 1000 THz (microwaves to ultraviolet). An optical fiber can offer a transmission bandwidth in excess of 100 GHz.

The gaseous envelope which surrounds the earth is known as earth’s atmosphere.

The density of the atmospheric air goes on decreasing as we go up.

It extends from 65 km to 400 km. In this region, the temperature rises to some extent with height, hence it is called the thermosphere. The ionosphere which is composed of ionized matter

(i.e., electrons and positive ions) plays an important role in space communication. The ionosphere is subdivided into four main layers as D, E, F1, and F2 as shown in the table.

Propagation of electromagnetic waves in the atmosphere

The radio waves which progress along the surface of the earth are known as ground waves or surface waves. These waves are vertically polarised in order to prevent short-circuiting of the electric component. These waves induce currents in the ground as they propagate due to which some energy is lost by absorption.

The sky waves are the radio waves of frequency between 2 MHz to 30 MHz.

These radio waves can propagate through the atmosphere and are reflected back by the ionosphere of the earth’s atmosphere.

With the help of skywave propagation, communication over a very long distance around the globe is possible.

Modulation and Its Necessity

Low frequencies cannot be transmitted to long distances as such. Therefore, they are superimposed on a high-frequency carrier signal by a process known as modulation.

– Size of the antenna

– Effective power radiated by an antenna

– Mixing up of baseband signals from different transmitters

In modulation, some characteristic of the carrier signal like amplitude, frequency or phase varies in accordance with the modulating or message signal giving rise to following three types of modulation:

The Internet: It is a system with billions of users worldwide. Its applications include:

The modem is a modulator and a demodulator.

FAX or facsimile means the exact reproduction of the document like a picture, letter, map, etc. at a distant place.

The concept of mobile telephony was developed first in the 1970’s and it was fully implemented in the following decade. The central concept of this system is to divide the service area into a suitable number of cells centered on an office called MTSO (Mobile Telephone Switching Office). Mobile telephones operate typically in the UHF range of frequencies. (about 800-950 MHz).

Introduction of Cannizzaro’s reaction || What is the Cannizzaro reaction used for?