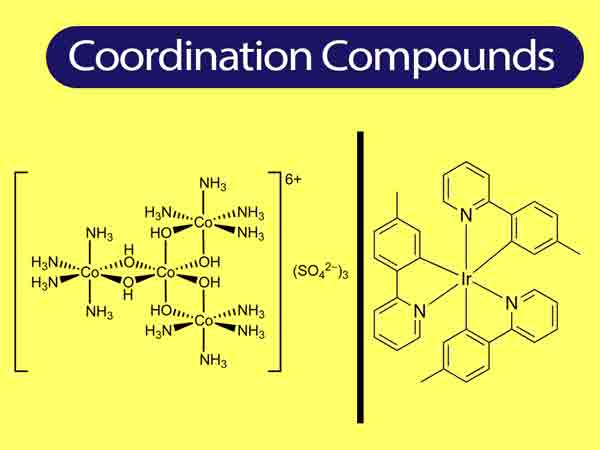 Coordination compounds are a class of compounds with a characteristic chemical structure. The central atom (or ion, collectively referred to as the central atom) and the molecules or ions surrounding it (called ligands/ligands) are completely or partially bound by coordination bonds form. Coordination Compounds

Complexes are a larger subclass of compounds and are widely used in daily life, industrial production, and life sciences. They have developed particularly rapidly in recent years. It is not only related to inorganic compounds and organometallic compounds, but also has a lot of overlaps with atomic cluster chemistry, coordination catalysis, and molecular biology.

Coordination compounds generally refer to the transition metal atoms or ions (part of the valence electron layer d orbitals and s, p orbitals are empty orbitals) and molecules containing lone pair electrons (such as CO, NH3, H2O) or ions ( such as CI–, the CN–, NO2-, etc.) formed by a coordination bond compound binding.

The term of Coordination Bond

Coordination bond, covalent bond: A chemical bond existing in a coordination compound. Two electrons provided by one atom to form a bond become an electron donor, and the other bond-forming atom becomes an electron acceptor. See acid-base reaction and Lewis acid-base theory.

Formerly known as “complex”. The coordination compound is composed of a central atom, a ligand and the outside world. For example, the molecular formula of tetraamminecopper (II) sulfate is

The ligand and the central atom constitute the coordination ontology and are listed in square brackets. The complex undergoes partial dissociation in solution but still tends to retain its body. All metals in the periodic table can be used as central atoms, and transition metals (see transition elements ) are more likely to form complexes.

The charge of the ligand ion is the sum of the charge of the metal ion and the ligand, for example, Fe 2+ and 6CN – coordinate to produce [Fe (CN) 6 ] 4- coordinate anion, Cu 2+ and 4NH 3 produce [Cu (NH 3 ) 4 ] 2+ complex cations, each of which forms a complex with an oppositely charged cation or anion.

The chemical bond theory of coordination compounds mainly studies the nature of the binding force between the central atom and the ligand to explain the physical and chemical properties of the complex, such as magnetism, stability, reactivity, coordination number and geometric configuration. The theory of complexes starts with electrostatic theory.

Then Sidwick and Pauling proposed the covalent covalent model, that is, the application of the valence bond theory in complexes, has ruled this field for more than two decades, which can better explain the coordination number, geometric configuration, and magnetic properties. Wait for some properties, but cannot help the color and spectrum of the complex.

Valence theory suggests that the lone pair of electrons provided by the ligand has entered the empty atomic orbital of the central ion, so that the ligand and the central ion share the two electrons. The formation of coordination bonds has gone through three processes: (excitation), hybridization, and bonding.

Crystal field theory treats ligands as point charges and treats coordination bonds as ionic bonds, which can be seen as an extension of electrostatic theory.

Moreover, it takes the effect of ligands on d orbits of different spatial orientations as entry points in different geometric configurations, and concludes that d orbitals of different orientations will split energy levels and establish the concepts of splitting energy and crystal field stabilization energy.

To infer the electronic configuration and stability of the complex. The crystal field theory can well explain the complex color, thermodynamic properties, and complex distortion, but it cannot reasonably explain the spectrochemical sequence of the ligand, nor can it be applied well to special high / low-cost complexes and sandwich complexes.

The coordination field theory combines molecular orbital theory with crystal field theory. It is more rigorous in theory, but quantitative calculation is very difficult. In the calculation process, approximate processing has to be introduced, so only approximate results can be obtained.

Ligand coordination compound may be other ligands substituted called ligand exchange reactions, the general reaction mechanism is a nucleophilic substitution reaction . Taking octahedral complexes as an example, the general formula for such reactions is:

In the formula, X is a substituted ligand, which is usually called a leaving group; Y is a substituted group, which is usually called an entering group. The rates of such ligand exchange reactions vary widely, some reactions can be completed within 10 seconds, while others can take months. For the difference in activity, there is an artificial rule that the complex with a half-life greater than one minute at a concentration of about 0.1 M and a temperature of 25 ° C belongs to the so-called “inert” complex, otherwise it is called an active complex.

Both the valence bond theory and the coordination field theory explain the difference in the rate of such reactions, and generally the following rules exist:

In addition, the reaction rate also depends on the type and arrangement of the solvent and ligand.

Complexes that are inert to ligand exchange reactions, have no bridging ligands, or have very low electron transfer activation energies, their mechanism is dominated by the outer layer mechanism.

The ligands that are reactive to the ligand exchange mainly have a bridge mechanism. The energy barrier to be overcome by the bridge mechanism is much lower than that of the outer reaction mechanism, because the bridged ligand transfers electrons and reduces the electron penetration of the outer layer and water Energy.

There are two more special types of redox reactions:

② The name of the ligand and the central atom are connected by the word “he”.

③ If the central atom is an ion, add a Roman numeral with parentheses after the name of the metal ion to indicate the valence of the ion.

④ The coordination number is in Chinese before the ligand name.

The names of different ligands are separated by a dot. According to the above rules, [Cu(NH3)4]SO4 is called tetra ammonium copper (II) sulfate, [Pt(NH3)2Cl2] is called dichloro · diamine platinum (Ⅱ), and K[Pt(C2H4)Cl3] is called trichloro· ( ethylene ) platinum (II) acid potassium. In fact, the complex is also commonly used by common names, such as K4[Fe(CN)6] is called yellow blood salt, K3[Fe(CN)6] is called red blood salt, and Fe4[Fe(CN)63 called Prussian blue.

When naming coordination compounds, the Chinese IUPAC nomenclature is generally followed. The naming rules are:

I. Naming of complexes (for high school students)

The complexes dissolve in water and are easily ionized as internal ligand ions and external ions, while internal ligands and central atoms are usually not ionizable.

Detailed instructions (for academic use)

The word “chemical” or “acid” is added between the anion and the cation first, followed by the anion as an acid radical.

(2) In the coordination unit

② The number of the ligands is represented by one, two, or three in front of the ligand. “One” can be omitted. If it is easy to misunderstand, the ligand needs to be bracketed.

Each of the following provisions is based on the previous one

③ In the same kind of ligands, according to the order of the element symbols of the coordination atoms in the English alphabet,

④ The coordination atoms are the same, and the number of atoms in the ligand is the first.

Classified by ligands, there are:

③ Ammonia complex. Complexes of metal ions and ammonia molecules, such as [Cu (NH 3)4]SO4.

⑤ Metal carbonyl compound. A complex formed by a metal and a carbonyl group (CO). Such as [Ni (CO)4].

Classified by central atom, there are:

①Single core complex. There is only one central atom, such as K 2 [CoCl4].

Classification by key type can be:

① Classical complexes. A sigma coordination bond is formed between the metal and the organic group, such as [Al2(CH3)6].

② Cluster-like complexes. It contains at least two metals as the central atom, which also contains metal-metal bonds, such as [W6(Cl12)Cl6].

④ Sandwich complex. The central atom is a metal and a ligand is an organic group. The metal atom is sandwiched between two parallel carbocyclic systems, such as ferrocene [Fe(C5H5)2].

⑤ Acupoint complex. The ligands belong to macrocyclic polydentate organic compounds, such as N (CH2OCH2CH2)3 N having a bicyclic structure, and they form a cavity complex with alkali metals and alkaline earth metals.

① Inorganic complex. Both the central atom and the ligand are inorganic.

② Organometallic complexes. A complex formed between a metal and an organic ligand.

③ Biological inorganic complex. Complexes formed by biological ligands and metals, such as metalloenzymes, chlorophyll, and vitamin B12.

Chemical branches that cover the coordination chemistry, such as:

Generally, the stability of a coordination compound mainly refers to the thermal stability and whether the complex can easily ionize its components (central atom and ligand) in solution. The coordination body can weakly dissociate a small number of central atoms (ions) and ligands in the solution. For example, [Cu (NH3)4]2+ can dissociate into a small amount of Cu2+ and NH3.

The larger K is, the more stable the complex is, that is, the degree of dissociation in the aqueous solution is small.

The transition metal has a high nuclear charge, a small radius, and empty d orbitals and free d electrons. They easily accept the electron pairs of the ligands, and it is easy to feedback the d electrons to the ligands. Therefore, they can all form stable complexes. Alkali metals and alkaline earth metals are just the opposite of transition metals. They have low polarizability, have an inert gas structure, have poor ability to form complexes, and their complexes have poor stability.

The stability of the complex conforms to the theory of soft-hard affinity, that is, soft-soft, hard-hard.

There are many, the most common is octahedron and tetrahedron.

Regarding the coordination atoms around the central atom as points and connecting the points with lines, a coordination polyhedron is obtained. The relationship between coordination number and complex configuration is listed in the following table:

The above is just the ideal situation of the complex configuration. In practice, the structure of the complex is often distorted, which may be due to steric effects, electronic effects (see Ginger-Taylor effect), or the type of ligand.

Isomerism is one of the important properties of complexes. It not only affects the physical and chemical properties of the complex, but also has a close relationship with its stability, reactivity and biological activity. Important complex isomerization phenomena include stereoisomerism and structural isomerism.

From the viewpoint of spatial relationships, cis- ( CIS -) refer to the same ligand in the ortho, trans- ( Trans -) refer to the same ligand in the para position. Octahedral [MA . 3 B. 3 ] of the two isomers, a surface of formula ( FAC -) or cis – cis pointing tip cam face A 3 and B each accounted for 3 octahedron by formula ( Mer – ) or cis-trans refers 3 a and 3 B octahedral circumscribed spheres of the meridian in parallel on. See below:

The planar square complex [M(AB)2] of the asymmetric bidentate ligand may also have geometric isomerism, and its structure is similar to the above cisplatin, as shown in the figure below:

Multinuclear complexes also have geometric isomerism. For example, the cis and trans isomers of the binuclear complex [Pt2(PPr3)2(SEt)2Cl2] of Pt (II) have been prepared, and their benzene solutions are stable at room temperature. However, the transform can be completely converted to the cis form by adding a trace amount of tripropylphosphine as a catalyst to a hot or cold benzene solution.

The simplest optical isomer of the complex is a tetrahedral type. The central atom is connected to four different groups, and the molecule cannot coincide with the mirror image. For example [Be (C6H5COCHCOCH3)2]. For octahedral complexes, optical isomerization mainly occurs in the following cases:

Structural isomers are isomers with the same chemical formula but different atomic order, which can be divided into the following categories:

Lithium Element || How Lithium-Ion Batteries Work || Use of Lithium