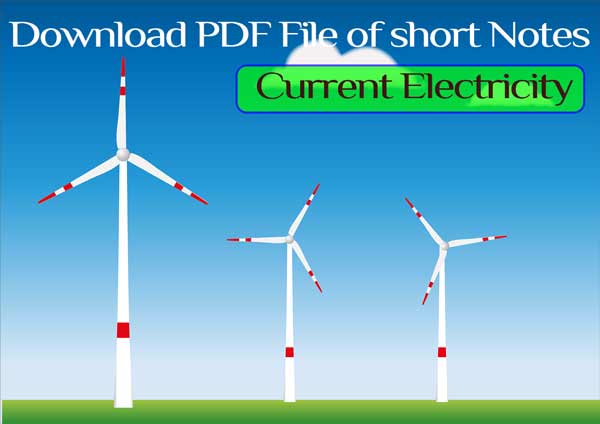 Current Electricity: It is defined as the rate of flow of electric charge through a cross-section of the conductor.

If the current is steady i.e. it does not change with time, then where q is the charge that flows across the cross-sectional area in time t.

The current is a scalar quantity. It is not a vector quantity as it does not follow the laws of vector addition.

Current in different situations is due to the motion of different charge carriers.

– Current in conductors and vacuum tubes is due to the motion of electrons.

– In electrolytes due to the motion of both positive and negative ions.

– In semiconductors due to the motion of electrons and holes.

– In the discharge tube (containing atomic gases) due to the motion of positive ions and negative electrons.

Current density: Current density at a point inside the conductor is defined as the amount of current flowing per unit area around that point of the conductor, provided the area is held in a direction normal to the current. It is denoted by symbol j.

Ohm’s law: It states that the current (I) flowing through a conductor is directly proportional to the potential difference (V) across the ends of the conductor, provided physical conditions of the conductor such as temperature, mechanical strain, etc. are kept constant.

Where the constant of proportionality R is called resistance of the conductor.

The graph between the potential difference (V) and current (I) through a metallic conductor is a straight line passing through the origin as shown in the figure.

The reciprocal of slope of the line gives resistance.

e.g. metals. For ohmic conductors, the graph between current and potential difference is a straight line passing through the origin.

Electrochemical cell: It is a device which, converts chemical energy into electrical energy, maintains the flow of charge in a circuit.

Electromotive force (emf) of a cell

– It is defined as the potential difference between the two terminals of a cell in an open circuit i.e. when no current flows through the cell. It is denoted by symbol ℰ.

– The SI unit of emf is joule/coulomb or volt and its dimensional formula is [ML2T–3A–1].

– The emf of a cell depends upon the nature of electrodes, nature and the concentration of electrolyte used in the cell and its temperature.

The internal resistance of a cell

– It is defined as the resistance offered by the electrolyte and electrodes of a cell when the current flows through it.

– The internal resistance of a cell depends upon the following factors:

Distance between the electrodes

The nature of the electrolyte

The nature of electrodes

How to make Hydrogen peroxide?

Oxygen Atom and Oxygen Isotopes || Why Oxygen is Important and Uses