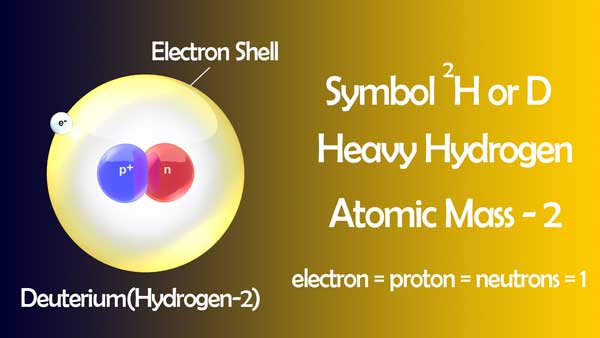 Three isotopes of hydrogen are known. Their atomic number is 1 and their mass numbers are 1, 2, and 3 respectively. These institutes are called Hydrogen-1(protium), Hydrogen-2(deuterium) and Hydrogen-3(tritium).

Their symbols are 1H1, 1H2, 1H3 respectively. In chemical equations, they represent H, D, and T respectively. Each of them has one electron and one proton and the number of neutrons is 0, 1, 2 respectively.

Like hydrogen, deuterium has two atoms in one Atom. Hence, it is a double standard gas. Harold Urey was discovered in 1931. for the discovery of Deuterium, Harold Urey received the Nobel Prize in 1934.

The oxide (D2O) of Deuterium is also called heavy water. The main method of obtaining deuterium to heavy water is the following:

The above reactions are used both for making small amounts of duet gas in the laboratory and for its industrial manufacture.

According to Graham’s law of diffusion, the diffusion speed of a gas is inversely the square root of its atomic mass.

In this method, liquid hydrogen is effectively distilled in a vacuum. Light hydrogen (boiling point = 20.28 K) evaporates first and the Deuterium (boiling point = 23.59 K) remains in the distillation flask. This method was first used by Harold Urey in 1931.

Duetro-Halides is formed by acting with halogens in appropriate positions.

In suitable conditions, it substitutes hydrogen from compounds of hydrogen by deuterium. Such reactions are called Exchange Reactions.

It is used as a projectile in nuclear reactions and as a reactor in nuclear fusion processes.

It is used in making compounds of deuterium.

It is used as a tracer element in the study of the processes of various reactions and processes.

Used in making heavy water which is used for moderator in nuclear fission processes.

What is nitric acid used for?|| Nitric Acid Preparation

What is the formula of Chlorobenzene? Preparation, Properties and uses