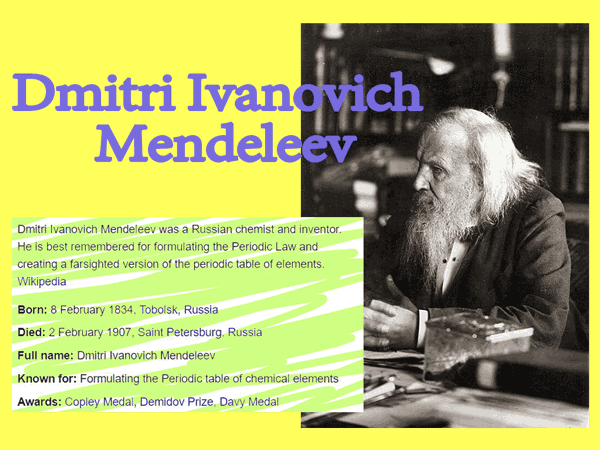 According to the atomic weight, he produced the world’s first periodic table of elements and based on it Foreseen some undiscovered elements.

On February 2, 1907, the world-renowned Russian chemist died of myocardial infarction. That day was only five days before his 73rd birthday. His masterpiece, Principles of Chemistry, which was born along with the law of the periodicity of the elements, was recognized as a standard work by the international chemical community in the late nineteenth and early twentieth centuries.

Read More about the Periodic Table of Elements

Dmitri Ivanovich Mendeleev (Дмитрий Иванович Менделеев) was born on February 7, 1834 in Tobolsk, Siberia, and died in Petersburg on February 2, 1907.

He entered Petersburg National Chiao Tung University in 1848 and entered the Petersburg Normal College in 1850 to study chemistry. He obtained a teaching qualification in 1855 and received a gold medal. After graduation, he became a teacher at Odessa Middle School.

In 1860 he participated in the International Congress of Chemists in Karlsruhe.

In 1861 he returned to Petersburg for scientific writing. In 1863, he was a professor at the Institute of Technology. In 1864, Mendeleev was a professor of chemistry at the Technical College. He received a doctorate in chemistry in 1865.

In 1866, he was a professor of general chemistry at Petersburg University, and in 1867 he was director of the chemistry department.

Since 1893, he has been the director of the Bureau of Weights and Measures. Elected as a foreign member of the Royal Society in 1890.

On February 2, 1907, the famous Russian chemist Mendeleev died at the age of 73.

To commemorate the great scientist, in 1955, by the United States of Qiaosuo (A.Gniorso), Harvey (BGHarvey), Chopin (GRChoppin), who, in the accelerator with helium nuclei bombardment einsteinium (253Es). Einsteinium with helium nuclei combines to emit a neutron, to obtain a new element. Then the Mendeleev (Mendeleyev) was named mendelevium.

2. In addition to discovering the periodic law of elements, Mendeleev has also studied the laws of gas, meteorology, petroleum industry, agricultural chemistry, smokeless powder, and weights and measures. Due to his hard work, he has made various degrees in these areas Grades.

Mendeleev’s greatest contribution to the development of chemistry was the discovery of the periodic law of chemical elements. On the basis of his work on the critically predecessors, the fact that a large number of experiments were revised, analysis and generalization, summed up such a law: elements (it forms and by the elemental nature of the compound) with the atomic weight (according to current The national standard is called the relative atomic mass) and it changes periodically, which is the law of elemental periodicity.

He compiled the first periodic table according to the law of element periodicity and listed all 63 elements that have been found in the table, thereby completing the task of systematizing the elements. He also leave vacancies in the table, predicted a similar boron, aluminum, silicon unknown elements (Mendeleev call class B, class aluminum and silicon-based, i.e. later discovered scandium, gallium, germanium) in nature, and It is pointed out that the values ​​of the atomic weights of some elements measured at the time are wrong.

And he does not mechanically arrange the atomic weight in the order of the periodic table. Years later, his predictions were confirmed. The success of Mendeleev’s work caused a shock in the scientific community.

Climbing the peak of science is a difficult and winding road. Mendeleev was also suffering on this road. When he was an associate professor of chemistry, he was responsible for teaching “Basics of Chemistry”.

How many elements should be pointed out in theoretical chemistry? What are the similarities and differences between the elements and what are the internal connections? How should new elements be discovered? These issues were at the exploratory stage in the chemical community at that time.

For more than 50 years, chemists from various countries have worked hard to open this secret door. Although some chemists such as Debelena and Newlands objectively described some connections between elements at a certain depth and different angles, because they did not summarize all the elements as a whole, they did not find the correct classification principle of the elements. The young scholar Mendeleev also rushed into the field without fear and began difficult exploration work.

He researched day and night, exploring the chemical properties of the elements and their general atomic properties, and then recorded each element on a small paper card. He attempts to capture the commonality of the elements in all the complex characteristics of the elements. But his research failed again and again. But he did not give in, was not discouraged, and kept ongoing.

In order to completely solve this problem, he went out of the laboratory again and began to go out to investigate and sort out and collect data. In 1859, he went to Heidelberg, Germany for further scientific studies. In two years, he concentrated his energy on physical chemistry, which strengthened his foundation for exploring the inner connections between elements.

In 1862, he inspected the Baku Oilfield, conducted in-depth research on liquids, and re-measured the atomic weight of some elements, which gave him a deep understanding of the characteristics of the elements. In 1867, he took the opportunity to work in the Russian Exhibition Hall of the World Industrial Exhibition held in France, and visited and inspected many chemical plants and laboratories in France, Germany and Belgium, which opened his eyes and enriched his knowledge.

These practical activities not only increased his ability to understand nature but also laid the foundation for his discovery of the periodic law of the elements. Mendeleev returned to the laboratory to continue studying his paper cards.

His mind was often dizzy because of excessive tension. However, his efforts were not in vain, and on February 19, 1869, he finally discovered the law of elemental cycles. His periodic law states that the properties of simple objects, as well as the forms and properties of elemental compounds, have a periodic dependence on the size of the atomic weight of the elements.

Everyone retested the results, Thallium is 190.9, Iridium is 193.1, platinum is 195.2, and gold is 197.2. The practice has confirmed Mendeleev’s assertion and the correctness of the periodic law.

In the periodic table prepared by Mendeleev, there are still many spaces, which should be filled by elements that have not been found. Mendeleev theoretically calculated the most important properties of these undiscovered elements and concluded that they were between the properties of neighboring elements.

For example, in the two spaces between zinc and arsenic, he predicted that the properties of the two unknown elements were aluminum-like and silicon-like, respectively. Four years after his prediction, French chemist Bouabron discovered gallium from sphalerite by spectroscopic analysis. Experiments have proven that gallium is very similar to aluminum, which is the type of aluminum predicted by Mendeleev.

Aluminum Element | what is Aluminum Toxicity | What Aluminum is Used For

2. The book ”Principle of Chemistry” (1869) was written using the cyclical view of elemental properties, which was translated into various languages ​​and published.

Mendeleev discovered the law of the periodicity of the elements and left an immortal glory in the world, and people gave him a high rating. Engels in the “Dialectics of Nature” a book once pointed out. “Mendeleev unconsciously applied Hegel’s quantity to qualitative laws, and completed a scientific honor, which can be on an equal footing with Levier’s calculation of the orbit of the planet Neptune, which is not yet known.”

Due to the limitations of the times, Mendeleev’s elemental periodic law is not complete. In 1894, the discovery of the rare gas argon was a test and supplement to the cycling law. In 1913, the British physical scientist Moseley study various elements of roentgen after the relationship between wavelength and atomic number and an atomic number equal to the number of confirmed nucleus positive charge carried by, and then clear as the basis for periodic law and not the atomic weight Is the atomic number.

The elementary cycle law has been continuously improved and developed by future generations and has played an increasingly important role in the struggle of people to understand nature, transform nature, and conquer nature.

Dmitri Mendeleyev’s failure to win the Nobel Prize should be the most shocking and regrettable event in the history of Nobel Prize-giving. The Russian scientist discovered the periodicity of chemical elements, made the world’s first periodic table of elements, and foreseen some undiscovered elements.

According to the Nobel records, the Nobel Prize Committee had intended to award the 1906 chemistry prize to the master, but one of the committees eventually kicked Mendeleev off the list. The great chemist died in 1907.

Science can not only “give knowledge to young people, give happiness to the elderly”, but also make people accustomed to labor and the pursuit of truth can create real spiritual and material wealth for the people and can create without its things. ——Dmitri Mendeleev Quotes

A theory that has not been tested in practice, no matter how beautiful it is, will lose weight and will not be recognized; practice without a weighted theory must fail. -Dmitri Mendeleev Quotes

Bian: The inherent potential must rely on systematic knowledge. Intuition can do a lot, but not everything. Only genius and science can get the best results. Spencer: This is the genius of “On Education “. Lifelong work becomes a genius! – Dmitri Mendeleev Quotes

Bian: There is nothing easier to throw in vain than time, and it is more cherished. Without time, we will not achieve anything in the world.

1. You must find your way out when you are in good times.

2. The first obstacle and the biggest obstacle that hinders our success is unconfidence.

3. Luck is for those who don’t believe they can make their dreams come true. Rich people can create their own luck.

6. Labor creates everything, and laborers create everything. This is the slogan of history.

7. Courage and confidence are two weapons in life. If you use courage often, you will have confidence.

8. We must not be third-class citizens: wait for work, wait for pay, wait for retirement.

9. Genius is like this, lifelong work, you become a genius!

12. A theory that has not been tested in practice, no matter how beautiful it is, will lose weight and will not be recognized; a practice that is not based on a weighted theory will definitely fail.

13. Losing self-confidence will become a coward.

14. The largest market in the world is in our heads.

15. To discover fruitful truths for one person, millions of individuals are required to destroy their lives in failed explorations and miserable problems.

16. Science can not only “give knowledge to young people, give happiness to the elderly”, but also make people accustomed to labor and the pursuit of truth can create real spiritual and material wealth for the people and can create without its things.

17. The most difficult thing in life is not hard work or struggle, but a choice.

19. Without redoubled diligence, there is neither talent nor genius.

20. The seeds of science grow for the people’s harvest.

What is alcohol exactly?|| Reactivity order of alcohols