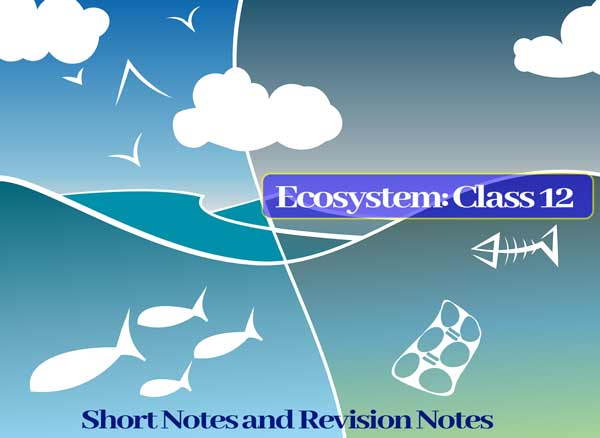 The ecosystem is a self-regulatory and self-sustaining structural and functional unit of landscape (biosphere) consisting of a community of living beings and the physical environment, both interacting and exchanging materials between them. A.G. Tansley (1935) coined the term ecosystem. Ecosystem Class 12 short notes and revision notes are on the bottom.

What is glycerol made of? Is glycerol a sugar? What is Chloroform Structure and Formula? IUPAC Name: How to find the IUPAC name of compounds. What is the use of methanol? Preparation and Properties

How do you find the Valency of an element? Atomic Theory: What is the modern atomic theory? What is vitamin and its function? Vitamins in Chemistry How are alkanes named? What is alkane formula?

The interaction of biotic and abiotic components results in the physical structures that are characteristic for each type of ecosystem. These are:

(ii) Stratification: It is the formation of vertical layers where vegetation is dense, e.g., 5 – 7 strata in tropical rain forests. Stratification is absent or rare in deserts.

(iv) Standing crop: It is the amount of living biomass present in a unit area of an ecosystem.

(v) Standing state: It is the number of inorganic nutrients present at any time in the soil/water of the ecosystem. It tends to vary from season to season and ecosystem to ecosystem.

(i) Productivity: It refers to the rate of biomass production by any trophic level per unit area in unit time. It is measured as weight (e.g., g/m2/yr) or energy (e.g., kcal/m2/yr). It is of following types:

Secondary productivity refers to the rate of assimilation of the organic matter at the level of consumers. It is the amount of energy available at the consumer level for transfer to the next trophic level.

(ii) Decomposition: It is the physical and chemical breakdown of complex organic remains (detritus) with the help of organisms called decomposers. The processes involved are fragmentation, catabolism and leaching.

Detrivores (e.g., termites, earthworms) feed on large pieces, and smaller fragments are left. Pulverisation occur in the digestive tract of animals as a part of it comes out undigested. The process is called fragmentation. The decomposers (e.g., bacteria, fungi) excrete digestive enzymes over the detritus.

It changes insoluble complex organic substances into simple and soluble organic compounds and inorganic substances (catabolism). Soluble substances formed during decomposition are subjected to leaching or passage to deeper layers of soil/groundwater by percolating water.

Humification leads to the formation of a dark-colored amorphous substance called humus, rich in cellulose and lignin. It is highly resistant to microbial action and undergoes decomposition at an extremely slow rate. Humus is further degraded by some microbes and release of inorganic nutrients occurs by the process of mineralisation.

(iii) Energy flow: Sun is the ultimate source of energy in all ecosystems.

Of the incident solar radiation, less than 50 per cent of it is photosynthetically active radiation (PAR). Plants and photosynthetic and chemosynthetic bacteria (autotrophs), fix sun’s radiant energy to make food from simple inorganic materials. Plants capture only 2-10 per cent of the PAR and this small amount of energy sustains the entire living world.

The flow of energy takes place from producers to different consumers in an ecosystem which constitutes different trophic levels.

A food chain involves a nutritive interaction between the living organisms (biotic components) of an ecosystem. Here occurs repeated eating i.e., each group eats the other and is subsequently eaten by some other group of organisms. The number of steps in a food chain is limited to four or five and at each step, a large portion of the energy is lost as heat. In a food chain, there is a unidirectional flow of energy. There is a transfer of 10% energy from one trophic level to another. This is called 10% law formulated by Lindemann in 1942.

Food web is a network of food chains which become interconnected at various trophic levels so as to form a number of feeding connections amongst the different organisms of a biotic community.

An ecological pyramid is a graphical representation of ecological parameters like biomass, energy and number of individuals present in the various trophic levels of a food chain with producers forming the base and top carnivores the tip. Ecological pyramids were developed by Charles Elton (1927) and are therefore also known as Eltonian pyramids.

Calculations of energy content, biomass, or numbers have to include all organisms at that trophic level. No generalizations will be true if few individuals are considered at any trophic level into account.

There are certain limitations of ecological pyramids such as it does not take into account the same species belonging to two or more trophic levels. It assumes a simple food chain, something that almost never exists in nature, it does not accommodate a food web. Moreover, saprophytes are not given any place in ecological pyramids even though they play a vital role in the ecosystem.

Ecological succession is the observed process of changes in the species structure of an ecological community over time. The first group of organisms establishing during an ecological succession are known as the pioneers, primary community or primary colonisers. Climax community is the stable, self-perpetuating and final biotic community that develops at the end of biotic succession and is in perfect harmony with the physical environment. Climax community has maximum diversity and niche specialization. The various biotic communities that develop during biotic succession are termed as seral or transitional communities.

Importance of Biomolecules in Life || What are the 4 main biomolecules?

Oxalic Acid: What is the formula of oxalic acid? | Properties | Uses