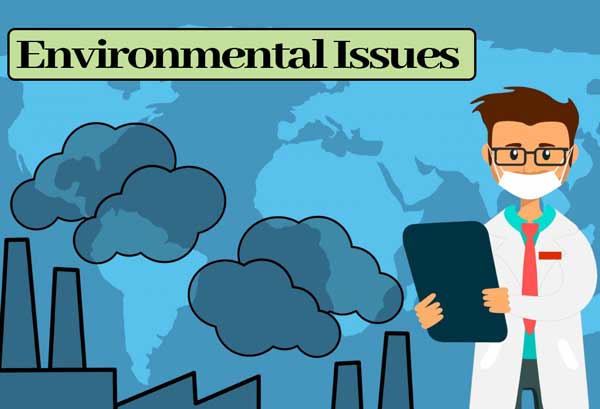 The basic cause of pollution is an ever-increasing rise in the human population that is putting an equally increasing demand for more food, water supply, roads, transportation, dwelling units, schools, hospitals, electricity, more industrial products and a large number of other commodities. This is exerting pressure on natural resources which are, hence, undergoing depletion and degradation.

A pollutant is any substance, chemical or another factor that changes the natural balance of the environment.

On the basis of their existence in nature, form (in which the pollutants persist after release), and nature of disposal, pollutants are of various types.

The various classes of pollutants on the basis of:

Those components which become pollutants when their concentration reaches beyond a threshold value, e.g., CO, CO2, NO2.

Do not occur naturally in nature, but are passed through human activities, e.g., DDT and other pesticides.

(i) Primary pollutants: Persist in the form in which they are added to the environment, e.g., plastic ware, DDT.

(i) Biodegradable: Degrades by natural means, such as heat or microorganisms e.g., sewage, domestic wastes.

Air pollution is the occurrence or addition of foreign particles, gases or pollutants in the air which have an adverse effect on human beings, animals, vegetation, etc.

Acid rain is the rainfall and other forms of precipitation with a pH of less than 5. pH of normal rain is 5.6 – 6.5. Acid rain is caused by large scale emission of acidic gases into the atmosphere. Oxides of sulfur and oxides of nitrogen may react with water vapor to form sulphuric acid (H2SO4) and nitric acid (HNO3) respectively. Acid rain causes reduced rates of photosynthesis and growth and increased sensitivity to drought and disease. Marble statues and buildings are corroded by acid rain e.g., the Taj Mahal in India is affected by acid rain.

BOD is the oxygen in milligrams required for five days in one liter of water at 20°C for the microorganisms to metabolize organic waste.

When a large amount of sewage is dumped into the water, the BOD will increase and thus, dissolved oxygen (DO) will decrease.

(iii) Eutrophication: Phosphorus and nitrates of fertilizers and detergents dissolve in water and accelerate the growth of algae which form a mat on the water surface. The algal growth deoxygenates water which is responsible for the death of fishes and other aquatic organisms. The increased productivity of lake and pond etc. due to nutrient enrichment is called eutrophication. Eutrophication causes a reduction in dissolved oxygen.

– Natural eutrophication occurs slowly at a rate which may not be detectable in human life time.

– Accelerated or cultural eutrophication occurs due to human activities like passage of sewage and run off from fertilised fields into ponds, lakes and other water bodies.

(iv) Biomagnification: The phenomenon, through which certain pollutants, such as pesticide, run off, get accumulated in tissues in increasing concentration along the food chains, and produce fatal effect is called biomagnification or biological magnification.

Excess quantities of heavy metals such as mercury, lead, cadmium, nitrate, fluoride and chlorine are harmful to health in many ways as discussed in the table.

Polluted water is treated in efluent treatment plants before its release into water bodies. There are three steps in sewage treatment:

(i) Primary treatment: Physical treatments such as sedimentation, floatation, fragmentation and filtration are involved in primary treatment, to remove floating and large suspended solids.

(iii) Tertiary treatment: Cleared water is chlorinated or irradiated with UV rays to kill pathogens and for removal of nitrates and phosphates.

As a consequence of thermal pollution, the temperature of water bodies rises and dissolved oxygen content decreases.

It affects aquatic life, as organisms sensitive to high temperatures get killed.

Pollution of air, water and soil with radioactive material is called as radioactive pollution. It affects all the organisms including humans.

Control of radioactive pollution: Leakage of radioactive elements from nuclear reactors, laboratories and industries producing, processing or using them should be totally checked. All safety measures for this purpose should be strictly enforced. Radioactive wastes should be changed into harmless form or stored in safe place where they may gradually decay in a harmless manner.

Soil pollution is the alteration in soil caused by removal or addition of substances and factors which decrease its productivity or quality. Pesticides, fertilizers, chemicals and radioactive wastes are the main source of soil pollution. Pesticides include insecticides, fungicides, algicides, rodenticides and weedicides. Along with target organisms, they harm non-target organisms as well this destroys soil ecosystem.

Control of soil pollution: Soil pollution can be checked by reducing the disposal wastes, appropriate use of chemical fertilizers and use of biological pest control. The most important measure to check land degradation is restoration of forest, crop rotation, improved drainage, etc.

Control of solid wastes: Disposal of waste consists of recovery and recycling, source reduction, burning, and dumping. Burning is the combustion of solid waste containing organic compounds in open places. Incineration is controlled aerobic combustion of wastes inside chambers at a temperature of 900-1300°C. Pyrolysis is combustion inside chambers in the absence of oxygen at a temperature of 1650°C. It does not yield pollutants. In source reduction, garbage and other organic wastes are taken out of urban areas and used for the formation of compost, biogas, and manure.

Unpleasant loud sound is called as noise (also called slow killer) and disturbing level of noise is known as noise pollution. Noise pollution is measured in decibels. Generally sound above 80 dB is termed as noise. A sound more than 115 dB is harmful to the ears. Various sources of noise pollution include industries, social events, transportation, construction activities, etc.

A number of temporary physiological changes occur in the human body as a direct result of noise exposure. These are a rise in blood pressure, a rise in intracranial pressure, an increase in heart rate and breathing and an increase in sweating. A sudden loud noise of 150dB or more may cause permanent loss of hearing.

Control of noise pollution: Green muffler scheme involves growing green plants along roadsides to reduce noise pollution. Specific legislation and regulations should be proposed for designing and operation of machines, vibrations control, sound-proof cabins and use of sound-absorbing materials.

A greenhouse is a glass house that is used for growing plants especially during winter. The glass panels let the light in but do not allow the heat to escape, warming up the greenhouse.

Similar warming effect is observed in atmosphere, where certain gases like carbon dioxide trap the heat and does not let it escape.

Greenhouse gases (GHGs) or radiatively active gases are essential for keeping the earth warm and hospitable. They prevent a substantial part of longwave radiations emitted by earth to escape into space. Rather greenhouse gases radiate a part of this energy back to the earth.

The phenomenon is called greenhouse flux. Greenhouse flux maintains the mean annual temperature of earth nearly 15°C. In its absence, it will fall to –18°C.

Some strategies should be followed to deal with global warming: Vegetation cover should be increased for photosynthetic utilization of carbon dioxide; chlorofluorocarbon should be replaced with some other substitute having little effect on global warming; reducing the use of nitrogen fertilizers to reduce nitrous oxide emission; minimizing the use of fossil fuel to reduce the greenhouse gas emission, etc.

Deforestation is removal, decrease or deterioration of forest cover of an area. It is caused due to jhum cultivation, hydroelectric projects, forest fires, human establishments, road construction, overgrazing, mining and for timber production.

A Bishnoi woman Amrita Devi showed exemplary courage by hugging a tree and daring king’s men to cut her first before cutting the tree. In her honour, the Government of India instituted the Amrita Devi Bishnoi Wildlife Protection Award for individuals or communities from rural areas that have shown extraordinary courage and dedication in protecting wildlife. During Chipko Movement of Garhwal Himalayas, local women showed enormous bravery in protecting trees from the axe of contractors by hugging them.

The Government of India in 1980s has introduced the concept of Joint Forest Management (JFM) so as to work closely with the local communities for protecting and managing forests. In return for their services to the forest, the communities get benefit of various forest products (e.g., fruits, gum, rubber, medicine, etc.) and thus, the forest can conserved in a sustainable manner.

Amine Properties and Uses || What are the different types of amines?