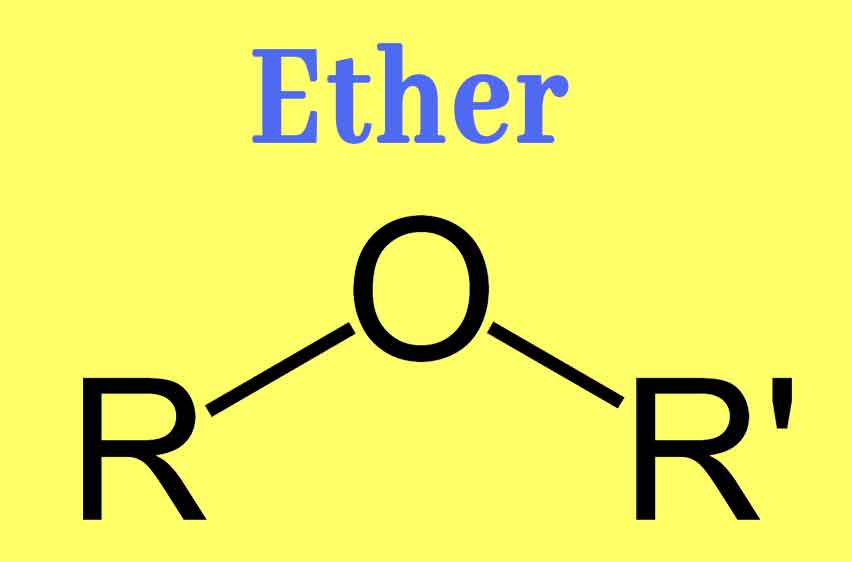 Ether is a product in which hydrogen is a hydroxyl group of alcohol or phenol is substituted with a hydrocarbon group.

The general formula is RO-R, and R and R’ may be the same or different. The same is called simple ether or symmetric ether; the other is called mixed ether.

If R and R ‘are carbon atoms at both ends of an organic group, they are called cyclic ethers, such as ethylene oxide.

Most ethers are colorless liquids at room temperature, have scent, low boiling point, lighter than water, and stable properties.

Ethers generally have anesthetic effects. Such as ether is a commonly used inhalation anesthetic in clinical practice.

The general structure of the ether is ROR (R ‘), Ar-OR or Ar-O-Ar (Ar’) (R = hydrocarbon group, Ar = aromatic hydrocarbon group). The bond angle of the ether is about 110 °, the length of the CO bond is 140pm, the energy of the rotational energy barrier of the CO bond is very small, and the bonding ability of water, alcohol and oxygen in the ether molecule is similar. According to the valence bond theory, the hybrid state of the oxygen atom is sp3.

According to the two types of hydrocarbon groups, ethers can also be divided into fatty ethers and aromatic ethers.

Cyclic ethers such as tetrahydrofuran and 1,4-dioxane are miscible with water. This is because the oxygen atoms of these ether molecules are more exposed outside the molecule than alkyl ethers (chain ethers), so the polarity is greater than the latter.

Most ethers are insoluble in water, but the commonly used tetrahydrofuran and 1,4-dioxane are completely miscible with water because they form hydrogen bonds with water. Although the number of carbon and oxygen atoms of ether is the same as that of tetrahydrofuran because the latter’s oxygen and carbon framework jointly form a ring, the oxygen atoms protrude out, and it is easy to form hydrogen bonds with water.

Since the two are rarely soluble in each other, and most organic substances are easily soluble in ether, ether is commonly used to extract various ether-soluble substances from water, but the ether extract contains a small amount of water.

Before distilling ether, it needs to be dried. Water, at the same time, also loses a portion of the ether during the extraction process. Ether is a commonly used solvent in the laboratory, and the salt compounds are insoluble in it.

Diethyl ether is an anesthetic commonly used in surgery. Its effect is not chemical, but a physiological change caused by dissolving in the fat of nerve tissue. This anesthetic effect is determined by the partition coefficients of ether in the fatty and aqueous phases. Vinyl ether is also an anesthetic. Its anesthetic performance is 7 times stronger than that of ether, and its effect is very fast. However, it has the danger of quickly reaching the anesthesia level, which limits its practical application in this area.

Ether and other ethers can form non-volatile peroxides if they are in contact with air or exposed to light.

Peroxide ether is a highly explosive polymer. When the ether containing this compound is distilled, the peroxide ether remains in the container, and it will explode when it is continuously heated. In order to avoid accidents, you should check before using ether or other ethers such as tetrahydrofuran that have been stored for a long time.

If it contains peroxide, add an equal volume of 2% potassium iodide acetic acid solution, which will release iodine and make the starch solution purple. Or blue. Add about 1/5 of the volume of ferrous sulfate solution prepared by ferric sulfate and 50% sulfuric acid, and shake vigorously to destroy the peroxide.

Peroxide can also be reduced with lithium aluminum hydride or the like. In order to prevent the formation of peroxides, 0.05 μg / g sodium diethylamino thioformate was added to the commercially available anhydrous ether as an antioxidant. Even if the ether does not contain peroxides, due to the high volatility of the ether and its flammable vapor, there is often the danger of explosion and fire. Be careful and use precautions when using it.

The ether has a lone electron pair on the oxygen atom. As a base and concentrated sulfuric acid, hydrogen chloride or a Lewis acid (such as boron trifluoride), it can form a secondary ammonium salt.

Diethyl ether can absorb a considerable amount of hydrochloric acid gas to form ramie sheep salt. If put together with an organic base such as an ether solution of amine, the amine hydrochloride can be precipitated. This is a method for preparing amine salts.

If an ether is reacted with a secondary salt formed by boron trifluoride and a fluorinated alkane, a tertiary ammonium salt may also be formed.

This tertiary salt easily decomposes into positive alkyl ions and reacts with nucleophiles, so it is a very useful alkylating reagent.

Ether and hydroiodic acid are heated together to break the carbon-oxygen bond. This kind of cleavage is that the acid and the ether first form the yam salt, and then, depending on the nature of the alkyl, SN1 or SN2 reaction occurs, and the primary alkyl group In the SN2 reaction, the tertiary alkyl group is prone to SN1 reaction to generate iodoalkanes and alcohols. In the presence of excess acid, the produced alcohols are also converted into iodoalkanes.

Hydrobromic acid and hydrochloric acid can also perform the above reaction, but since they are not reactive with hydroiodic acid, a concentrated acid and a higher reaction temperature are required.

Aryl groups are conjugated with lone electron pairs of oxygen and have certain double bond properties, making them difficult to break. Zeisel S (zeisser) methoxy (-OCH3) quantitative measurement method is based on the above reaction.

Naturally complex organic molecules often contain methoxy groups. A certain amount of the compound and an excess of hydriodic acid with a methoxy group-containing heat, the generated methyl iodide was distilled into silver nitrate in alcohol solution, and referred to in accordance with the generated silver iodide content can be calculated of the original molecule Methoxy content.

Asymmetric cyclic ethers ring open, resulting in a mixture of the two products.

When hydrochloric acid and tetrahydrofuran are reacted, it is necessary to add, anhydrous zinc chloride in the presence of excess acid to produce 1,4-dichlorobutane , which is an important intermediate raw material for nylon.

General ethers are relatively stable compounds, so they are often used as solvents. Ether is stable to alkali, e.g., aqueous sodium hydroxide solution and an ether, an alcohol solution of sodium alcohol and sodium amide in liquid ammonia solutions were unresponsive. However, compounds such as ethylene oxide are completely different from general ethers. They can not only react with acids, but also have mild and fast reaction conditions, and can also react with different bases.

The reason is that its three-membered ring structure prevents the orbitals of the atoms from fully overlapping on the front side, but is connected to each other by curved bonds. Due to this relationship, there is a tension in the molecule, which easily reacts with multiple reagents and opens the ring. It is very useful in organic synthesis and can be used to synthesize a variety of compounds.

The ring-opening reaction of diborane and epoxide is also an acid-catalyzed ring-opening. Diborane can be regarded as a dimer of borane.

The 6-electron configuration of the outer layer of boron can be complexed with the oxygen in the epoxide. Its effect is similar to that of protonic acids, so the negative hydrogen in borane is transferred to ring carbon atoms with more substituents.

The base-catalyzed ring-opening is mainly active reagents with strong nucleophilic ability. There is no positive or negative charge on the epoxy compound. This is an SN2 reaction.

The break of the C—O bond and the bond between the nucleophile and the ring carbon atom. The formation proceeds almost simultaneously, at which time the reagent chooses to attack ring carbon atoms with fewer substituents because this carbon has less steric hindrance.

Alcohols can be prepared by dehydration reactions:

The reaction requires high temperatures (usually at 125°C). This reaction also requires acid catalysis (usually sulfuric acid). The above method is effective for the preparation of symmetric ether, but it is powerless for asymmetric ether.

This reaction is called: Williamson synthesis. This reaction is accomplished by treating the alcohol with a strong base to form an alkoxide, which is then reacted with a hydrocarbon molecule with a suitable leaving group. The leaving group here includes halogen such as iodine, bromine, or sulfonate.

In a similar reaction, alkyl halohydrocarbons can also undergo nucleophilic substitution reactions with phenol anions. Although RX cannot react with alcohol, phenol can carry out the reaction (phenol is much more acidic than alcohol). It can pass a strong base such as sodium hydride to form a phenol anion before reacting. Phenol can replace the X leaving group in the halogenated hydrocarbon to form the structure of phenol ether. The process is SN2 mechanism.

The reaction for Ullmann diaryl ether synthesis is very similar to the Williamson reaction, except that the substrate is an aromatic halogenated hydrocarbon. This reaction requires a catalyst, such as copper.

The alcohol can be electrophilically added to the activated olefin:

This reaction requires acid catalysis. Mercury trifluoroacetate (Hg (OCOCF3) 2) can often be used as a catalyst for this reaction. The reaction produces a solid with Vladimir Vasilyevich Markovnikov. Chemical ethers. Using similar reaction conditions, tetrahydropyranyl ether (THP) can be used as a protecting group for alcohols.

In January 2014, the industrialization demonstration of the dimethoxymethane project was recognized by more than ten experts including the Chinese Academy of Engineering, the Chinese Academy of Sciences, and domestic professors. Compared with standard gasoline, dimethoxymethane gasoline reduces carbon monoxide and hydrocarbon emissions by about 70%, reducing the contribution of car exhaust to PM2.5.

There are three main applications of dimethyl ether fuel in diesel engines.

Dimethyl ether was first introduced into diesel engine cylinders to improve the ignition performance of diesel engines when using methanol. There are many introduction schemes, and the typical one is the Torch Ignition Chamber (TIC) scheme.

Considering that dimethyl ether has a high cetane number and good self-ignitability, a small amount of dimethyl ether is allowed to enter the ignition chamber as an ignition promoter at the beginning of the intake stroke or compression stroke.

The combustion is advanced at the later stage of the compression stroke, which can make the cylinder temperature. The increase will promote the ignition of the main fuel, and will also have some impact on the performance and emissions of the diesel engine. The introduction of dimethyl ether has significantly improved the cold start performance of diesel engines.

The diesel engine directly uses liquid dimethyl ether as fuel to burn directly in the cylinder. However, the technology of dimethyl ether special injection pump is still immature, and it cannot solve the lubrication and leakage problems of high-pressure oil pump plunger pair and injector needle valve pair caused by low liquid viscosity of dimethyl ether. Therefore, this method is difficult.

3. The mixed combustion method of dimethyl ether and diesel.

At this stage, ether is mainly applied to diesel engines by the mixed combustion method. Diethyl ether is highly volatile, easily combustible, and has a high oxygen content. After mixing with diesel, it can improve the combustion of the mixed fuel and reduce emissions and pollution.

What is heavy water used for?