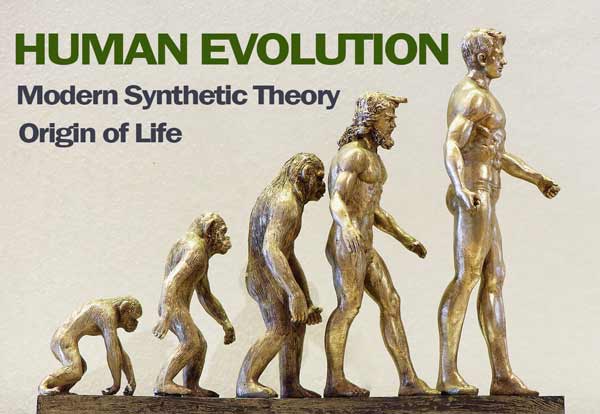 Evolution (evolution theory) is unrolling or unfolding of nature that brings about an orderly change from one form or condition to another resulting in descendants becoming different from ancestors.

Many theories were put forward to explain the origin of life.

The origin of life is considered a unique trend in the history of the universe.

Most accepted theory to explain the origin of the universe is the Big-Bang theory which was proposed by Abbe Lemaitre in 1931 according to which the universe had an explosive beginning.

The universe originated about 15 billion years ago by a big bang (thermonuclear explosion) of a dense entity. The universe expanded and hence the temperature came down. Hydrogen fused into progressively heavier atoms of different kinds of elements found today.

Panspermia theory was proposed by Richter in 1865 according to which life came from outside in the form of spores.

The theory of spontaneous generation believes that under certain conditions non-living substances gave rise to living beings spontaneously. It was supported by many old scholars like Thales, Anaximander, Aristotle, Plato, Epicurus, etc.

This evolution theory was challenged by Francesco Redi, Spallanzani, and Pasteur.

The modern hypothesis of the origin of life was formulated by Haeckel. This idea was elaborated in the chemical theory (in the 1920s) by two workers independently: a Russian biochemist A.I. Oparin and an English biologist J.B.S. Haldane. It was summarised by Oparin in his book “The Origin of Life”.

Oparin and Haldane state that –

– Spontaneous generation of life under the present environmental conditions is not possible.

– Earth’s surface and atmosphere during the first billion years of its existence were radically different from today’s conditions.

– Earth’s initial atmosphere was a reducing one.

He created similar conditions on a laboratory scale. He created electric discharge in a closed flask containing CH4, H2, NH3 and water vapor at 800°C. He observed the formation of amino acids. In similar experiments, others observed, the formation of sugars, nitrogen bases, pigment, and fats. With this limited evidence, the first part of the conjectured story, i.e., chemical evolution was more or less accepted.

The synthesis of carbohydrates, fats and amino acids and other complex organic substances probably occurred in sea, which had been described by Haldane as ‘The hot dilute soup’. The formation of a protein molecule is considered a landmark in the origin of life.

The large organic molecules which were synthesized abiotically on primitive earth later came together, and due to intermolecular attraction, they formed large colloidal aggregates. Such water-bound aggregates have been named microspheres by Sydney Fox.

Coacervate is an aggregate of macromolecules, such as proteins, lipids, and nucleic acids that form a stable colloid unit with properties that resemble living matter.

When the supply of existing organic molecules was exhausted, some of the heterotrophs might have evolved into autotrophs.

The prokaryotes gradually modified to adapt themselves according to new conditions. They developed a true nucleus and other specialized cell organelles. Thus free-living eukaryotic cell-like organisms originated in the ancient ocean, presumably about 1.5 billion years ago.

Primitive eukaryotes led to the evolution of protists, plants, fungi, and animals. Life was present on earth about 3.9 billion years ago.

To understand and explain the process of evolution various theories have been put forward by various scientists such as Lamarck, Darwin, etc.

It is the modified form of Lamarckism supported by a number of scientists viz Spencer, Cope, Richard, Wells, Lawrence, Nageli, etc.

According to it, the acquired characters which become incorporated in the germplasm are heritable and accumulate generation after generation resulting in the origin of new species.

Neo-Lamarckism explains that germ cells may be a_ected by the environment either directly or indirectly (i.e., through somatic cells).

Dobzhansky (1937) in his book ‘Genetics and Origin of Species’ provided the initial basis of synthetic theory. ‘Modern Synthetic Theory of Evolution’ was designated by Huxley in 1942.

According to the synthetic theory, there are five basic factors involved in the process of organic evolution(evolution theory).

Evolution occurs through the accumulation of genetic variations in the gene pool of a population over long periods of time.

The change in genes occurs in many ways such as mutations, genetic drift, gene migration, gene recombination, and hybridization.

Mutations: Gene mutation is a random change in the base sequence of a gene. The mutated gene may give rise to a new protein or may fail to produce any. This may change the phenotype (trait).

Gene variation results in a change in gene frequency.

(ii) Genetic drift: The theory of genetic drift was developed by geneticist Sewall Wright in 1930. It is also called as Sewall Wright Effect or scattering of variability. Genetic drift refers to chance elimination of the genes of certain traits, independent of gene’s useful or harmful effect when a section of the population migrates or dies of natural calamity. It alters the gene frequency of the remaining population.

Hence genetic drift is a mechanism of evolution that acts in concert with natural selection to change species characteristics over time. Two important examples of genetic drift are the bottleneck effect and founder effect.

Founder effect: When a few individuals or a small group of individuals from some large population invades a new or isolated geographical region, they become the founders. These founders carry on a limited portion of the parental gene pool. The descendants of the founder isolate in new areas and tend to have allele ratios similar to the founders rather than to the source population.

(iv) Gene recombination: It occurs due to the dual parentage, independent assortment of chromosomes, crossing over during meiosis, and random fusion of gametes and formation of new alleles.

(v) Hybridization: It is the crossing of organisms which are genetically different in one or more traits (characters). It helps in intermingling of genes of different groups of the same variety, species and sometimes different species.

Organisms possessing hereditary characteristics that are helpful, either in the animal’s environment or in some other environment, are favoured in the struggle for existence. Thus, the offspring are able to benefit from the advantageous characteristics of their parents.

It is differential reproduction which means some members of the population have traits (genes) that enable them to grow up and reproduce at a higher rate and leave more surviving offsprings in the next generation than others, i.e., they are selected by nature. Based on different organism-environment relationships, following different kinds of natural selections have been recognized.

Stabilizing selection or Balancing selection: It acts in the absence of large scale environmental change or directional changes for a long period. It favors an intermediate form and eliminates the extreme variants.

In the past, the bark of trees was covered by whitish lichens, so white moths escaped unnoticed from predatory birds.

After industrialization, barks got covered by smoke, so the white moths were selectively picked up by birds.

It refers to the mechanisms which check the populations of two different species from interbreeding.

Homology is the similarity between organs of different animals based on common ancestry or common embryonic origin and built on the same fundamental pattern, but perform varied functions and have a different appearance. E.g., the flipper of a seal, wing of a bat, forelimb of a mole, front leg of the horse and the arm of a man look very different, perform different functions, but exhibit the same structural plan including same bones.

The study of homologous structures illustrates the occurrence of adaptive radiation (divergent evolution).

The study of analogous structures illustrates the occurrence of convergent evolution.

Homology in the embryos of closely related vertebrates indicates the evolutionary relationship of the adult vertebrates.

Haeckel formulated the “Recapitulation theory or Biogenetic Law” regarding this. This theory says that “ontogeny recapitulates phylogeny”, i.e., life history recapitulates evolutionary history. This means an organism repeats its ancestral history during its development. For example, in the development of a frog, a fish-like tailed larva is formed, which swims with the tail and respires by gills. This indicates that the frog has been evolved from a fish-like ancestor.

Living organisms possessing characters of two different groups of organisms are known as the connecting links.

Examples – Viruses: between non-living and living,

Euglena: between plants and animals,

Peripatus: between Annelida and Arthropoda,

Balanoglossus: between non chordates and chordates,

Chimaera: between cartilaginous and bony fishes. They give a hint about the evolution of one group from the other.

On the other hand, fossils that show combined features of two groups are termed missing links, e.g., Archaeopteryx.

Similarities in the biochemical composition, reactions, and physiological activities are the most convincing evidence of common ancestry. Aspects of biochemistry that indicate biochemical affinity are metabolic processes, enzymes, hormones, blood and lymph, blood proteins, blood groups and molecular homology.

The direct evidence of organic evolution comes from the study of fossils. The term fossil refers to the petrified remains or impressions of organisms that lived in the past and got preserved in the sedimentary rocks. These include bones, teeth, shells and other hard parts of animal or plant body, and also impressions or imprints left by previous organisms in the soft mud or the moulds and casts of entire organisms.

Paleontology is the study of past life based on fossil records. Their study reveals the existence of life in the past and illustrates the course of the evolution of plants and animals.

Fossils can be arranged in a chronological sequence according to their age only when their correct age is determined. The age of fossils is determined by radioactive dating technique.

Geological time is a chronological order or history of evolution based upon the study of fossils. It has been divided into eras, periods and epochs. The fossil studies have given evidence of several mass extinctions.

Human evolution, or anthropogenesis, is the part of biological evolution concerning the emergence of Homo sapiens as a distinct species from other hominids, great apes and placental mammals.