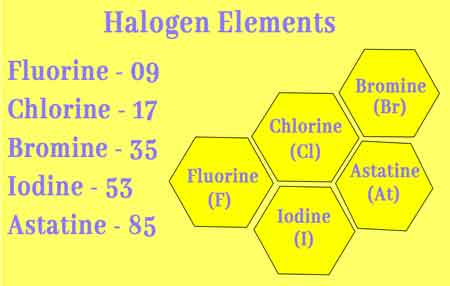 A halogen element refers to an element of Group A of the periodic system.

Including fluorine (F), chlorine (Cl), bromine (Br), iodine (I), thorium (At), Tennessine(Ts), referred to as halogen. They all exist as typical salts in nature and are salt-forming elements.

The simple elements of halogen elements are diatomic molecules, and their physical properties change very regularly. As the molecular weight increases, the dispersion force between halogen molecules gradually increases and the color becomes darker.

Halogens are oxidizing, and the elemental fluorine is the most oxidizing. Halogen and metal elements constitute a large number of inorganic salts, and they also play an important role in fields such as organic synthesis.

Because halogen can form salts with many metals, English halogen (Halogen) comes from the Greek words halos (salt) and gennan (form). In Chinese, the original meaning of halogen is saline land.

Others: K / Na + single halogen are white, the liquid is transparent and colorless

Fluorine is a pale yellow gas at room temperature and is highly toxic. It reacts with water to generate hydrofluoric acid and oxygen immediately and burns. At the same time, it can rupture the container. There is a danger of explosion when the amount is large.

Fluorine and hydrogen fluoride (hydrofluoric acid) is highly corrosive to glass. Fluorine is the most non-metallic element (and does not have a d orbital), and can only be -1 valence.

The reaction of elemental fluorine with the salt solution is that it reacts with water first, and the generated hydrofluoric acid reacts with salt; passing into the alkali may cause an explosion.

Aqueous hydrofluoric acid is a medium-strong acid. But it is the most stable hydrohalic acid because the fluorine atom contains a large electron affinity. If the skin is inadvertently stuck, it will corrode to the bone marrow. Chemically active, can react with almost all elements (except inert gases such as helium, neon ).

Chlorine is a yellow-green gas at room temperature and is soluble in water. One volume of water can dissolve two volumes of chlorine. It is toxic and reacts with water to form hydrochloric acid (HCl) and hypochlorous acid (HClO).

Generally speaking, the element is more oxidizing with the increase of its valence, but the oxidizing capacity of the oxo acid of chlorine is HClO> HClO 2 > HClO 3 > HClO 4.

Liquid bromine, a dark reddish brown liquid at normal temperature, is soluble in water, 100 grams of water can dissolve about 3 grams of bromine.

Extremely volatile and toxic, the vapor strongly irritates the eyes and mucous membranes. The aqueous solution is called bromine water.

Bromine must be sealed with a water seal on the container to prevent vapors from escaping and endangering the human body. It is oxidizing and has a variety of variable valences.

It reacts weakly with water at room temperature to form hydrobromic acid and hypobromous acid. Heating can speed up the reaction. Hydrobromic acid is a strong acid, which is stronger than hydrochloric acid.

Bromine is generally used in organic synthesis. Can also be used for the extraction of some substances (such as iodine)

(Due to different concentrations, the following colors may appear in the question: brownish yellow, purple (red), brown)

Low toxicity, weak oxidizing property, and various valences. It has sublimation property. It is sublimated when heated. The steam is purplish red, but dark blue when there is no air. Sometimes it needs to be sealed with water.

However, the corrosivity is the weakest of all non-radioactive halogen acids, because the radius of the iodine atom is larger, the electron affinity and electronegativity are smaller, and it is easy to lose hydrogen ions.

Reducible. Iodine is the safest of all halogens, because fluorine, chlorine, and bromine are more toxic and corrosive than iodine, and thallium is less toxic than iodine but radioactive. However, iodine is not safe for the human body, especially iodine vapour, which can irritate the mucous membranes.

Even to iodine, but also with non-toxic iodic acid salts (e.g., potassium iodate KIO₃). So all halogens are not safe for the human body.

At (At) is extremely unstable. Thorium 210 is the isotope with the longest half-life , and its half-life is only 8.1 hours. The content of tritium in the crust is only one trillionth of a trillion, and it is mainly the product of radium, tritium and tritium auto-split.

Tritium is a radioactive element. Its amount is small, unstable, and difficult to gather, and its “Lushan true face” has not been seen before (metallicity should be stronger. The color should be darker than iodine and may be a black solid). But scientists have synthesized 20 isotopes of plutonium.

Thallium has more metallic properties than iodine, and can combine with silver to form AgAt, which is extremely difficult to reduce. The hydrofluoric acid (HAt) produced by tritium and hydrogenation is the strongest and most unstable hydrohalic acid, but the corrosiveness is the weakest of all hydrohalic acids.

In 2010, the Dubna Joint Nuclear Research Institute, headquartered outside the Russian capital Moscow, successfully synthesized a new element 117, the latest overweight element artificially created in the laboratory. One described that this newly discovered paper had been accepted for publication in the Physical Review Letters.

The new element has not yet been named, into the periodic table 116 elements and 118 elements of a position between, both of which have been found. This super heavy element is usually very radioactive and decays almost immediately.

However, many researchers believe that even heavier elements may occupy a ” stable island ” that allows superheavy atoms to persist for some time. The new work further supports this view. Following a radioactive decay analysis of the new element, Yuri’s research team wrote in a new paper: “Providing experimental verification for predicting the presence of the overweight element ‘ stable island ‘.”

In 2012, the Russian scientific research team successfully synthesized element 117 again, thus clearing the obstacle for the official addition of element 117 to the periodic table.

\Although element 117 was successfully synthesized for the first time in 2010, the International Union of Theoretical and Applied Chemistry (IUPAC) asked the Dubna Joint Nuclear Research Institute to synthesize the element again before they could officially approve its addition to the periodic table.

A senior director of the Dubna Joint Nuclear Research Institute said that the research team has successfully completed the verification and formally submitted an application for registration of element 117 to IUPAC, if successful, element 117 will be named within one year, And classified into the periodic table.

It is reported that the Dubna Joint Nuclear Research Institute uses a particle cyclotron to bombard the 249 atoms containing 97 protons and 152 neutrons with 48 calcium atoms consisting of 20 protons and 28 neutrons. There are 117 new protons, 5 of which have 176 neutrons, and the other has 177 neutrons.

The International Chemical Society (IUPAC) finally determined that element 117 was synthesized by scientists at Lawrence Livermore National Laboratory , Oak Ridge National Laboratory, and the United Nuclear Research Institute in Dubha, Russia. Element 117 is named tennessine (abbreviation Ts) beginning with the spelling of the English place name of “Tennessee,” and the Chinese character is the newly created element word (Ishida).

The outermost layer has the same number of electrons, all of which are 7 electrons. Due to the different number of electron layers and the different atomic radii, the radius from F to I increases in order. Therefore, the attraction of the nucleus to the outermost electrons weakens in turn and is obtained from the outside. The electron’s ability weakens in turn, and the element’s oxidizing ability weakens.

The chemical properties of halogens are very similar. Each of them has 7 electrons on the outermost electron layer, and there is a tendency to obtain one electron to form a stable octahedral halide ion. Therefore, halogens are oxidative, and the smaller the atomic radius, The more oxidizing, so fluorine is the most oxidizing of the elemental. Except for F, the oxidation state of halogen is +1, +3, +5, +7. It forms ionic compounds with typical metals , and other halides are covalent compounds . Halogen combines with hydrogen to form hydrogen halide, which dissolves in water to generate hydrohalic acid.

Compounds formed between halogens are called interhalides, such as ClF₃ ( chlorine trifluoride ), ICl (chloroiodide compound). More halogens can form a valence oxyacids, such as HClO, HClO₂, HClO₃, HClO₄. Halogens are very stable. Except for I₂, halogen molecules are difficult to decompose at high temperatures. The use of halogens and their compounds is very wide. For example, we have to eat salt every day, mainly made of chlorine and sodium elements of chlorides , and also contains a small amount of MgCl₂.

The toxicity of halogen element decreases from F in order.

In addition, the chemical properties of halogen are relatively lively, so halogen exists only in the natural state in a compound state.

Conclusion: With the increase of the number of nuclear charges, the reaction of halogen element with H 2 changes: F 2 , Cl 2 , Br 2 , I 2

① Vigorous degree: gradually weakened ② Stability of HX generation: The conditions of reaction with hydrogen are different, and the stability of the generated gas hydride is different, HF> HCl> HBr> HI.

Chlorine difficult to dissolve in saturated sodium chloride solution, and the iodine is soluble in potassium iodide solution (generating the I3 –)

Note: the concept of extraction and separation

· What is the phenomenon of adding carbon tetrachloride to bromine water and shaking it? (Layered, lower orange red upper colorless)

· What is the phenomenon of adding kerosene to iodine water and shaking? (Layered, the upper layer is fuchsia, the lower layer is colorless)

Physical and chemical properties of halogen

Generally speaking, the boiling point of liquid halogen molecules is higher than their corresponding alcane. This is mainly because halogen molecules are easier to be electrodelized than hydrocarbon chains, and the molecular polarization increases the connection between molecules (the positive and negative electrodes attract each other), which requires us to provide more energy to the liquid to make It evaporates.

What kind of gas is propane?|| What is the Use of propane gas?