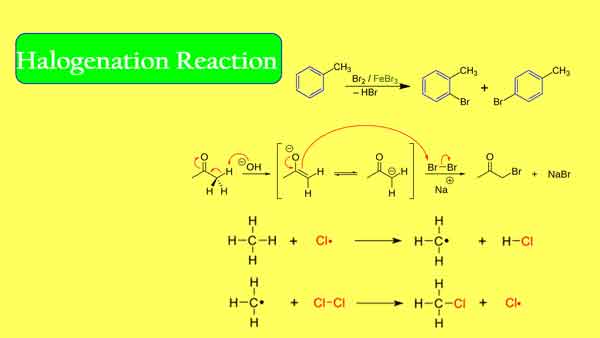 Halogenation reaction is a chemical unit process, which is the process of introducing halogen atoms into the molecules of organic compounds. The most commonly used method is to introduce halogen atoms into hydrocarbon molecules to form “halogens.” This is the very important NCERT chemistry topics for class 11 and board exams.

Because halogenated hydrocarbons are quite active, they are easily affected by other atoms or “Base” substitution is often used in organic synthesis to produce intermediates.

Halogenation can also refer to the process by which an inorganic compound (such as a metal) is introduced into a halogen atom.

The halogenation reaction and chemical dosage are related to the characteristics of its chemical structure, the functional group of organic compounds or halogenated halogen elements. Halogen is a general term for five elements: fluorine, chlorine, bromine, iodine, and thallium.

Therefore, halogenation is also divided into fluorination, chlorination, bromination, and iodization. Iodine is much more expensive than chlorine and bromine, so the most commonly used in chemical production is chlorination and bromination.

Commonly used chlorinating agents are chlorine or hydrogen chloride. Because fluorine gas is too oxidizing, the reactants are usually directly oxidized and decomposed, so the corresponding fluorinating agent is generally used for fluorination.

Organic Compounds of the Halogenation reaction

Saturated hydrocarbons are typically added without halogens but halogenated through free radicals, but instead, replace hydrogen atoms with halogens. Halogenated species are often determined in regional chemistry by relatively weaker CH bonding.

This reaction tends to the positions of the second and third carbons because the more stable the structure, the more the free radicals and the transition energy levels will react. Free radical halogenation is used in the industrial manufacture of methane chloride.

Halogenation of the addition of olefins will produce an intermediate halide. In particular, this intermediate product can separate it out.

This halogenation mechanism is affected by halogen elements. Fluorine and chlorine have electrophilic properties and are stronger halogenating agents. Bromine is a weaker halogenating agent compared to fluorine and chlorine, but iodine is the weakest among them. The mechanism of this dehydrohalogenation follows a reverse trend: iodine is the easiest to remove from organic matter and organic fluoride has the highest stability.

The Hunsdiecker reaction is to propose a short smelting halide from a carboxylic acid. The first one will produce a silver salt, and then it will be oxidized with a halogen element.

It has recently been discovered that hydrogen fluoride can be used as a source of fluorine at the cathode. This method is called electrochemical fluorination (ECF). In addition to electrochemically producing fluorine, there are various applications of fluorinating reagents such as xenon difluoride and cobalt fluoride.

Chlorination produces an exothermic reaction. All saturated or unsaturated compounds react directly with chlorine. This composition often requires ultraviolet light to help crack the chlorine atom. Chlorination is commonly used in industry to make 1,2-dichloroethane (PVC) and ethane as a solvent. The other is oxychlorination using a combination of hydrogen chloride and oxygen. This effect must be directly chlorinated (using Cl2).

Oxychlorination is the mixing of hydrogen chloride (HCl) and oxygen (O2) to chlorinated hydrocarbons. This method is used industrially because hydrogen chloride is cheaper than chlorine. The most commonly used reactant is ene reaction.

This reaction begins with copper chloride (CuCl 2, a catalyst produced from 1,2-dichloroethane). Sometimes CuCl 2 acts as a co-catalyst in silica to help produce KCl, LaCl3, or AlCl3. In addition to silica, alumina, diatomaceous earth or pumice can also be used as an auxiliary reaction.

Because these reactions emit high energy (238kJ / mol), the catalytic temperature must be controlled to avoid thermal decomposition. Catalysis plays an important role in the double bond chlorination of hydrocarbons because CuCl 2 is one of the compounds in which a double bond of a chlorine atom is provided.

Copper chloride is produced by the reaction of cuprous chloride with oxygen and then with hydrogen chloride.

HCl is oxychlorination from the above steps in a cyclic reaction, and the reactants will be generated by themselves.

Bromination is also more selective than chlorination because the reaction releases less energy. The general bromination is the addition of Br2 to olefins. In nature, bromination of saturated hydrocarbons and aromatic compounds is more common and organic bromine is formed.

A commonly used catalyst is bromoperoxidase, which uses a combination of bromine and oxygen to form an oxidant. An example of bromination is the anesthetic halothane, which can be organically synthesized in trichloroethylene.

Organic bromine compounds are the most common halogenated compounds in nature, and their formation is catalyzed by bromoperoxidase. The ocean is estimated to release 1-2 million tons of bromoform and 56,000 tons of methyl bromide each year.

Iodine is the weakest reacted halide and is the most difficult to react with most organic compounds. The addition of iodine and olefins is an analytical method called iodine, which is a method used to measure the degree of unsaturation of fat. Iodoform reaction kits will degrade methyl ketones.

Elements other than argon, neon, and helium will directly react with fluorine to form fluoride. The selectivity of chlorine is strong, but it can still react with most metal elements and heavier non-metal elements.

Following the trend, bromine is less active, while iodine is the least active. Possible reactions like gold chloride produce gold chloride. Industrial direct chlorination of metals is less important because it is easier for metal oxides to react with hydrogen halides for halogenation. The production of phosphorus trichloride and sulfur monochloride is an example of the large-scale direct halogenation of inorganic compounds.

What is the formula of sodium thiosulphate?

Biotechnology and its Applications