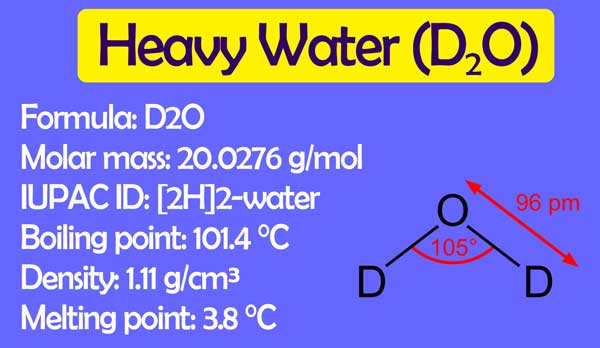 The oxide (D2O) of Deuterium is also called heavy water. About 6,000 parts of ordinary hydrogen contain about 1 part deuterium.

Harold Urey was discovered Heavy Water in 1931. For the discovery of Deuterium, Harold Urey received the Nobel Prize in 1934. It was first made by Macdonald in 1933 in the concentrate by the simple decomposition of ordinary water.

Heavy water is obtained by burning deuterium in air.

Deuterium is also obtained by an exchange reaction with ordinary water.

There are several methods of obtaining it by the electrolysis of ordinary water. In these, the method developed by Taylor, Eyring & Frost is nowadays used for heavy water industrial manufacture.

An iron vessel in the electrolytic cell used in this method acts as a cathode and the anode is made of nickel. The first is the decomposition of the N/2 solution in simple water of NaOH.

When the volume of water remains about one-fourth of the initial volume, it is distilled and mixed with NaOH in the distillate and then its concentration is again N/2. And then do the electrical decomposition.

Like ordinary water, It is also colorless, odorless, and free liquid. There is a difference between physical constants of this and light water.

Hence some of the main chemical properties are as follows.

It forms deuterium gas by reacting with sodium and other functional metals.

It reacts with acid oxides produce acids and reacts with Alkaline Oxides it makes alkali.

By reacting with nitrides, it causes heavy ammonia.

It reacts with carbides to form deuterium-containing hydrocarbon.

The exchange of unregulated hydrogen and deuterium takes place at a very slow rate. And this action requires a catalyst.

Use of Heavy Water:

In Nuclear Reactors, it is used as a moderator.

It is used to make compounds of deuterium and deuterium.

It is also used to study the processes of various reactions and processes.

Halogen Elements || Why Halogen are So Reactive || Elemental Nature