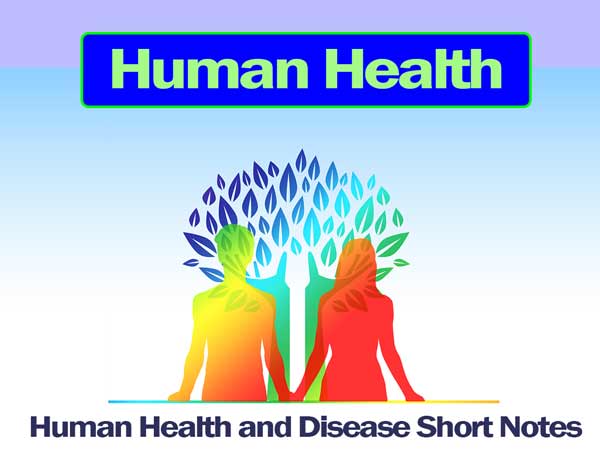 When the functioning of one or more organs or systems of the body is adversely affected, characterized by various signs and symptoms, we say that we are not healthy, i.e., we have a disease.

Malaria is caused by a digenetic (having two hosts to complete its life cycle) and triphasic (having three phases of life cycle) protozoan parasite is known as Plasmodium. Sir Ronald Ross (1897), a doctor in the Indian Army, established that the malarial parasite is transmitted by the bite of a female Anopheles mosquito for which he got Nobel Prize in 1902.

The life cycle of Plasmodium requires two hosts for completion of human and mosquito. Plasmodium enters the human body as sporozoites (infectious form) through the bite of infected female Anopheles (vector). The sporozoites reach the liver cells via blood where they initially multiply.

These then attack the RBCs resulting in their rupturing. The rupture of RBC is associated with the release of hemozoin, a toxin that causes the chill and high recurring fever every three to four days.

The female Anopheles mosquito when bites an infected human being, the malarial parasites enter into the mosquito’s body and undergo further development to form sporozoites that finally move to the salivary glands of the insect.

The bite of these mosquitoes introduces the sporozoites inside the human body, thus initiating the above mentioned cyclic process again.

The attack of malaria is preceded by tiredness, headache and muscular pain. Malaria is characterized by recurring rigors lasting 6-10 hours. There are three stages:

(i) cold stage (chill and shivering).

There are four species of Plasmodium which cause four main types of malaria in humans.

Plasmodium vivax: Causes benign tertian malaria in which fever recurs after every 48 hours.

In both disorders, the blood glucose concentration is elevated above the normal range. Glucose is excreted in the urine, excessive urination and dehydration of body tissues occur.

Cardiovascular diseases are those diseases that affect the blood vessels and heart. E.g., arteriosclerosis (hardening and loss of elasticity of arteries), atherosclerosis (development of lumpy thickness on inner walls of arteries that prevent their dilation), hypertension (high blood pressure), angina pectoris (chest pain due to sclerosis of coronary arteries) etc.

Cerebrovascular accident (CVA) or stroke is the sudden interruption of blood flow to a portion of the brain because of the block or rupture of a cerebral blood vessel. Thus the brain cells do not get oxygen and glucose. This can cause paralysis, loss of speech, etc.

Arthritis is a general term that is applied to different malfunctions of the joints. These could be osteoarthritis (progressive erosion of articular cartilage at a synovial joint), rheumatoid arthritis (inflammation of synovial membrane in synovial joints resulting in the formation of hard tissues over cartilage articulations) infectious arthritis (due to bacterial and viral infection) and gouty arthritis (accumulation of uric acid crystals in joints)

The overall ability of an organism to fight with the disease-causing organisms, conferred by the immune system is called immunity.

Lymphoid organs are those organs where the maturation and proliferation of lymphocytes takes place. The structurally and functionally diverse lymphoid organs and tissues are interconnected by the blood vessels and lymphatic vessels through which lymphocytes circulate.

The specific reactivity induced in a host by an antigenic stimulus is known as the immune response. It is of two types – primary and secondary immune responses.

The reaction of the body’s immune system to the first attack of microbes (antigens) is called a primary immune response. It takes a much longer time to develop because of the requirement of suitable receptor development.

T-lymphocytes or T-cells when triggered by antigens, produce a clone of T-cells such as:

Suppressor T-cells keep a check on the entire immune system from attacking the body’s own cells.

Memory T-cells are sensitized T-cells that retain the memory of antigen specificity for the future, sometimes lifelong.

B-lymphocytes or B-cells produce antibodies and therefore, generate antibody-mediated or humoral immunity. They give rise to the following cells:

Memory B-cells: Some of the activated B cells do not differentiate into plasma cells but rather remain dormant as memory B cells until activated once again by a renewed attack of the same antigen.

Antigen-presenting cells (APCs) are specialized cells that include macrophages, B-lymphocytes and dendritic cells (e.g., Langerhans cells of epidermis of skin). They are distinguished by two properties : (i) they express class II MHC molecules on the membrane, and (ii) they are able to deliver a costimulatory signal that is necessary for helper T cell activation.

Vaccination (L. vacca-cow) is the process of development of immunity against a particular disease by inoculation of harmless antigenic material like attenuated pathogen or its toxoid into a healthy person.

The vaccine is a suspension of killed or attenuated pathogenic microorganisms or antigenic preparations made out of it, which on administration provides immunity towards the pathogen.

Immunization is the process by which the body produces antibodies against the antigens of various diseases through the administration of specific vaccines.

Hypersensitivity or allergy is the excessive immune response to common antigens, called allergens.

Allergy is due to the release of chemicals like histamine and serotonin from the mast cells.

Autoimmunity refers to abnormal immune responses in which the immune system fails to properly distinguish between self and non-self and attacks the self-body part. Examples of autoimmune disorders are rheumatoid arthritis, insulin-dependent diabetes, chronic anemia, chronic hepatitis, Grave’s disease, etc.

AIDS or acquired immune deficiency syndrome is a deficiency of the immune system. It is accompanied by a reduction in the number of helper T cells which stimulate antibody production by B-cells resulting in loss of natural defense against viral infection.

HIV is a retrovirus that attacks helper T cells.

The virus of AIDS is transmitted by transfusion of infected blood or blood products, the use of contaminated needles and syringes to inject drugs or vaccines, sexual intercourse with an infected partner without a condom and from infected mother to child through the placenta.

No vaccine has been prepared so far against the AIDS virus.

Cancer is a disease of uncontrolled proliferation of cells without any differentiation. It commonly originates in the tissues in which the cells are regularly replaced by mitosis.

In our bodies, cell growth and differentiation are highly controlled and regulated. In cancer cells, there is a breakdown of these regulatory mechanisms. Normal cells show a property called contact inhibition, by virtue of which contact with other cells inhibits their uncontrolled growth. Cancer cells appear to have lost this property. As a result of this, cancerous cells just continue to divide giving rise to masses of cells called tumors. Tumour is of two types:

Benign tumor: This is a solid tumor that stops growing by itself and does not invade other tissues and remains confined to a particular site.

Malignant or tumor: In malignant tumors, tumor cells grow very rapidly, invading and damaging the surrounding normal tissues. Cells from such tumors reach distant sites through blood, and whenever they get lodged in the body, they start a new tumor there. This property called metastasis is the most feared property of malignant tumors.

Techniques such as radiography (use of X-rays), CT scan (computed tomography), MRI scan (magnetic resonance imaging) are very useful to detect cancers of the internal organs.

Mammography is radiographic examination of breasts for possible cancer.

Drug addiction or drug abuse is taking drugs for a purpose other than clinical use, in amount, concentration or frequency that impairs the physical, physiological and psychological functions of the body. The drugs, which are commonly abused are opioids, coca alkaloids, and cannabinoids. The majority of these are obtained from flowering plants. Some are obtained from fungi.

Tranquilizers decrease tension and anxiety and produce a feeling of calmness

An adolescent can fall easy prey to drugs, tobacco and alcohol. The various reasons are curiosity, experimentation, adventure, and excitement, group or peer pressure, feeling of independence, overcoming frustration and depression and unsupportive family structure. Effects/Symptoms of Drug Abuse

Coordination of body parts, working of nervous and muscular systems are influenced.

Effect on liver and kidneys as they become involved in the metabolism and elimination of their products. The damaged liver undergoes cirrhosis.

Taking of drugs intravenously may spread serious infections like AIDS and hepatitis B due to the sharing of infected needles and syringes.

Mental and financial distress to the entire family.

Avoid undue pressure on a child.

Teachers and parents should always be careful to look for and identify danger signs that can indicate a tendency to go in for addiction.

Psychologists, psychiatrists, deaddiction and rehabilitation specialists are available to help individuals who fall in the trap of drug, tobacco or alcohol abuse.

Download the Short Notes of Human Health and Disease: class 12