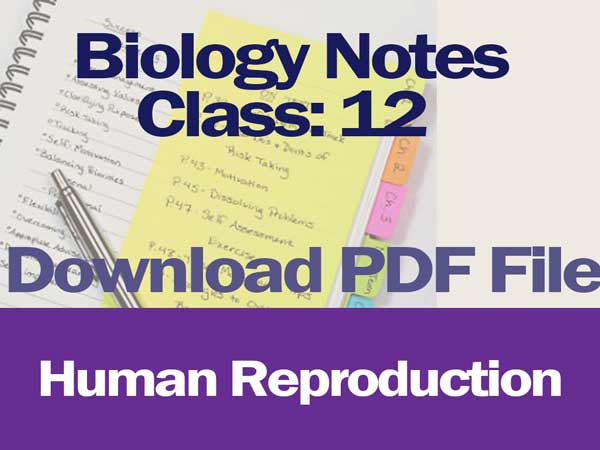 Human Reproduction: The reproductive system is a collection of internal and external organs in both males and females that work together for the purpose of producing a new generation of living organisms similar to their parents.

Human beings reproduce sexually and are viviparous i.e., they give birth to young ones.

These sex cells or gametes are formed in separate, paired organs of mesodermal origin, called gonads.

Secondary sex characters are external features which provide distinctiveness to the two sexes.

They have no direct role in the sexual reproduction phenomenon when male and female individuals are differentiated externally is called sexual dimorphism.

Puberty is the period when primary sex organs become functional and start secreting sex hormones which bring about the development of secondary sex organs and the appearance of secondary sex characters. These changes occur in response to rising levels of gonadal hormones. It occurs approximately between 10 and 15 years in both males and females.

Adolescence is the period between puberty to complete sexual maturity. Generally, it is considered to start with the development of secondary sexual characteristics and ends when the physical growth of the body slows down. In humans, age 11 to 20 years for boys and 10 to 18 years for girls is the adolescence period.

The male reproductive system is located in the pelvic region. It includes a pair of testes along with accessory ducts, glands, and the external genitalia.

Testes are paired structures that lie outside the abdominal cavity in a thin pouch of skin called the scrotum. The scrotum helps in maintaining the low temperature of the testes (2–2.5°C lower than the normal internal body temperature) necessary for spermatogenesis.

Each testis has about 250 testicular lobules, each containing 1 to 3 highly coiled seminiferous tubules. Wall of each seminiferous tubule is formed of a single-layered germinal epithelium and few tall Sertoli or sustentacular cells are also present. Sertoli cells provide nutrition to the developing sperms. In between the seminiferous tubules, interstitial or Leydig’s cells are present which secrete androgens i.e., male sex hormones (e.g., testosterone).

The seminiferous tubules are closed at one end but on the other side, they join to form a network, the rete testis, from where fine ciliated ductules, the vasa efferentia arise. The vasa efferentia leave the testis and open into epididymis located along the posterior surface of each testis. Vas deferens is connected with epididymis at the tail end. The union of the canals from seminal vesicles and vas deferens forms the ejaculatory duct.

Rete testis, vasa efferentia, epididymes and vasa deferentia (or vas deferens) are called the male accessory ducts. These ducts store and transport the sperms from the testis to the outside through urethra.

The penis is a cylindrical and highly vascularised copulatory organ. The enlarged end of the penis, called the glans penis, is covered by a loose fold of the skin called prepuce or foreskin.

Semen is a collection of secretion from the epididymis, seminal vesicles, prostate glands and Cowper’s gland.

The female reproductive system consists of a pair of ovaries, a pair of Fallopian tubes (oviducts), uterus, vagina, external genitalia (vulva) and breasts. A pair of breasts (mammary glands) are present for child care.

The two ovaries are small bodies each 2 to 4 cm in length which remain attached to the abdominal wall by an ovarian ligament called mesovarium (or fold of peritoneum).

It is covered by a layer of cubical epithelium called the germinal epithelium and under it is ovarian stroma.

Each Fallopian tube is about 10 to 12 cm long muscular tube. It conveys the egg from the ovary to the uterus, and also provides the appropriate environment for its fertilisation. The oviduct consist of 3 regions–infundibulum, ampulla and isthmus. Infundibulum is the broad, funnel-shaped proximal part lying closer to the ovary. Its margin bears motile, finger-like processes called fimbriae which help in the collection of the ovum after ovulation. Ampulla is the widest and longest part of the oviduct.

Isthmus is a very short, narrow, thick-walled, straight part that follows the ampulla.

The uterus (womb) is a large, highly elastic medium specialized for the development of the embryo. Its shape is like an inverted pear.

It is attached to the body wall by a double fold of peritoneum, the mesometrium (broad ligament). The uterus has a thick, highly vascular wall composed of three tissues: outer peritoneal covering called perimetrium, middle smooth muscle layer termed myometrium and inner mucous membrane known as the endometrium.

The uterus opens into the vagina through a narrow cervix. The cavity of the cervix is called cervical canal.

The sides of the vulva have two small fleshy folds, the labia minora (lesser lips) which are surrounded by larger hairy folds called the labia majora (greater lips). A fleshy elevation above the labia majora is known as mons pubis. In the uppermost angle of the vulva, in front of the urethral opening, is located a small erectile clitoris which is highly sensitive as it contains numerous sensory nerve endings for touch and pressure.

Mammary glands are modified sweat glands that lie over the pectoralis major muscle. Externally, each breast has a projection, the nipple, surrounded by a circular pigmented area of skin (deep pink to light brown) called the areola. The glandular tissue comprises about 15-20 mammary lobes in each breast. Each lobe is made up of a number of lobules.

Each lactiferous duct typically carries milk from one of the lobes to the exterior.

Gametogenesis is the process by which male and female sex cells or gametes i.e., sperm and ova are formed respectively in the male and female gonads (testes and ovaries). It is the major reproductive event in sexual reproduction.

Gametogenesis for the formation of sperms is termed spermatogenesis while that of ova is called oogenesis.

Spermiogenesis is the transformation of the spermatids into spermatozoa (sperms).

Spermiation is the process of release of sperms from the Sertoli cell.

Ovulation is the release of secondary oocyte, after puberty, once every month from Graafian follicle, by one of the ovary.

A brief account of gametogenesis is given on the next page.

The menstrual cycle is the cyclic change in the reproductive tract of primate females. The reproductive period of the human female continues from about the age of about 12-15 years to 45-55 years.

First menstruation begins at puberty and is called menarch. Menopause is a phase in a woman’s life when ovulation and menstruation stop. It occurs between 45 to 55 years of age.

The period of a menstrual cycle is counted from the day of the onset of the flow to the next onset after 28 days. This period is divided into four main phases explained in the table given below.

Potassium Cyanide Formula || What does Cyanide do to the body?

DDT full Form || What was DDT used for? || Is DDT harmful to humans?