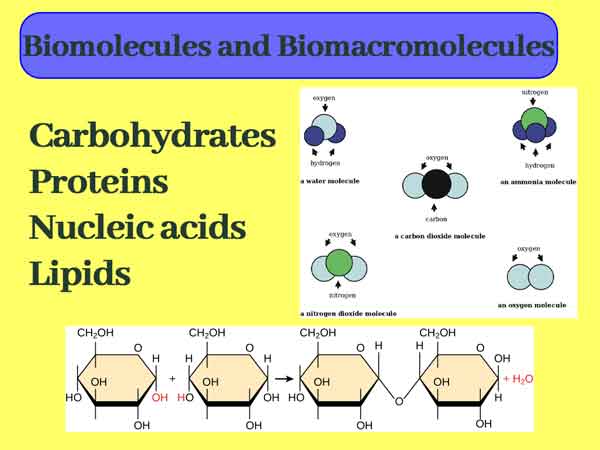 Biomolecules are organic molecules that are essential to life. They can be divided into four main classes:

Carbohydrates: simple or complex sugars that provide energy and serve as structural components of cells.

Proteins: complex molecules made of chains of amino acids, involved in structure, regulation, and catalysis of cellular processes.

Nucleic acids: DNA and RNA, which store and transfer genetic information and are involved in protein synthesis.

These biomolecules interact and work together to perform life processes such as metabolism, growth, and reproduction.

Biomolecules refer to all kinds of molecules peculiar to living organisms. They are all organic matter. Typical cells contain 10,000 to 100,000 kinds of biomolecules, of which nearly half are small molecules, and the molecular weight is generally below 500.

It is estimated that there are 10-10 types of protein alone. Biomolecules are in order. Each biomolecule has its own structural characteristics. All biomolecules exist in the life system with a certain order (organization).

Most of the biological macromolecules are formed by the aggregation of simple composition structures. The constituent units of proteins are amino acids and the constituent units of nucleic acids are nucleotides … Amino acids and fatty acids are called biological single molecules, which are closely related to life. They are the basic substances that makeup macromolecules.

Common biological macromolecules include proteins, nucleic acids, and polysaccharides. This definition is only conceptual, opposite biomacromolecule is a small molecule material (carbon dioxide, methane, etc.) and inorganic matter.

In primitive Earth conditions, there are two paths to achieve dehydration condensation to form a polymer, one is by heating, the low relative molecular mass and dehydrating and heating the polymeric material constituting, the other is the use of the presence on primitive earth dehydration Agent to condense. The former is often performed in a near-water volcanic environment, while the latter can be performed in a water environment.

The complex structure of these biological macromolecules determines their special properties, and their movements and changes in the body reflect important life functions. Such as metabolism to supply the energy and materials needed to sustain life, transfer genetic information, control embryo differentiation, promote growth and development, and generate immune functions.

Since the 1830s, when the cytology was established, some people have studied proteins. The naming of proteins began in 1836. At that time, the famous Swedish chemist J. Berzelius and the Dutch chemist G. Mulder who was studying egg protein compounds proposed the use of “proteins”.

German organic chemist Fisher (E. Fischer ) cooperated with others to put forward the argument that peptide bonds between amino acids are connected to form proteins. In 1907, Fisher synthesized a 15 glycine and 3 leucine Consists of a long chain of 18 peptides.

At the same time, Bernard (J.D. Bernal) and Astbury (W.T. Astbury) in the British crystal analysis school have used X-ray diffraction analysis to analyze the structure of proteins such as wool and hair, which prove that they are folded Curly fibrous substance. With the deepening of research, scientists have figured out that protein is the main component of muscle, blood, hair and so on, and has multiple functions.

Nucleic acids were discovered much later than proteins. A 24-year-old Swiss chemist, F. Miescher, who worked in Germany in 1868, extracted what was then called “nuclear material” from a patient’s wound pus cells.

Nucleotides are made up of bases, ribose, and phosphate. There are 4 types of bases (adenine, guanine, cytosine, and thymine), and 2 types of ribose (ie, ribose and deoxyribose). According to this, nucleic acids are divided into two categories: Ribonucleic Acid (RNA) and Deoxyribonucleic Acid (DNA).

Although nucleic acid was found in the nucleus at that time because its structure is too simple. It is difficult to imagine what role it can play in abnormally complicated genetic changes. Some scientists even thought that after the structure of the protein was clarified at that time. It was likely that the protein played a major role in heredity.

The elaboration of the enzyme began in 1897 when the German chemist E. Buchner extracted fermented yeast cells from ground yeast cells to ferment alcohol. According to Buschner’s research, enzymes extracted from the living body can work just as well.

It not only hit the popular theory of vitality at that time but also brought biochemical research into the stage of understanding chemical changes in cells. Later, the British biochemist Harden (A. Harden) and much other research on the specific chemical steps of alcohol fermentation.

In the 1920s, a large number of experimental results showed that the two processes of yeast fermenting sugar to produce alcohol and muscle contracting to turn sugar into lactic acid are basically the same, also known as glycolysis.

By the research of many scientists in the 1930s, and finally integrated by German biochemist H.A. Krebs, a tricarboxylic acid cycle in which CO2 and H2O and energy (ATP) were finally produced by biological respiration was proposed. During this period, many scientists studied the metabolism of fats and amino acids, as well as the mutual conversion of sugars, fats, and proteins in metabolism and their biosynthesis.

These processes are all catalyzed by enzymes.

The role of inorganic substances and biological macromolecules

For example, some metal chlorides and gluconates can activate and inhibit glucose oxidase activity. The role of metal ions and their complexes with proteins mainly includes conformational changes caused by metal binding, subsequent biological effects caused by association and assembly.

The study of metal ions and their interaction with DNA can help people understand the nature of life phenomena at the molecular level, and provide theoretical guidance for the rational design and search for effective therapeutic drugs.