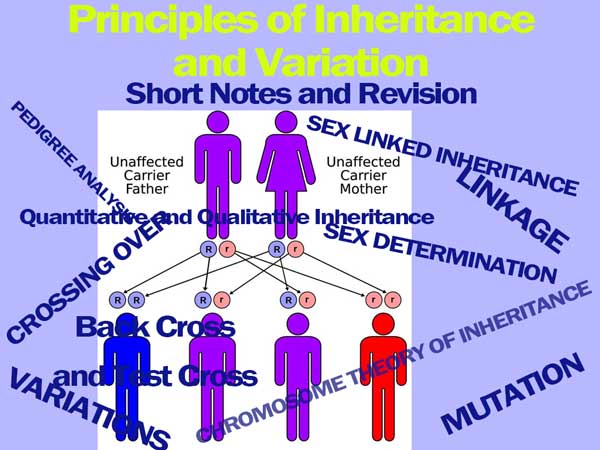 Inheritance and Variation: Genetics is a branch of biology that deals with the study of heredity and variations. Heredity is the study of the transmission of characters from parents to offspring or from one generation to the next.

The characters that are passed from one generation to the next are called hereditary characters. Variations may be defined as the differences in characteristics shown by the individuals of a species and also by the offspring or siblings of the same parents.

Gregor Johann Mendel (1822-84) is called the Father of Genetics because he was the first to work out the patterns of heredity by performing experiments on garden pea plant (Pisum sativum).

Character is a well-defined morphological or physiological feature of an organism, for example, plant height.

The trait is the distinguishing feature of a character, for example, tallness or dwarfness.

Gene is the unit of genetic information that determines the biological character of an organism.

Allelomorphs or alleles refer to the two Mendelian factors which occur on the same locus on the two homologous chromosomes of an individual and control the expression of a character e.g., T and t, Y and y, R and r are pairs of alleles.

The term allele was given by W. Bateson.

The dominant allele is one of the factors of an allelic pair that can express itself whether present in the homozygous or heterozygous state, e.g., T (tallness in pea), R (round seed in pea).

The recessive allele is the factor of an allelic pair that is unable to express its effect in the presence of its contrasting alternative form in a heterozygote, e.g., t in Tt.

The diploid condition in which the alleles at a given locus are identical is called homozygous or pure, e.g., TT or tt.

An organism containing two different alleles or individuals containing both dominant and recessive genes of an allelic pair, e.g., Tt, is known as heterozygous or hybrid.

When only one allelic pair is considered in cross-breeding, it is called a monohybrid cross.

When two allelic pairs are considered for crossing, it is called dihybrid cross.

When there is the involvement of more than two allelic pairs across it is called poly hybrid cross.

Hybrid vigour or heterosis is the superiority of hybrid over either of its parents in one or more traits.

The genotype is the gene complement or genetic constitution of an individual with regard to one or more characters irrespective of whether the genes are expressed or not.

Phenotype is the observable characteristic of an organism which is determined by its genes.

The portion or region on chromosome representing a single gene is called gene locus.

The aggregate of all genes and their alleles present in an interbreeding population is known as the gene pool.

Pure line or pure breeding line is a strain of individuals homozygous for all genes considered. The term was coined by Johannsen.

Punnett square is a checkerboard which was devised by R.C. Punnett and used to show the result of a cross between two organisms.

Genome is a constitution of all the genes contained in a single set of chromosomes, i.e., in a haploid nucleus. Each parent, through its reproductive cells, contributes its genome to its offspring. A single genome is present in haploid cells, two in diploid cells and many in polyploidy cells.

Back Cross and Test Cross

A cross of F1 hybrid with either of the two homozygous parents is known as back cross.

While both the crosses are known as a back cross, the second one is specified as a test cross. It is called so because it can be used to test the genotype of a dominant phenotype. If the dominant individual is pure (homozygous) it will produce only the dominant trait in progeny.

Variations are differences found in morphological, physiological, cytological and behavioural traits of individuals belonging to the same species, race and family. Hereditary variations are transmitted from generation to generation whereas environmental variations are temporary and do not relate with the last or next generation.

The chromosome theory of inheritance states that the Mendelian factors or genes are located at specific loci on the chromosomes, and it is the chromosomes that segregate and assort independently during meiosis and recombine at the time of fertilization in the zygote.

Salient features of this theory are:

Bridge between one generation and the next is through sperm and ovum. The two must carry all the hereditary characters. Both the sperm and egg contribute equally to the heredity of the offspring.

Nucleus contains chromosomes. Therefore, chromosomes must carry the hereditary traits. Every chromosome or chromosome pair has a definite role in the development of an individual.

The chromosomes retain their number, structure and individuality throughout the life of an organism and from generation to generation. The two neither get lost nor mixed up. They behave as units.

Both chromosomes, as well as genes, occur in pairs in the somatic or diploid cells. A gamete contains only one chromosome of a type and only one of the two alleles of a trait.

Linkage is the phenomenon of certain genes staying together and their inheritance from generation to generation without any change or separation due to their presence on the same chromosome. T. H. Morgan (1910) proved and defined linkage on the basis of his breeding experiments on fruit-fly, Drosophila melanogaster.

It results in new combinations of genes that are different from parents thus introduces variations. The variations are helpful in the struggle for existence and adaptability to changes in the environment. Useful recombinations are picked up by breeders for the development of improved varieties. The frequency of crossing over is used for building linkage maps or chromosome maps.

Sex determination is the method by which the distinction between males and females is established in a species.

Sex-linked inheritance is the transmission of characters and their determining genes along with sex-determining genes present on the sex chromosomes, X and Y which are inherited together from one generation to the next. X-linked traits are more apparent in males than in females. Females generally function as carriers of X-linked disorders because recessive genes can express themselves in females only in the homozygous state. E.g., color blindness, hemophilia etc.

X-linked traits follow the pattern of crisscross inheritance where a parent passes the traits to the grandchild of the same sex through offspring of the opposite sex, that is, the father passes the traits to grandson through his daughter while the mother transfers traits to her granddaughter through her son.

The mutation is the sudden inheritable discontinuous variation that appears in an organism due to permanent changes in their genotypes. The term mutation was coined by Hugo de Vries (1901).

Pedigree is a chart showing a record of inheritance of certain traits for two or more ancestral generations of human beings or domesticated animals in the form of a diagram of family tree. Pedigree analysis is a system of analysis by following the movement and distribution of certain genetic traits. This system has the following conventions:

Pedigree analysis is useful in many ways like it helps to fill up the possible genotypes by knowing the phenotypes only. It helps to study the pattern of inheritance of a dominant or a recessive trait. The possible genetic makeup of a person for a trait can also be known with the help of pedigree.

Download the file of Principles of Inheritance and Variation short notes:

Noble gases || What are the properties of noble gases?