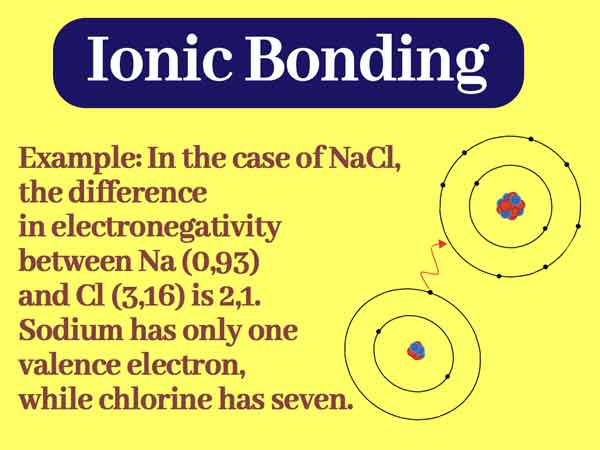 Ionic bonds are formed when two or more atoms or chemical groups lose or gain electrons and become ions. There are electrostatic interactions between oppositely charged ions.

When the effect reaches equilibrium, an ionic bond is formed. Therefore, an ionic bond refers to a chemical bond formed between anions and cations through electrostatic interaction.

Ionic bonds, also known as salt bonds, are a type of chemical bond that is formed after two or more atoms or chemical groups lose or gain electrons and become ions. There is an electrostatic attraction between oppositely charged atoms or groups.

Such chemical bonds are often formed between metals and non- metals. Atoms that lose electrons are often atoms of metal elements, while atoms that acquire electrons are often atoms of nonmetallic elements. Ions with opposite charges are attracted to each other by electromagnetic force, thereby forming a chemical bond. Ionomer more hydrogen bond strength, and the strength thereof covalently close.

The nature of the bond: electrostatic interaction between anions and cations;

Electronic formula: “·” or “×” around the element symbol to represent the outermost electron of the atom.

The ionic bond has a strong force, no saturation, and no directivity.

Whether the anions and cations are neutralized

Some people may ask, are the anions and cations combined, and are the charges neutralized? In addition to the electrostatic attraction between sodium ions and chloride ions, there is also the mutual repulsion between electrons and electrons, atomic nuclei and nuclei. When the two ions approach a certain distance, the equilibrium between attraction and repulsion is reached, so a stable chemical bond is formed between anions and cations. Therefore, the so-called anion and cation charges do not neutralize each other.

The lattice energy can be calculated by the Bōrn-Haber cycle or the Bōrn-Landé formula, or it can be measured by experimental measurements

Ions may be either single ions, such as of Na +, CI –; may also be a radical formed.

When metals such as potassium, sodium, and calcium are combined with nonmetals such as chlorine and bromine, they can form ionic bonds. And only when the overall energy level drops, the reaction occurs (atoms connected by chemical bonds have lower energy levels than free atoms). The more the drop, the stronger the bond formed.

In reality, “pure” ionic bonds do not form between atoms. All bonds are more or less covalently bonded. The higher the electrical average between the bonding atoms, the lower the ionic bond component.

In ionic bonding, because the outer electrons of the ions are relatively tightly bound, the energy of visible light is generally not enough to cause them to be excited, so they do not absorb visible light, so typical ionic crystals are colorless and transparent. Compounds such as Al2O3, MgO, TiO2 and NaCl are all ionic bonds.

The latter gains electrons and becomes negatively charged full-shell anions. Positive ions and negative ions are attracted to each other by electrostatic attraction; at the same time, repulsion occurs when they are very close, and the stable ionic bond is formed when the attraction and repulsion are equal.

Research suggests that atoms in molecules or crystals are not simply piled together, but that there is a strong interaction. Chemically, this kind of strong force between atoms in a molecule or crystal (sometimes the atoms gain and lose electrons into ions) is called a chemical bond. The essence of a bond is a force. So some are called key force, or just key.

Take sodium and chloride to form sodium chloride as an example:

The chlorine atom gets the electron lost by sodium and becomes a negatively charged chloride ion. with nuclei, between the electronic repulsion effect equilibrium, the formation of a stable ionic bond.