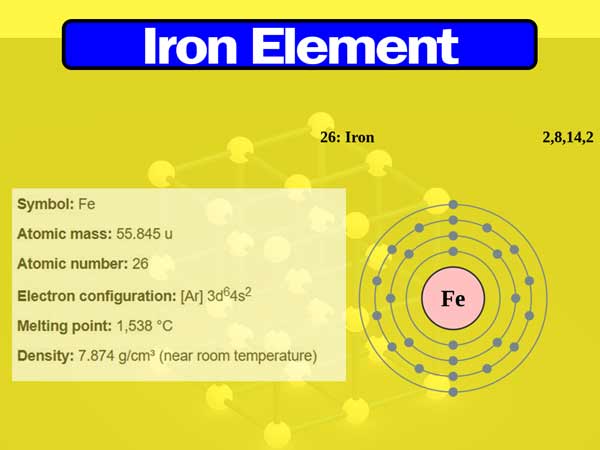 Iron (iron) is a metal element. The iron atomic number is 26. Fe is the chemical formula of iron. Pure iron is white or silver-white with a metallic luster.

Iron is widely distributed in life, accounting for 4.75% of the crust content, second only to oxygen, silicon, and aluminum, and ranks fourth in the crust content. Pure iron is a flexible and malleable silver-white metal. It is used to make iron cores for generators and motors. Iron and its compounds are also used to make magnets, drugs, inks, pigments, abrasives, etc. One of the “ferrous metals”.

In addition, the human body also contains iron, and the ferrous ion of +2 is an important component of hemoglobin, which is used for the transportation of oxygen.

The main iron ore used is:

Appearance and shape: Pure iron is a metallic crystal with a silver-white metallic luster, and is usually gray to gray-black high-purity iron wire color amorphous fine particles or powder.

Pure iron is soft, but if it is an alloy of iron with other metals or iron-doped with impurities, usually the melting point decreases and the hardness increases.

Iron is an indispensable metal in the industrial sector. Iron and a small amount of carbon are made into an alloy – steel, which is not easy to be demagnetized after magnetization. It is an excellent hard magnetic material, and it is also an important industrial material. There are many allotropes of iron.

Iron is a more reactive metal, the metal active sequence table in the front row of hydrogen, the chemical nature of the lively, is a good reducing agent. Iron cannot burn in air, but it can burn violently in oxygen.

Iron is a valence element. The valence of 0 is only reducing, the valence of +6 is oxidizing, and the valences of +2 and +3 are both reducing and oxidizing. In the displacement reaction, it is generally +2 valence, but a few are +3 valence, such as the reaction of ferrous bromide and excess chlorine:

At room temperature, iron does not easily react with non-metallic elements such as oxygen, sulfur, and chlorine in dry air. If there are impurities, it is easy to rust in humid air, it grows in wet air in the presence of acid, alkali or salt solutions.

Rust is faster. At high temperatures, a violent reaction occurs, such as the burning of iron in oxygen to form Fe3O4, and the red hot iron reacts with water vapor to form Fe3O4.

When heated, it can combine with halogen, sulfur, silicon, carbon, phosphorus and so on. In addition to +2 and +3 valence oxides, a complex oxide Fe3O4 is also formed.

When heated, iron can react with concentrated sulfuric acid or concentrated nitric acid to form a + 3-valent iron salt, and at the same time generate SO2 or NO2.

Combustion of iron wire in oxygen:

At high temperatures, iron burns in pure oxygen react violently and radiate from Mars to form Fe3O4. Fe3O4 can be regarded as FeO·Fe2O3. (It should be noted that the reason why iron burns Martian radiation in oxygen is that iron wire usually contains a small amount of carbon, and pure iron combustion will hardly have Martian radiation.) Reaction equation:

2. Iron reacts with the acid

The reaction of iron with non-oxidizing dilute acid (displacement reaction)

3. The reaction of iron with salt

(Principle of wet copper smelting) This experiment shows that iron has more metal mobility than copper.

Example: A chemical reaction between iron and chlorine:

6. Reaction with water should

For example, Phen is phenanthroline, and the coordination number is usually 6. Zero valent iron can also form various carbonyl irons with carbon monoxide, such as Fe(CO)5, Fe2(CO)9, Fe3(CO)12. Iron carbonyl is volatile and vapor is highly toxic. Iron also has +4, +5, +6 valence compounds, but only +6 (FeO4 2- ) in aqueous solution.

Iron deficiency anemia is one of the four major nutritional deficiencies identified by the World Health Organization.

In one month, women lose about twice as much iron as men (men’s food); copper, cobalt, manganese, and vitamin C are needed to absorb iron.

What is Deuterium or Heavy Water? How to make Deuterium?