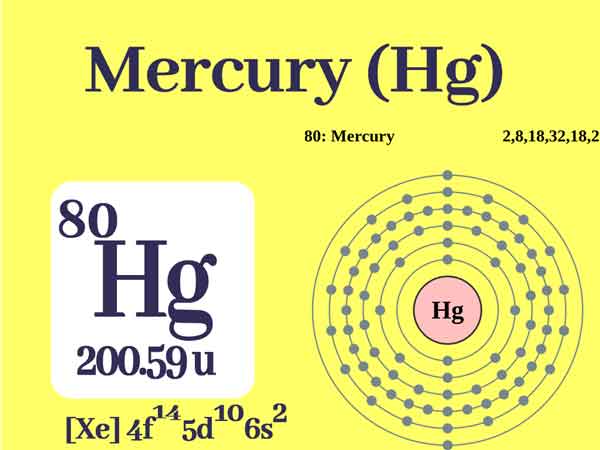 Mercury is a chemical element and it is 80th in the periodic table. Commonly known as mercury. There are also other names such as “white magpie, maidservant, magpie, magic glue, yuanshui, lead essence, flowing beads, yuan beads, red mercury, sand mercury, spiritual fluid, living treasure, Ziming” and so on.

The element symbol Hg, which is located in the sixth period of the chemical element periodic table, group IIB, is the only metal that exists in liquid state at normal temperature and pressure (in the strict sense, gallium (symbol Ga, element 31)) and cesium ( Symbol Cs, element 55) is also liquid at room temperature (29.76°C and 28.44°C).

Mercury is a silvery-white shiny heavy liquid with stable chemical properties. It is insoluble in acids and alkalis. Mercury evaporates at room temperature, and most of the mercury vapor and mercury compounds are highly toxic (chronic).

Mercury has a long history of use and a wide range of uses. In the medieval alchemy, it was called the sacred three elements of alchemy with sulfur and salt.

It is the only metal that exists in a liquid state at normal temperature and pressure. Melting point -38.87 ° C, boiling point 356.6°C, density 13.59g/cm3. Strong cohesion, stable in the air, mercury vapor evaporated at room temperature, the vapor is highly toxic.

Natural mercury is a mixture of seven isotopes of mercury. Mercury is slightly soluble in water and its solubility increases in the presence of air. Mercury is ubiquitous in nature. Trace amounts of mercury are found in animals and plants.

Therefore, trace amounts of mercury are present in our food and can be metabolized through excretion and hair.

Alloys: Mercury easily forms alloys with most common metals. These alloys are collectively called amalgam (or amalgam ). Metals that can be alloyed with mercury include gold and silver, but do not include iron, so the iron powder has been used to replace mercury.

Some other transition metals in the first row are difficult to form alloys but do not include manganese, copper, and zinc. Other elements that do not easily alloy with mercury are platinum and some other metals.

Sodium amalgam is a reducing agent commonly used in organic synthesis and is also used in high-pressure sodium lamps. When mercury and aluminum are in contact with pure metal, they are liable to form an aluminum amalgam, because aluminum amalgam can damage the oxide layer that prevents further oxidation of metal aluminum ( brush test ), so even small amounts of mercury can severely corrode metal aluminum.

For this reason, in most cases, mercury cannot be carried on the aircraft because it can easily form alloys with exposed aluminum parts on the aircraft and cause danger.

Liquid: Mercury, as a metal, bizarrely exists in liquid form at room temperature. The theory of relativity contraction can provide an explanation for this unusual phenomenon. Similar to gold, the 6s orbital of mercury shrinks and stabilizes at the same time, leading to a so-called “inert electron pair” effect: the 6s2 shell of mercury is inert during the bonding process.

Here you can see again that it is the relativistic shrinkage effect that makes the full 6s2 shell stable and stable, so the 6s2 6p energy interval of mercury suddenly increases. As long as the required excitation energy is not obtained, strong bonds cannot be formed between the mercury atoms with an inert 6s2 shell.

The ground state Hg2 is only maintained by van der Waals forces, so metallic mercury is liquid at normal temperature.

It dissolves in nitric acid and hot concentrated sulfuric acid and generates mercury nitrate and mercury sulfate, respectively. Mercury salts appear in excess of mercury. It can dissolve many metals and form alloys, which are called amalgam.

The valence is +1 and +2. Like silver, mercury can also react with hydrogen sulfide in the air. Mercury has a constant volume expansion coefficient, its metal activity is lower than zinc and cadmium, and it cannot replace hydrogen from acid solutions.

In nature, mercury mostly exists as a compound, mercury is copper and sulfur, so most of the mercury is distributed in the form of mercury sulfide (cinnabar). In ancient times, people have mastered the method of extracting mercury from cinnabar, that is, calcining in the air, collecting evaporated mercury vapor and condensing the obtained metal mercury.

Cinnamon is heated in an air stream, and the resulting vapor is condensed to obtain mercury.

It is obtained by roasting cinnabar in air or co-heating with quicklime.

The most common applications of mercury are in the manufacture of industrial chemicals and their use in electronic or electrical products. Mercury is also used in thermometers, especially those that measure high temperatures.

More and more gaseous mercury is still used in the manufacture of fluorescent lamps, and many other applications have been gradually phased out due to health and safety issues, and replaced by the less toxic but much more expensive Galinstan alloy. In addition, the uses of mercury are:

Since gold can be broken down from its minerals, it is often used in gold ores.

Instruments such as barometers and diffusion pumps.

The triple point is -38.8344°C, which is a standard point for temperature.

Used to make liquid mirror telescopes. The telescope that uses the rotation to make the liquid form a parabolic shape, and uses it as the main mirror for astronomical observation, is one-third the price of an ordinary telescope.

Other uses: Mercury switches, pesticides, in the production of chlorine and potassium hydroxide, preservatives, used as electrodes, batteries and catalysts in some electrolytic equipment.

Thimerosal is an organic preservative used in vaccines, although its use has been banned. Another mercury compound, mercury bromide red, is a topical disinfectant for micro-incisions and surface wounds; it is still used in some countries.

Thiomersal is widely used in the manufacture of eyebrow creams. In 2008, Minnesota became the first state in the United States to ban the addition of mercury to cosmetics.

It should be noted that the ingestion of trace amounts of liquid mercury generally does not cause severe poisoning reactions (there is information that it will form organic compounds in living organisms) but mercury vapor and mercury salts (except for some very low solubility such as sulfur Mercury) are highly toxic and can cause brain and liver damage when taken orally, inhaled, or in contact.  Mercury Toxicity

The thermometer is generally used to replace mercury with alcohol. The thermometers used in the People’s Republic of China (excluding Hong Kong, Macao and Taiwan) are still using mercury.

Mercury can accumulate in living organisms and is easily absorbed by the skin as well as the respiratory and digestive tracts. Minamata disease is a type of mercury poisoning.

Mercury damages the central nervous system and has adverse effects on the mouth, mucous membranes and teeth. Prolonged exposure to high mercury can cause brain damage and death. Despite the high boiling point of mercury, the saturated mercury vapor at room temperature has reached several times the toxic dose.