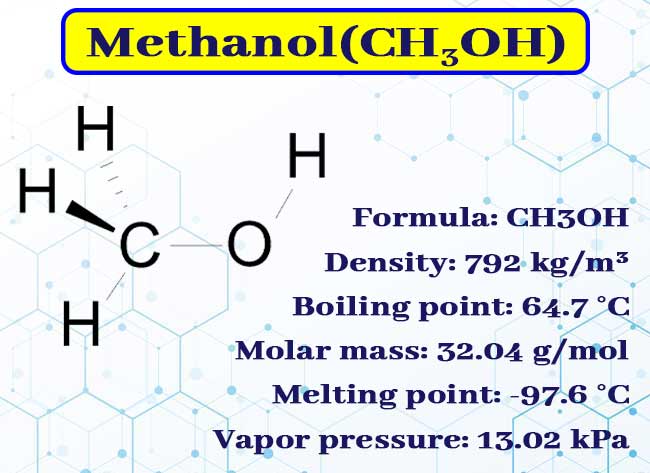 It is the first member of the alcohol category. It was first obtained by Boyle in 1631 from a distillery of wood. It is found as an ester called methyl salicylate in wintergreen oil and methyl althronilet in jasmine oil. 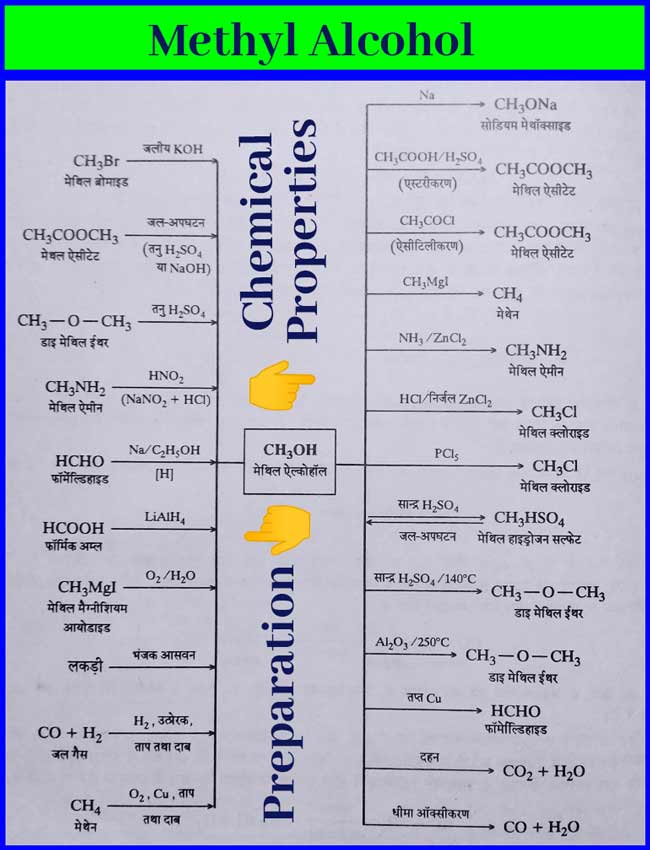 By Destructive Distillation of Wood: In this method, small pieces of dry wood are filled in a netted car and placed in an iron retort. It is heated to about 500° C in the absence of air. This action is called fractional distillation. Consequently, the vapor obtained flows into the capacitor.

The following substances are obtained by distillation of wood.

Wood Gas: This gas is a mixture of flammable gases. This mixture of gases is not liquefied in the capacitor. It mainly contains hydrogen (H2), Carbon mono-oxide (CO) and methane (CH4) gases.

It also contains ethane, ethane, and ethyne gases in small amounts. Their main use is as fuel. This gas can also be used to heat the retort used in this method. 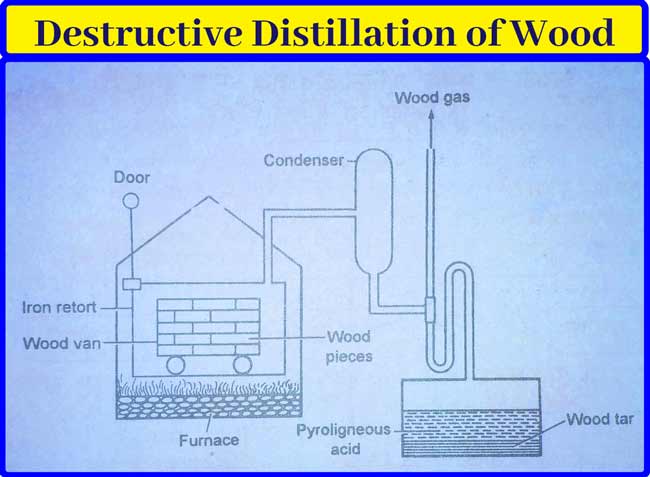 Liquid distillate: The fluid obtained from the capacitor is collected in a very large pool. When stable, this fluid is divided into two layers –

Bottom surface- This bottom has a dark colored substance called Wood tar or wood coal tar. It contains many substances of the Phenol class.

Wood Charcoal: The wood charcoal remaining in the retort is used as fuel.

Obtaining methanol fromPyroligneous Acid: Heat Pyroligneous Acid in a round bottom flask. And the vapors obtained from it flow in hot water. Here the vapor of acetic acid reacts with water to form calcium acitate. The vapor of methenol and acetate liquefies and collects in water.

Calcium Acetate is purified by crystallization and distilled with sulfuric acid to obtain acetic acid. 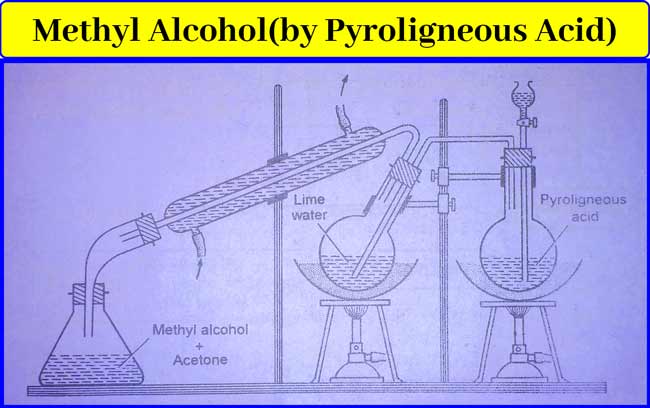 The mixture of methynol and acetone is separated by efficient distillation. Acetone and methynol are distilled at different temperatures. The main impurity in methanol from distillation is acetone. It is called wood spirit.

Pure methanol is obtained by distilling the methanol thus obtained, without being extinguished.

Methanol is separated after boiling them with caustic potash. The methanol thus obtained is dried by distillation at a quick lime and distillation gives the pure methanol.

The above method of manufacture of methanol is very old and uneconomical, which is not used nowadays. Modern methods of its industrial construction are synthetic. The following are the major methods of its synthesis –

From Water Gas: In this method, water gas is first obtained by flowing steam on red-hot coke.

Water gas flows at 3000-4000 pound per square inch or 200-300 atmospheric pressure with hydrogen over a catalyst(Zinc, Copper and Chromium oxide) heated to 275-375° temperature.

In this process, the unused gas is again flowed over the catalyst. The methanol yield of this method is up to 99-100%.

Synthesis gas can also be taken in place of water gas, the initial substance used in this reaction. The difference between these two starting substances to form methanol is that hydrogen has to be added to the water gas, while the synthesis gas already contains hydrogen excess and remains unused at the end of the reaction.

From Natural Gas: Natural Gas contains 80-90% methane. The industrial manufacture of methyl alcohol is also made from methane derived from natural gas. Partial oxidation of methane and methanol is achieved by mixing methane and oxygen in a ratio of 9: 1 to 100 atmospheric pressure and heating at 200° C in a hot copper tube.

Methanol(CH3OH) is a colorless and characteristic smelling liquid.

It is completely miscible in water. After dissolving it in water, the volume of the solution decreases.

It is a good solvent for fat, leather and oil.

It is flammable. Its vapor forms explosive mixtures with air or oxygen. Its boiling point is 64C.

It is a toxic fluid. By drinking this, a person goes mad or becomes blind and death can also occur.

It is used as solvent of paint, lacquer, varnish gum celluloid etc.

It is used to make formaldehyde in greater quantity.

It is used as a cooling antifreeze in automobile radiators.

It is also used as a fuel for moter car by mixing in patrol.

If organic compounds are liquid, a gas (hydrogen) is obtained in the form of bubbles by pouring a piece of sodium into it.

On heating methanol with a few drops of salicylic acid and concentrated sulfuric acid, methyl salicylate is formed and thus gives an odor like wintergreen oil or iodex.

By taking a little methanol in a test tube and dipping a wire of red hot copper in it, formaldehyde is formed and due to this there is a pungent smell.

It does not provide iodoform testing.

Method of Preparation of Microcosmic Salt