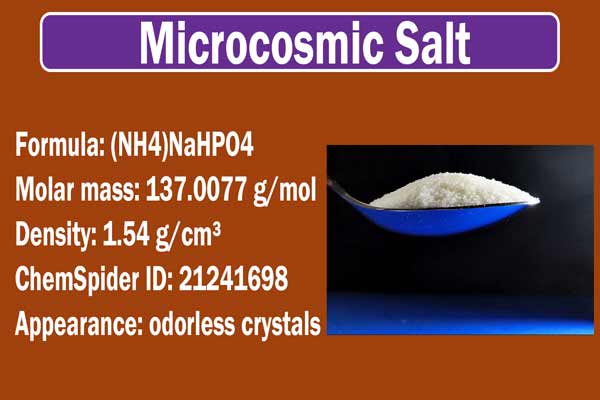 It is made up of two levels.

Disodium phosphate and ammonia chloride are mixed with crystals of micros on mixing and cooling their hot solutions according to equal amounts of their gram weight.

Crystals of microcosmic salts are obtained after cooling by mixing 5 parts of disodium phosphate and two parts of ammonia sulfate by making a hot solution.

It is a colorless crystalline solid substance. It dissolves in water.

Effects of heat: On heating microcosmic salt, ammonia gas is released and sodium meta-phosphate is formed, which is transparent.

Sodium forms colored orthophosphates by coinciding with metal oxidation at high temperatures. Due to this property, it is used in qualitative analysis to test metallic roots.

Similarly, other types of the bead are made. Whose colors are of different types. These colors can be identified to ashes.

Oxygen Atom and Oxygen Isotopes || Why Oxygen is Important and Uses