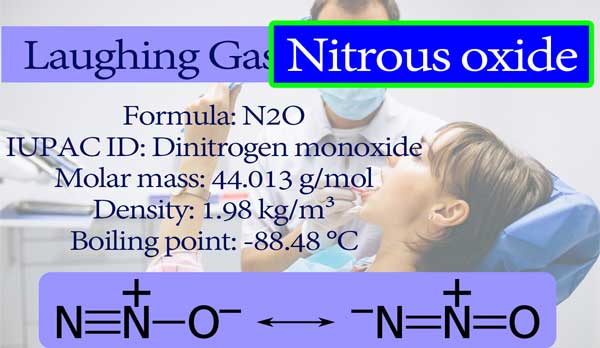 Priestley first made nitrous oxide gas in 1772 and Devi studied its properties. Smelling this gas causes laughter. For this reason, it is also called laughing gas.

when cold and the molecule HNO3 reacts with Zn, N2O is obtained.

In the laboratory, the flask is heated by mixing a mixture of sodium nitrate and ammonia sulfate. The obtained nitrous oxide gas is affected by KOH, FeSO4 and concentrated sulfuric acid. Which removes impurities of chlorine, nitric oxide and ammonia respectively. N2O collects gas in hot water. Because it is soluble in cold water.

This colorless sweet taste has gas. It is a fusion of water and alcohol. Its smell causes laughter. The smell in excess makes the man unconscious. And can also die of the throat.

It has no effect on litmus. Hence it is indifferent.

On heating, it gives nitrogen and oxygen.

It gives oxygen on heating. Therefore, it helps in burning things like oxygen.

It dissipates when flowing over hot copper.

Nitrous Oxide uses for especially in surgery and dentistry.

The molecular formula of Nitrous Oxide is N2O and the structure is like this:

The nitrogen atoms in nitrous oxide are sp hybridized and it is a linear molecule. Nitrous oxide is a polar co-ordinate molecule and its two-pole base must be higher, in fact, its double pole base is very useful. For this reason, it is assumed that it is a resonant hybrid of the following two structures.

What is nitric acid used for?|| Nitric Acid Preparation