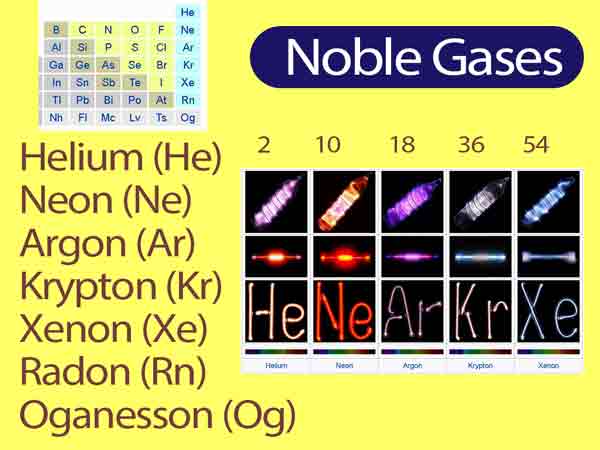 Noble gases are a gas composed of Group 0 elements on the periodic table. At normal temperature and pressure, they are colorless and odorless monoatomic gases, making it difficult to carry out chemical reactions.

A total of seven kinds of rare gas, which is helium (He), neon (Ne), argon (Ar), krypton (Kr), xenon (Xe), radon (Rn of, radioactivity), gas Austria (Og, radioactivity, artificial element). Among them, Og is a rare gas synthesized artificially, the nucleus is very unstable, and the half-life is very short only 5 milliseconds.

According to the periodic law of the element, it is estimated that Og is more lively than tritium. However, theoretical calculations show that it can be very lively. However, the carbon group element rhenium (Fl) exhibits properties similar to those of rare gases

The air contains about 0.94% (volume percent) of rare gases, most of which is argon.

Rare gases are colorless, odorless, and odorless. They are slightly soluble in water and their solubility increases with increasing molecular weight.

The outermost electronic structure of rare gas atoms is ns2np6 (1s2 for helium), which is the most stable structure. Their characteristics can be explained by modern atomic structure theory: they all have a stable 8- electron configuration. The electrons in their outermost electron layer have been “full” (that is, the octahedral state has been reached), so they are very stable and rarely undergo chemical reactions.

So far, only a few hundred rare gas compounds have been successfully prepared. The melting point and boiling point of each rare gas are very close, and the temperature difference is less than 10°C (18°F), so they exist as liquids only in a small temperature range.

The electron affinity of rare gases is close to zero. Compared with other elements, they all have high ionization potential. Therefore, noble gas atoms do not easily gain or lose electrons under normal conditions to form chemical bonds. It shows that the chemical properties are very inactive, not only difficult to combine with other elements, but also exist in the form of monoatomic molecules, and there is only a weak van der Waals force (mainly dispersion force) between the atoms.

Neon, argon, krypton, and xenon can be obtained from the air by gas liquefaction and fractionation methods. Helium is usually extracted from natural gas, and radon is usually separated by radioactive decay of radium compounds. Rare gases are mainly used in industrial applications in lighting equipment, welding and space exploration. Helium is also used in deep-sea diving.

If the diving depth is greater than 55 meters, the nitrogen in the compressed air bottle used by the diver should be replaced by helium to avoid the symptoms of oxygen poisoning and nitrogen anesthesia.

On the other hand, since the hydrogen gas is very unstable, easy combustion and explosion, today’s airships and balloons are used helium replace hydrogen.

Taking advantage of the extremely inactive chemical properties of rare gases, some production departments often use them as protective gas.

For example, argon is often used as a shielding gas in the welding of precision parts or active metals such as magnesium and aluminum, and in the manufacture of semiconductor transistors.

The nuclear fuel plutonium of atomic energy reactors will also rapidly oxidize in the air, and it also needs to be processed under the protection of argon. The argon filling in the electric bulb can reduce the vaporization of the tungsten wire and prevent the tungsten wire from oxidizing, so as to prolong the service life of the bulb.

Helium is the carrier gas in gas chromatography and the filling gas for thermometers and is used in radiation measurement equipment such as Geiger counters and bubble cells.

Noble gases glow when energized. The first neon light in the world was made of neon (the original meaning of neon in English is “neon”). The red light emitted by the neon lamp has a strong transmission force in the air and can pass through dense fog. Therefore, neon lights are commonly used on the beacons of airports, ports, and land and water transportation lines.

The tube is filled with argon or helium, which emits light blue or reddish light when energized. Some lamps are filled with a mixture of four gases (also three or two) such as neon, argon, helium, and mercury vapor.

Due to the relative content of various gases, neon lights of various colors are produced. Fluorescent lamps commonly used are made by filling a small amount of mercury and argon in a lamp tube, and coating a fluorescent substance (such as calcium halophosphate) on the inner wall.

When energized, ultraviolet rays are generated in the tube due to mercury vapor discharge, which excites fluorescent substances and causes it to emit visible light similar to daylight, so it is also called a fluorescent lamp.

Tritium can reduce the evaporation rate of the filament and is often used in incandescent lamps with higher color temperature and higher efficiency. Especially in halogen lamps, tritium can be mixed with a small amount of iodine or bromine compounds. Xenon is commonly used in xenon arc lamps because their near-continuous spectrum is similar to sunlight. This kind of lamp can be used in movie projectors and car headlights, etc.

A variety of mixed gas lasers can be made using rare gases. A helium-neon laser is one of them. The helium-neon mixed gas is sealed in a special quartz tube.

Under the excitation of an external high-frequency oscillator, inelastic collisions occur between the atoms of the mixed gas, energy transfer occurs between the excited atoms, and an electronic transition occurs. It emits simulated radiation corresponding to the transition, near-infrared light.

He-Ne lasers can be used for measurement and communication. Noble gases can be used in excimer lasers because they form excimers in electronically excited states that are transiently present. The excimer laser used may be a noble gas dimer, e.g. Ar2, Kr2, or Xe2, more likely in combination with a halogen excimer, e.g. ArF, KrF, XeF or XeCl.

These lasers produce short-wavelength ultraviolet light, of which the wavelength of ultraviolet light generated by ArF is 193 nanometers and KrF is 248 nanometers. This high-frequency laser makes high-precision imaging a reality. Excimer lasers have many industrial, medical, and scientific uses. Microlithography and microfabrication in integrated circuit manufacturing must use excimer lasers. Laser surgery, such as angioplasty and eye surgery, also requires excimer lasers.

Helium is the lightest gas other than hydrogen. It can be installed in an airship instead of hydrogen and will not catch fire or explode. Liquid helium has a boiling point of -269°C, which is the most difficult to liquefy of all gases.

Ultralow temperatures close to absolute zero (-273.15°C) can be obtained using liquid helium. Helium gas is also used instead of nitrogen as artificial air for sea-searching divers to breathe, because in deep seas with high pressure, breathing with ordinary air, more nitrogen will be dissolved in the blood.

When the diver ascends from the deep sea and gradually returns to normal pressure in the body, the nitrogen dissolved in the blood will be released to form bubbles, which will block the microvessels and cause “gas plugging”.

The solubility of helium in the blood is much smaller than that of nitrogen. If you replace ordinary air with a mixed gas of helium and oxygen (artificial air), the above phenomenon will not occur. Liquid helium with a temperature above 2.2K is a normal liquid and has the general liquid permeability.

Liquid helium below 2.2K is a superfluid with many anomalous properties. For example, it has superconductivity and low viscosity. Its viscosity becomes one hundredth of the viscosity of hydrogen, and this liquid helium can flow upward along the inner wall of the container, and then slowly flow down along the outer wall of the container. This phenomenon is of great significance for the research and verification of quantum theory.

Argon gas is subjected to an energetic cosmic radiation occurs after irradiation ionization. Using this principle, an argon-filled counter can be set in an artificial earth satellite. When an artificial satellite flies in space, argon is illuminated by cosmic rays. The more intense the irradiation, the stronger the ionization of argon.

Radios on satellites automatically send these ionized signals back to Earth, and people can determine the position and intensity of the space cosmic radiation band based on the size of the signals.

It can absorb X-rays and can be used as a light-shielding material when X-rays work.

Xenon lamps also have a high level of ultraviolet radiation and can be used in medical technology. Xenon can dissolve in the cytoplasmic fats, causing anesthesia and swelling of the cells, thereby temporarily stopping nerve endings. People have tried a mixed gas composed of 80% xenon and 20% oxygen as an anesthetic without side effects. In the atomic energy industry, xenon can be used to test the existence of high-speed particles, particles, mesons, and so on.

Tritium is the only natural radioactive gas in nature. When it acts on the human body, tritium will quickly decay into tritium that the human body can absorb, enter the human respiratory system and cause radiation damage and induce lung cancer.

The radon impurities in the inferior decoration materials will decay and release the radon gas, thus causing harm to the human body. External radiation mainly refers to the biological effect of the radiator in natural stone directly irradiating the human body, which will cause damage to the hematopoietic organs, nervous system, reproductive system and digestive system in the human body.

However, plutonium also has its purpose. It seals beryllium powder and plutonium in a tube. The alpha particles released during the decay of plutonium undergo nuclear reactions with beryllium nuclei, and the neutrons produced can be used as neutron sources in the laboratory. Thorium can also be used as a gas tracer for detecting leaks in pipes and studying gas movement.

What is aniline used for? Preparation, Properties, and Tests

Glycerol: What Glycerol used for? | Preparation and Properties