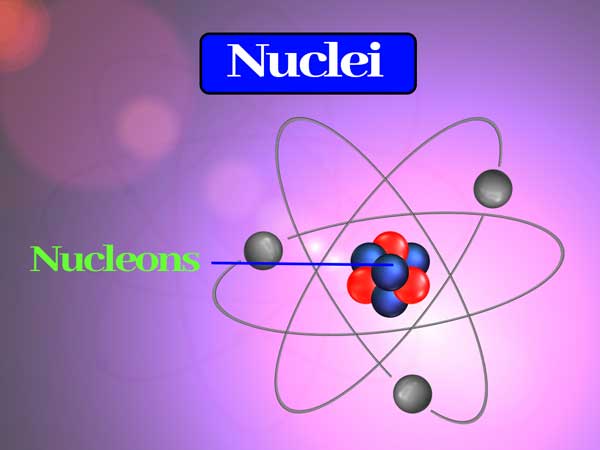 Composition of the Nucleus

– Number of protons in an atom = Z

– Number of electrons in an atom = Z

– Number of nucleons in an atom = A

Nuclide: It is a specific nucleus of an atom which is characterised by its atomic number Z and mass number A. It is represented by ZXA where X is the chemical symbol of the element.

Nuclear Radius: Nuclear radius R = R0 A1/3 where R0 is a constant and A is the mass number.

Nuclear density is independent of A and is in order of the 1017 kg m–3.

Isotopes: Isotopes of an element are the atoms of the element which have the same atomic number but different mass numbers. e.g. 1H1, 1H2, 1H3, are the three isotopes of hydrogen.

Isobars: Isobars are the atoms of different elements which have the same mass number but different atomic numbers. e.g. 11Na22 and 10Ne22.

Isotones: Isotones are the nuclides which contain the same number of neutrons. e.g. 7Cl37 and 19K39.

Nuclear forces are the strong forces of attraction that hold together the nucleons (neutrons and protons) in the tiny nucleus of an atom, in spite of strong electrostatic forces of repulsion between protons.

Nuclear forces are the strongest forces in nature.

Mass defect: The difference in mass of a nucleus and its constituents is known as the mass defect and is given by

Radioactivity: Radioactivity was discovered in 1896 by Antoine Henri Becquerel. Radioactivity is the spontaneous disintegration of nuclei of some nuclides (called radionuclides) with the emission of alpha particles or beta particles, some accompanied by a gamma-ray emission.

Nuclear reactor: The nuclear reactor uses nuclear energy for peaceful purposes. It is based on the phenomenon of controlled nuclear chain reaction. Moderators like heavy water, graphite, paraffin, and deuterium slow down neutrons. Rods of cadmium and boron serv as control rods. Ordinary water and heavy water serve as coolants.

Nuclear fusion: It is the phenomenon of fusing two or more lighter nuclei to form a single heavy nucleus.

– The nuclear fusion reaction of two deuterons is represented as

– Temperature ≈ 107 K is required for fusion to take place.

– Nuclear fusion is the basis of a hydrogen bomb.

Stellar Energy: It is the energy obtained from the sun and stars. The source of stellar energy is nuclear fusion.