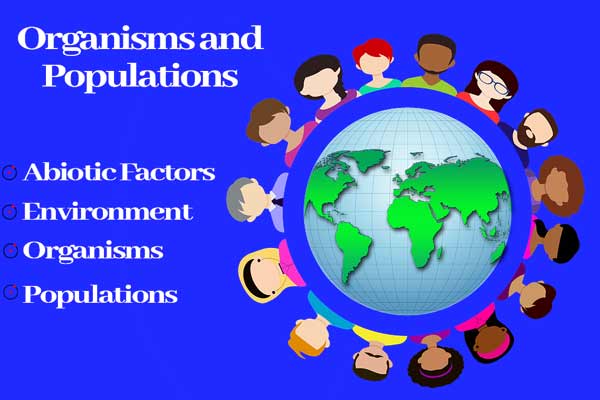 Organisms and Populations: The term ‘ecology’ is derived from two Greek words-Oikos means ‘house or place to live’ and logos means ‘a discussion or study’.

The German biologist Ernst Haeckel (1869) is credited for the coinage of the term ecology.

Ecology may be defined broadly as the science of interrelation between living organisms and their environments including both the physical and biotic environments.

A population is a group of individuals of the same species living together in a common area at a particular time. The different populations of the same kind of organisms are often referred to as the local population.

Members of a local population may be genetically adapted to their specific environment, such a population is called ecotype.

A biotic community is an assemblage of populations of different species of plants, animals, bacteria, and fungi that live in a particular area and interact with one another through competition, predation, mutualism, etc.

Ecosystem is a segment of nature consisting of a biological community and its physical environment both interacting and exchanging materials as well as energy.

Landscape is a unit of land distinguished by a natural boundary and having patches of different ecosystems, e.g., Southern peninsula.

The biosphere is a biologically inhabited part of the earth along with its physical environment consisting of lower atmosphere, land and water bodies.

Organisms and Its Environment

No organism can live alone. It has to interact with its immediate surroundings which include both biotic and abiotic factors.

Environment is the sum total of all biotic and abiotic factors, substances and conditions that surround and potentially influence organisms without becoming their constituent part.

Microclimate refers to the climatic conditions present at local scale i.e., within an area of limited size.

Habitat is a specific place or locality delimited by a combination of factors, physical features and barriers where a community resides.

Microhabitat is a part of the habitat having a specific property, e.g., forest floor, tree canopy, tree trunk, edge of a pond.

Niche or ecological niche (Grinnel, 1917) is a specific part of habitat occupied by individuals of a species which is circumscribed by its range of tolerance, range of movement, microclimate, type of food and its availability, shelter, type of predator, and timing of activity. In other words, ecological niche means the total interaction of a species with its environment, or its functional position or status in an ecosystem.

Any external thing, substance or condition which has effect on living organism is called ecological factor and totality of all these factors constitute environmental complex or environment. There are four major types of factors:

Climatic factors: These are related to climate like, light, temperature, humidity, precipitation, wind, atmosphere and fire.

Topographic factors: These are related with physical geography of earth and are also called physiographic factors, e.g., altitude, direction of mountain and valleys, etc.

Edaphic or soil factors: These factors affect through soil.

Biotic or living factors: Living organisms have effect on other organisms and these constitute biotic factors.

Light is responsible for daily rhythm in animals. Photoperiodism controls migration in birds, hibernation, and breeding in animals whereas in plants it controls flowering and vegetative growth.

Not only the physiological functions but also the geographical distribution of many plants and animals are governed by temperature. It influences the living organisms in the following manner:

Water is an important component of protoplasm being used as a general solvent, a reactant, a metabolic by-product and an essential material for maintaining turgidity. Water is a resource, a condition and a habitat in itself. The productivity and distribution of plants is also heavily dependent on water.

Soil is very important ecological factor as it provides water, minerals or nutrients and support to the producers (plants).

Mineral particles are the chief components of soil complex and are formed by weathering of rocks. Depending upon size of mineral particles, soils are of following types:

Gravel or Stone: More than 2 mm

The appearance of different layers superposed one above the other in a vertical section of soil from surface downward to the parent rock is called soil profile.

The horizons of soil are O, A, B and C. Unbroken and unweathered parent bedrock lies below C horizon.

A process by which the organism keeps the internal environment constant despite drastic changes in external conditions is called homeostasis.

Regulators: Some organisms are able to maintain constant body temperature and constant osmotic concentration despite changes in the external environment. They are called regulators.

Some species are partial regulators. They have the ability to regulate body functions to a limited extent. Beyond that limit they become conformers.

Migration: The organisms can migrate temporarily from the unfavorable habitat to more favorable area and return when unfavourable period is over.

Suspension: Various kinds of thick-walled spores are formed in bacteria, fungi and lower plants which help them survive under unfavourable conditions. These germinate on return of suitable conditions.

In animals, the organism, if unable to migrate, might avoid the unfavourable environment by escaping in time. For example, polar bears go into hibernation during winter season to escape extreme cold. Some snails and fish undergo aestivation to avoid summer-related problems like heat and desiccation. Under favourable conditions many zooplankton in lakes and ponds are known to enter diapause i.e., a stage of suspended development.

Adaptation is any attribute of the organism (morphological, physiological behavioural that enables it to survive and reproduce in its habitat.

Plants that are adapted to bright sunlight are called sun plants or heliophytes.

Plants which grow in partial shade or low intensity light are called shade plants or sciophytes.

The term population has its origin in the Latin word populus, meaning people. In ecology, a population may be defined as a group of organisms of the same species occupying a particular space in a given time. The ultimate constituents of the population are individual organisms that can potentially interbreed.

Physical characteristics of a population

The basic characteristic of a population is its size or density (number of individuals present per unit space in a given time) which is affected by four primary population parameters such as natality, mortality, immigration and emigration.

Migration: Movement of individuals in or out of the population is called migration. It may be in order to get food, space, shelter, job, to avoid predators, etc. It is of two types:

Emigration: It refers to moving out of individuals. It results in a decrease of population size.

Immigration: It refers to moving in of individuals. It results in an increase in population size.

Every population has a specific growth form i.e., a characteristic pattern of increase. There are 2 basic population growth forms i.e., S-shaped and J-shaped.

Organisms belonging to different populations interact for food, shelter and for the fulfillment of other necessities.