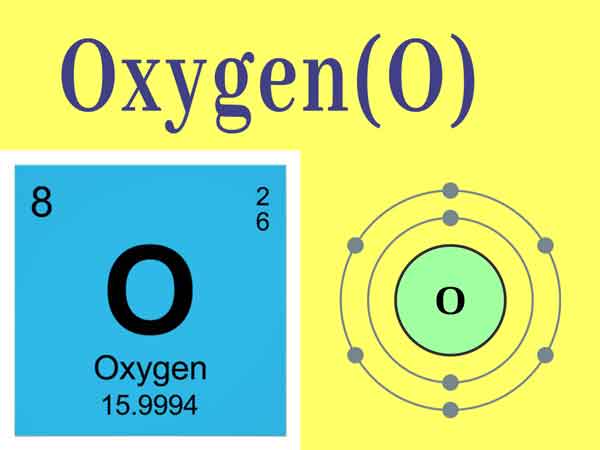 Oxygen, symbols of the elements O, located in the periodic table of the second-period ⅥA group oxygen atom. In 1774, British scientist J. Joseph Priestley used a lens to focus sunlight on oxidized mercury and found a gas that strongly assisted combustion.

Antoine — Laurent Lavoisier (Antoine-Laurent de Lavoisier) studied this gas and the correct interpretation of the role of this gas in the combustion.

Oxygen is the most abundant and widely distributed element in the earth ‘s crust, and it is also the most important element in the biological and non-biological world. The content of the crust is 48.6%. Elemental oxygen accounts for 20.9% of the atmosphere.

Oxygen is a chemical element, atomic number 8, the relative atomic mass of 16.00. In the periodic table, oxygen is a member of the oxygen group. It is also a highly reactive second-cycle non-metallic element that easily forms compounds (mainly oxides) with almost all other elements.

Under standard conditions, two oxygen atoms combine to form oxygen, which is a colorless, odorless and tasteless diatomic gas with the chemical formula O2.

If calculated by mass, oxygen is second only to hydrogen and helium in the universe, and oxygen is the most abundant element in the earth’s crust. Oxygen not only accounts for 89% of the water quality but also accounts for 20.9% of the air volume.

All major compounds that make up an organism contain oxygen, including proteins, carbohydrates, and fats.

The main inorganic compounds that make up the shell, teeth, and bones of the animal also contain oxygen. The oxygen chemical formula produced by photosynthesis of cyanobacteria, algae, and plants is O 2, and oxygen is required for the cellular respiration of almost all complex organisms.

Animals, except for a very small number, cannot survive without oxygen for life. But for anaerobic organisms such as tetanus, oxygen is toxic.

This type of anaerobic organism was once the main organism on the early Earth, and oxygen began to accumulate in the atmosphere until 2.5 billion years ago. Another allotrope of oxygen is ozone.

The ozone layer formed at high altitudes is able to isolate ultraviolet radiation from the sun. But ozone close to the surface is a kind of pollution, which is mainly found in photochemical smog.

Oxygen is a chemical element which atomic number is 8, the relative atomic mass is 15.9994. It is represented by the symbol “O”.

In the periodic table, oxygen is a member of the oxygen group. It is also a highly reactive second-cycle non-metallic element that easily forms compounds (mainly oxides) with almost all other elements.

Under standard conditions, two oxygen atoms combine to form oxygen, which is a colorless, odorless and tasteless diatomic gas with the chemical formula O 2. oxygen atom

If calculated by mass, oxygen is second only to hydrogen and helium in the universe, and oxygen is the most abundant element in the earth’s crust. Oxygen not only accounts for 89% of the water quality but also accounts for 20.9% of the air volume.

There are seventeen known oxygen isotope species, including oxygen-12 to oxygen-28, among which oxygen-16, oxygen-17, and oxygen-18 are stable, and other known isotopes are radioactive with half-life.

All are less than three minutes. The protons generated by the medical cyclotron are bombarded with oxygen -18 in the heavy oxygen water, and the (p, n) nuclear reaction is obtained to obtain the positron-emitting radioisotope fluorine-18 ion for synthesizing positron emission computed tomography.

Oxygen, non-metallic and electrically negative after fluorine, in addition to helium, neon, argon, krypton, all elements

In general, most aqueous solutions of non-metal oxidesare acidic, while alkali metal or alkaline earth metal oxides are basic.

In addition, most organic compounds can be burned in oxygen to form carbon dioxide and water vapor, such as alcohol and methane. Some organic matter nonflammable, and oxygen but can also be an oxidant occurs an oxidation reaction.

The valence of oxygen is very specific and generally is -2 and 0. Oxygen is usually -1 in peroxide.

In superoxide as -1/2, ozonide oxygen was -1/3, herein referred to as an apparent valence is the valence of the surface out no real meaning, superoxide oxygen valences can only be said to be superoxide ions, cannot look at each atom separately, because the electrons are quantized.

Experiments have shown that all metals except gold react with oxygen to form metal oxides.

Such as platinum at high-temperature pure oxygen is generated in the oxidized platinum dioxide, oxygen and gold are generally considered not react, but Gold (III) oxide and gold hydroxide and other compounds in which gold is trivalent; and oxygen can not chlorine, Bromine, iodine reacts, but ozone can oxidize them. oxygen atom

It belongs to the VIA family element in the periodic table, and the valence is generally 0 and -2. Most of the elements form oxides when heated in an oxygen-containing atmosphere. There are many elements that can form more than one oxide.

Produces a yellow flame, releasing a lot of heat to produce a light yellow powder

Intense burning produces a dazzling glare that releases a lot of heat and produces a white powdery solid.

Gives a bright light that emits heat and produces a white solid.

The surface of the bright red copper wire after heating generates a layer of black matter.

Burns quietly, producing a light blue flame that produces water and gives off a lot of heat.

When white phosphorus is higher than 44 degrees Celsius, it will spontaneously ignite in oxygen, and it will generate heat and generate white smoke.

(The oxygen produced contains a small amount of Cl 2, O 3 and trace amounts of ClO 2 some of the textbooks have been deleted,

First, the air is pre-cooled and purified (removing a small amount of moisture in the air, carbon dioxide, acetylene, hydrocarbons, and other impurities such as gases and dust), and then compressed and cooled to make it liquid air.

If add some additional means may further extract argon, neon, helium, krypton, xenon, air content is an extremely rare inert gas. The oxygen produced by the air separation unit is compressed by the compressor, and finally, the compressed oxygen is stored in a high-pressure steel cylinder or directly sent to the factory or workshop through a pipeline.

The use of this method to produce oxygen, although the need for large-scale equipment and strict safe operation technology, but the output is high, can produce thousands of cubic meters of oxygen per hour, and the raw materials used are simply not to buy, do not use Since the air stored in the warehouse is not used, the first cryogenic air separation oxygen generator has been developed since 1903. This oxygen production method has been the most widely used.

Put the water into the electrolytic cell, add sodium hydroxide or potassium hydroxide to increase the degree of electrolysis of the water, and then pass the direct current, the water will be decomposed into oxygen and hydrogen.

One cubic meter of oxygen per system is obtained, and two cubic meters of hydrogen are obtained at the same time.

It takes 12 to 15 kWh to produce one cubic meter of oxygen by electrolysis, which is uneconomical compared with the power consumption of the above two methods (0.55 to 0.60 kWh).

Therefore, the electrolysis method is not suitable for a large amount of oxygen production. In addition, the hydrogen produced at the same time is collected in the air if it is not properly collected. If it is mixed with oxygen, it is prone to extremely severe explosion. Therefore, the electrolysis method is also not suitable for household oxygen production.

Oxygen, one of the main components of air, is heavier than air and has a density of 1.429 g/l under standard conditions (0 ° C, 101,325 Pa). Colorless and tasteless. oxygen atom

At normal temperature, it is a blue gas with a fishy smell. Ozone is mainly present in the ozone layer at the top of the stratosphere 20 to 35 km from the Earth’s surface. oxygen atom

Under normal temperature and pressure, the stability is extremely poor, and it can be decomposed into oxygen by itself at normal temperature. Ozone is highly irritating, and excessive inhalation poses a certain hazard to human health.

The melting point is 21K, the boiling point is 160.6K, and the solubility is relatively large, and it is 494mol/L at 273k. It has diamagnetic properties.

Almost all of the previously mentioned elements can react with oxygen, and the binary compound in which only oxygen and another element are present in the compound is an oxide such as water, CO 2. oxygen atom

Oxides are various and mainly divided into acidic oxides, basic oxides, amphoteric oxides, non-salt oxides, and pseudo-oxides. In addition, some groups containing only oxygen can form oxides, which are classified into peroxides, superoxides, and ozonides.

Oxygenates generally refers to all compounds containing oxygen, which are larger than the oxide range and are not required for the type of elements of the constituent materials.

The oxygen molecule can be stably present, and the configuration is expected to be a regular tetrahedron or a rectangle, from the two configurations of the neutral molecule O 4. oxygen atom

The respective structural parameters and the total energy, monovalent ionization energy and electron affinity potential of the two structures of O 4 molecules are obtained.

As the pressure of oxygen exceeds 10 GPa at room temperature, it will unexpectedly phase change into another allotrope. Its volume has plummeted and its color has changed from blue to deep red.

This ε phase was discovered in 1979, but its structure was not clear at the time. Based on its infrared absorption spectrum, in 1999, the researchers concluded that this phase is a crystal of O 4 molecules.

But in 2006, X-ray crystallography showed that this stable phase, called ε oxygen or red oxygen, was actually O 8. This structure has not been theoretically predicted: a diamond-shaped O 8 cluster consisting of four O 2 molecules.

Fluorine Uses || How Fluorine was Discovered || Why Fluorine is Most Reactive