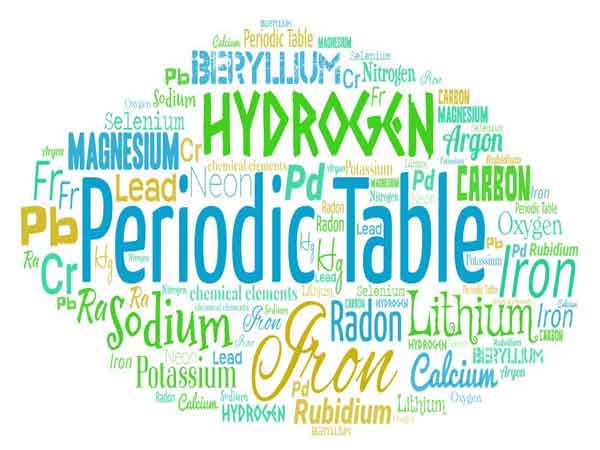 Periodic Table is an atom from small to large chemical elements sorted list of the ordinal numbers. The list is generally rectangular, with spaces in certain element periods, so that elements with similar characteristics fall into the same group, such as alkali metal elements, alkaline earth metals, halogen elements, rare gases, etc.

This makes the periodic table form element divisions and is divided into seven main families, seven sub-tribes, Dais, and 0 families. Because the periodic table can accurately predict the characteristics of various elements and their relationships, it is widely used in chemistry and other scientific fields as a very useful framework for analyzing chemical behavior.

Modern chemistry periodic law is the 1869 Russian scientist Mendeleev (Dmitri Mendeleev) first created, he will be 63 elements known at that time in accordance with the relative atomic mass and size are arranged in the form of a table, to have similar chemical properties The elements are placed in the same column to make the prototype of the periodic table. It became a contemporary periodic table after many years of revision.

In the periodic table, elements are arranged by their atomic number, with the smallest ranking first. A row in the table is called a period, and a column is called a family. The atomic radius decreases from left to right and increases from top to bottom.

In the chemistry textbooks and dictionaries, there is a “the periodic table”. This table reveals the secrets of the material world and unifies some seemingly unrelated elements to form a completely natural system. Its invention, is the modern history of chemistry a pioneering work for the promotion of the development of chemistry, played a huge role. When you see this watch, people will think of its earliest inventor- Mendeleev.

In 1869, the Russian chemist Mendeleev arranged from small to large according to the relative atomic mass, put elements with similar chemical properties in the same column, and compiled the first periodic table of elements.

The periodic table elements reveal the internal connection between chemical elements, making it a complete system, and becoming one of the important milestones in the history of chemical development. With the development of science, the vacancies left by unknown elements in the periodic table have been filled.

When the mystery of the atomic structure was discovered, the arrangement was based on the change from the relative atomic mass to the number of protons of the atom, the number of electrons outside the core or the number of nuclear charges, to form the current periodic table of elements.

Using the periodic table, Mendeleev successfully predicted the properties of elements that had not yet been discovered (gallium, thallium, and germanium).

In 1913, British scientist Moseler used cathode rays to strike a metal to generate X -rays. He found that the larger the atomic number, the higher the frequency of X-rays.

Therefore, he believed that the positive charge of the nucleus determined the chemical properties of the element, and he considered the element in positively charged (i.e., a proton number or atomic ordinal number) are arranged.

Later, after many years of revision by many scientists, the contemporary periodic table was formed. Arrange the elements in ascending order of relative atomic mass, and place elements with similar chemical properties in a column. Each element has a sequence number that is exactly equal to the number of protons in the nucleus of the element’s atom.

This sequence number is called the atomic number. In the periodic table, the elements are arranged by their atomic number, with the smallest ranking first. A row in the table is called a period, and a column is called a family.

The periodic table has 7 periods and 16 families. Each horizontal line is called a cycle, and each vertical line is called a family (Group VIII contains three columns). These 7 cycles can be divided into short cycles (1,2,3) and long cycles (4,5,6,7). There are 16 families, and each column counts from left to right (except for family VIII).

The position of the element in the periodic table not only reflects the atomic structure of the element but also shows the gradual change law of the element’s nature and the inherent relationship between the elements. It constitutes a complete system and is called one of the important milestones in the development of chemistry.

The periodic table of the elements is of great significance, and scientists use it to find new elements and compounds.

On December 31, 2015, the US “Science News” biweekly website published a report entitled “Four Elements Get Permanent Seats on the Periodic Table”. The International Union of Pure and Applied Chemistry (IUPAC) announced that research teams in Russia and the United States have obtained sufficient evidence that they have discovered elements 115, 117, and 118.

In addition, the federation has recognized that researchers from the Japan Institute of Physics and Chemistry have discovered element 113. The two research teams synthesized these four elements by letting lighter-weight nuclei hit each other and tracking the decay of the radioactive superheavy elements that followed.

IUPAC executive director Lynn Selby said that a report on the identification of new elements will be published in early 2016. Official recognition of these elements means that their discoverers have the right to name and design symbols for them. Element 113 will be the first element discovered and named by Asians. It was officially named Nihonium in June 2016, with the symbol Nh.

On December 30, 2015, the International Union of Pure and Applied Chemistry announced the existence of elements 113, 115, 117, 118, which will be named by scientists from Japan, Russia, and the United States. IUPAC has officially announced that four new elements have been added to the periodic table.

Many people have noticed that the last few elements of the periodic table often start with Uu. In fact, this is just a temporary naming rule called the IUPAC element system nomenclature.

In this nomenclature, an undiscovered element and an element that has been discovered but not formally named are given a temporary Western text name and a surrogate element symbol are specified, using the Latin numeral head to name the element in atomic order.

This rule is simple and easy to understand and easy to use, and it solves the vicious competition problem of preemptively naming newly discovered elements so that there is a basis for naming new elements.

Element 114 is named flerovium (Fl) in memory of Soviet atomic physicist George Flyorov (1913-1990), and ununhexium is composed of un (a) -un (a) -hex (six )-Ium (element) is a combination of four radicals, which means “element 116”. Element 116 is called livermorium (Lv) and is named after the city of Livermore, where the laboratory is located.

(1) Except for the first period, the atomic radius of other periodic elements (except rare gas elements) decreases as the atomic number increases;

(2) From the top of the elements of the same group, as the number of electron layers increases, the atom radius increases. (Except for sub-clan during five or six weeks)

(1) Except for the first cycle, from the left to the right in the same cycle, the highest regular price of elements in the second cycle increases from alkali metal +1 to nitrogen +5 (fluorine has no positive price, oxygen has no highest positive price), and other periodic elements.

(2) The highest positive price and lowest negative price of the elements of the same main group are the same. (Except for ⅥA, ⅦA, 0)

(1) From left to right element of the same cycle metallic decreasing, non-metallic increment;

(2) Elements of the same main group increase in metallicity from top to bottom, and non-metallicity decreases.

Acidity and alkalinity of the highest valent oxide hydrate

2. The ordinal number of the main group element is equal to the outermost electron number;

3. To determine the family number, first determine whether it is the main family or the sub-family. The method is to use the atomic number to gradually subtract the number of element types in each period, which can be determined by the final difference.

The vertical line of the number, if it is “2”, is the second vertical line in the periodic table from left to right, that is, group IIA, when the number is negative, the main family ordinal number is 8+ result.

Rare gases are also called inert gases. They are chemically stable and do not easily react with other substances. The stable noble gases are Helium (He) Neon (Ne) Argon (Ar) Krypton (Kr) Xenon (Xe) Radon (Rn).

For example, to know the position of element 33, because it is between 18 and 36, it must be in the fourth cycle, counting from 36 to the left, and it should be in the VA family.

The Periodic Table, p-block variation from top to bottom is not a strictly increasing curve, but a sawtooth-shaped curve. There are two inflection points on the curve: the second period and the fourth period. According to the calculation of the theory of relativity, a third inflection point will appear in the sixth cycle.

Irregularities in the second cycle

For example, nitrogen group elements (ⅤA), pentachlorides in the 3rd to 6th cycles have been prepared, but NF5 does not exist, let alone NCl5 and other molecules. Another example is that the maximum coordination numbers of carbon and silicon are different, which results in different crystal structures of carbon dioxide and silicon dioxide.

Irregularities in the fourth cycle

Elements in the p-region of the fourth period have just passed through the d-region, so the atomic radius does not change much compared to the third period of the same family. Therefore, many compounds of the fourth cycle element are relatively unstable, such as HClO4 and HIO4 were prepared very early, but HBrO4 was prepared only in 1967, and its oxidizing property is perhalic acid (except perfluoric acid, (Due to thermodynamic instability).

The atomic radius of the sixth period element is too large, and the 6s electron cloud is very spaced, making it difficult to form bonds. Except for Tl (Ⅲ) which is relatively stable, it is difficult to show the group valence of the other elements in the p-region in the sixth cycle.