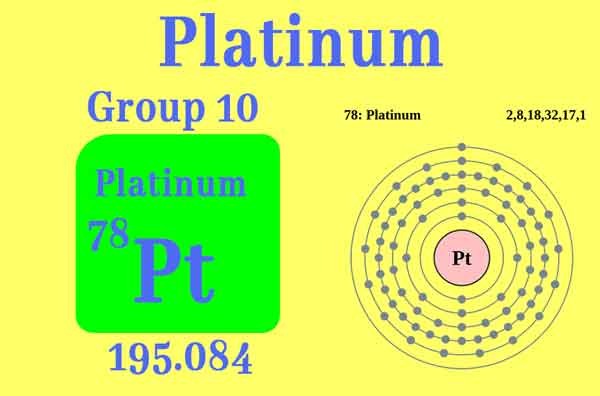 platinum alloys are palladium, iridium, rhodium, ruthenium, gold and nickel. Pt is a chemical element, which is commonly known as elemental platinum, platinum belonging element, its chemical symbol Pt and it is one of the noble metal.

The atomic weight is 195.078, which is slightly smaller than that of gold, with an atomic number of 78, which belongs to transition metals.

Sponge platinum is a gray sponge-like substance with a large specific surface area and a strong absorption capacity for gases (especially hydrogen, oxygen, and carbon monoxide).

Powdered platinum black can absorb a large amount of hydrogen. Platinum chemically inert, stable in air and moist environment, is lower than 450 deg. C heating, the surface form two platinum oxide film, can react with sulfur, phosphorus, a halogen at a high temperature.

Platinum is insoluble in hydrochloric acid, sulfuric acid, nitric acid and alkaline solutions, but soluble in aqua regia and molten alkali. The oxidation states of platinum are +2, +3, +4, +5, +6. Easy to form coordination compounds, such as [Pt (NH3)₂]Cl₂, K[Pt(NH₃)Cl₅].

Platinum is a silvery-white shiny metal, with a melting point of 1772°C, a boiling point of 3827 ± 100°C, a density of 21.45g / ㎝³ (20°C), softer, and has good ductility, thermal conductivity and electrical conductivity. Sponge platinum is a gray sponge-like substance with a large specific surface area and a strong absorption capacity for gases.

Platinum is a transition metal with high density and ductility, silvery-white color, metallic luster, hardness 4-4.5, and relative density of 21.45. The melting point is 1773°C. Fully ductile, can be drawn into very fine platinum wire and rolled into the extremely thin platinum foil.

Extremely stable chemical properties, Insoluble in strong acid and alkali solution, does not oxidize in air. The first ionization energy is 9.0 electron volts. The valences are +2, +4 and +6. The melting point is 1772°C and the boiling point is 3827°C. The density is 21.46g /㎝³.

Alkali and other reagents. However, platinum is susceptible to corrosion at high temperatures. For example: for many oxidants, strong alkalis, heavy metals that are easily reduced, and sulfur, phosphorus, arsenic, etc., platinum is either destroyed or alloyed with it.

Do not use a large amount of super-oxidant, sodium (potassium hydroxide) as flux at high temperature. Platinum vessels are not allowed to handle halogens or substances that decompose halogens. But the following substances can dissolve platinum:

Although aqua regia can dissolve platinum, this is related to the state of platinum. Dense platinum dissolves very slowly in aqua regia at room temperature. It takes 4-5 hours for a platinum wire with a diameter of 1 mm to completely dissolve.

Platinum black (platinum powder) can react with concentrated sulfuric acid when heated to form Pt (SO4)2, SO2 and water. Chloroplatinic acid is produced by dissolving platinum in aqua regia. The product of this reaction is H2PtCl.6, not previously considered nitrogen-containing platinum compounds. Chloroplatinic acid is a reddish-brown solid that can be obtained by evaporating its solution.

Alkali metal cyanides can also dissolve platinum. Platinum can react with halogens at high temperatures, but selenium, tellurium, and phosphorus react more easily with platinum. Dense metallic platinum is not oxidized in the air at any temperature.

Dissolve the treated platinum concentrate or anode copper produced from electrolytic copper and nickel with aqua regia. After a series of chemical treatments, ammonium chloroplatinate can be obtained.

It is used as a catalyst in the production of vitamins. Reforming naphtha with a platinum catalyst can increase the octane number of gasoline products. Platinum and its alloys are resistant to oxidation and corrosion at high temperatures and are used to make crucibles, evaporation dishes, electrodes, nozzles, reactors, and so on. Platinum and platinum-rhodium alloys are used as wire and thermocouples for high-temperature furnaces in the metallurgical, glass, and ceramic industries. Platinum is also used in jewelry.

Platinum, also known as platinum, is a Group VIII platinum element of the periodic table, a tin-white metal, with an atomic number of 78, a relative atomic mass of 195.09, a density of 21.45 g/cm³, a melting point of 1769°C, and a boiling point of 3800°C. Pure platinum has good high-temperature oxidation resistance and chemical stability and is easy to form. Platinum compounds are used as catalysts in the fields of the chemical industry, pharmaceuticals, refining, and automobile exhaust purification.

Platinum minerals containing impurities such as iron, iridium, and palladium are silver-white or dark gray and belong to the equiaxed crystal system. They are irregular granular or scaly aggregates with a density of 13.35 ~ 19g/cm³ and are rich in ductility. Chemical composition: Pt crystal is a natural element mineral of the Equiaxed crystal system. Also known as platinum, the so-called platinum in ancient Chinese books refers to silver, not platinum.

Gray sponge-like metals with platinum mass fraction ≥99.995% are divided into two grades according to platinum content: SM-Pt99.995 and SM-Pt99.999, which are generally prepared after separation and purification from various platinum-containing materials for the chemical industry, electrical instruments, precision alloys and temperature measurement materials.

The platinum-based iridium-containing binary alloy is a continuous solid solution at high temperature. When it is slowly cooled to 975 ~ 700 ℃, solid-phase decomposition occurs, but the phase equilibrium process proceeds slowly. Iridium is volatile and oxidizable, which can significantly improve the corrosion resistance of platinum.

The platinum-based binary alloy containing molybdenum has a platinum-enriched solid solution with a Face-Centered cubic structure, and the resistivity increases linearly with the increase in molybdenum content. The tensile strength of the platinum-molybdenum alloy is 922N/ mm-2, the resistivity is 0.64Ω.mm-2/m, and the temperature coefficient of resistance is 2.4× 10⁻⁴/℃.

They have high thermoelectric potential and good stability and can work in nuclear fields. The operating temperature is 1500 ~ 1600 ℃. In addition, platinum-molybdenum alloys can also be used as potentiometer windings and high-temperature strain materials.

A platinum-based rhenium-containing binary alloy undergoes a simple peritectic reaction at a temperature of 2450°C, and is protected by hydrogen in a high-frequency furnace for smelting. After hot blooming, it is cold processed into material.

There are two types of platinum-rhenium alloys: PtRe8 and PtRe14. PtRe8 is a high-temperature thermocouple material. When paired with rhodium, the instantaneous temperature can reach 1800°C and when paired with platinum, it is 1600°C. PtRe14 alloy is used as an electrical contact material.

Platinum-based cobalt-containing binary alloys, at high temperatures, platinum and cobalt can be infinitely soluble. Its solid solution is a face-centered cubic lattice, which is slowly cooled to 833°C, and an orderly transformation begins to occur in the alloy.

The platinum-based copper-containing binary alloy is a continuous solid solution at high temperatures. At low temperatures, there is an orderly transformation in the range of 3% ~ 93% copper composition, and the phase structure changes from cubic lattice to rhombohedral, resulting in the alloy. Significantly strengthened. Products are PtCu2.5, PtCu5,

The platinum-based nickel-containing binary alloy is a continuous solid solution at high temperatures and generates two superstructure compounds below about 645°C. Platinum-nickel alloys include alloys such as PtNi2, PtNi5, PtNi10, and PtNi20. When heated in an oxidizing atmosphere, nickel is selectively oxidized. It is smelted with argon protection in a high-frequency induction heating furnace and can be processed into wires and sheets.

A platinum-based rhenium-containing binary alloy. Osmium has the effect of improving the hardness and resistivity of the alloy. The platinum-rhenium alloy is smelted by argon gas protection in a high-frequency furnace, and then cold-rolled into the material after hot rolling.

Platinum has a wide range of applications due to its high chemical stability (insoluble in any acids and bases except aqua regia) and its catalytic activity. It can be combined with cobalt to make strong magnets. Mostly used to make corrosion-resistant chemical instruments, such as various reaction vessels, evaporation dishes, crucibles, electrodes, platinum mesh, etc.

Platinum and platinum-rhodium alloys are often used as thermocouples to measure temperatures from 1200 to 1750°C. It can also be used to make jewelry. Platinum can be used as a catalyst in chemical reactions such as hydrogenation, dehydrogenation, isomerization, cyclization, dehydration, dehalogenation, oxidation, and cracking.

In medicine, it can be used as an anticancer drug, and platinum compounds such as cisplatin are used for cancer chemotherapy.