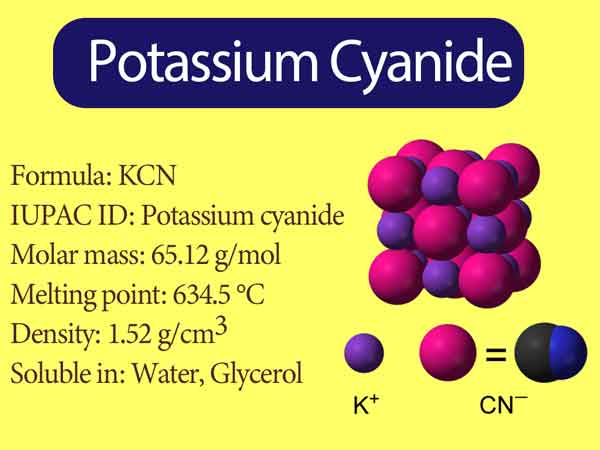 White globular lumps, granular or crystalline powder, highly toxic. It deliquesces in humid air and emits traces of hydrogen cyanide gas. Easily soluble in water, slightly soluble in alcohol, the aqueous solution is strongly alkaline and quickly hydrolyzed. The density is 1.857 g/cm^3, the boiling point is 1497°C, and the melting point is 563°C.

Contact with skin wounds or inhalation of trace amounts of powder can poison death. Decomposition by contact with acid can release highly toxic hydrogen cyanide gas, and it can explode when mixed with chlorate or sodium nitrite.

This product is controlled by the public security department according to the ” Dangerous Chemicals Safety Management Regulations “.

Deterioration in the air

2. The aqueous solution is easy to deteriorate

And sodium cyanide for the same purpose can be common. Compared with sodium cyanide, it has the advantages of high conductivity and fine coating when it is electroplated. It is more suitable for use, but it is more expensive. Used for ore flotation to extract gold and silver.

Heat treatment of steel to produce organic nitriles. Analytical chemistry is used as a reagent. In addition, it is also used for photography, etching, lithography, etc.

Health hazard: Inhibition of respiratory enzymes, causing intracellular suffocation. Acute poisoning can be caused by inhalation, oral or transdermal absorption. Sudden death can be caused by oral administration of 50 to 100 mg. Non-sudden death patients are clinically divided into 4 stages:

Metabolism and degradation: free cyano in vivo metabolic pathway is the enzyme thiocyanate (or β-mercapto-pyruvate transferase enzyme) catalysis, the sulfur from the addition reaction, conversion into low toxicity SCN (only CN -1/200 of toxicity). It is then excreted from urine, saliva, sweat, etc.

The human body has a strong detoxification function against CN-, and cyanide is a non-accumulating poison. When a small amount of exogenous cyanide does not cause a toxic dose to enter the body, it can be quickly converted into non-toxic or low-toxic substances and excreted from the body.

Cyanide is very unstable in surface water. When the pH of the water is greater than 7 and the presence of oxygen, it can be oxidized to form carbonates and ammonia. Surface water contains microorganisms that can decompose and use cyanide and can also convert cyanide to carbonate and ammonia through biological oxidation.

The soil has a strong ability to purify cyanide. Except for the cyanide entering the soil, which escapes into the air, part of it is absorbed by plants and is assimilated or oxidized in the plants. It remains in the soil and is partially converted to carbonates, ammonia, and formate by the action of microorganisms.

When cyanide continues to be contaminated, soil microorganisms can acclimate and produce suitable microflora after domestication, which plays a huge role in the purification of cyanide. Therefore, in some areas where low-concentration cyanide-containing industrial wastewater was subjected to long-term sewage irrigation, the cyanide content in the soil hardly accumulated.

Migration and transformation: Cyanide is widely present in nature. Animals and plants all contain some cyanide substances. Some plants such as bitter almonds, ginkgo, nuts, cassava, sorghum, etc. contain considerable amounts of cyanogenic glycosides. It releases hydrogen cyanide after hydrolysis, and trace cyanide can also be detected in some common grains and vegetables.

Cyanide is also commonly found in soil and decreases with increasing soil depth, and its content is 0.003-0.130 mg/kg. The cyanide in natural soil comes mainly from soil humus. Humus is a complex class of organic compounds whose core is polymerized from polyphenols and contains a certain amount of nitrogen compounds. Under the action of soil microorganisms, cyanide and phenol can be generated, so the background content of cyanide in the soil is closely related to the content of organic matter in it.

Due to hydrogen cyanide and its volatility, most cyanide is easily soluble in water, so the cyanide discharged into the natural environment is easily diluted, diffused by water (or the atmosphere), and has strong migration ability. Hydrogen cyanide and simple cyanide are very unstable in surface water, and hydrogen cyanide easily escapes into the air; or when the pH of the water is greater than 7 and the presence of oxygen, it can also be oxidized to form carbonates and ammonia.

Simple cyanide is easily hydrolyzed in water to form hydrogen cyanide. If the water contains inorganic acids, even carbon dioxide, which is produced by dissolving carbon dioxide in water, can accelerate this decomposition process.

Hydrogen cyanide has a bitter almond odor, which is easily diffused and easily soluble in water to form hydrocyanic acid. Cyanide is generally colorless crystals. It is prone to deliquescent in the air and has a weak odor of hydrogen cyanide. The water produces almond odor.

Hazardous characteristics: Non-combustible. High heat or contact with acids can produce highly toxic cyanide gas. Reacts violently with nitrate, nitrite, and chlorate, posing the risk of explosion. It can absorb water and carbon dioxide in the presence of acid or exposed air, and decompose into highly toxic hydrogen cyanide. The aqueous solution is an alkaline corrosive liquid.

Wear gas masks and gloves to handle spills, sweep up, and pour into a large amount of water. Add an excess of sodium hypochlorite or bleaching powder and leave it for 24 hours to confirm that all cyanide is decomposed.

After dilution, put it into the wastewater system. After the contaminated area is soaked with sodium hypochlorite solution or bleaching powder for 24 hours, it is rinsed with a large amount of water, and the washing water is put into a wastewater system for unified treatment.

For hydrogen cyanide, the gas should be sent to a fume hood or introduced into a sodium carbonate solution, and an equal amount of sodium hypochlorite should be added to neutralize it with a 6mol / L sodium hydroxide solution.

Respiratory protection: When it is possible to come into contact with the poison, you must wear a hood-type electric air supply filter dust-proof respirator. When exposed to dust, wear an isolated respirator.

Eye protection: Protection has been done in respiratory protection.

Others: Smoking, eating and drinking are not allowed on the job site. After work, wash thoroughly. The workshop should be equipped with first aid equipment and medicines. Store clothes contaminated by poisons separately and wash them for later use. Operators should learn to save themselves and each other.

Eye contact: Raise the eyelids immediately and rinse thoroughly with plenty of running water or saline for at least 15 minutes. Seek medical attention.

Inhalation: Quickly leave the scene to fresh air. Keep your airways open. If breathing is difficult, give oxygen. When breathing is stopped, immediately perform artificial respiration (do not use mouth to mouth) and chest compressions. Give inhaled isoamyl nitrite and seek medical attention.

Halogen Elements || Why Halogen are So Reactive || Elemental Nature