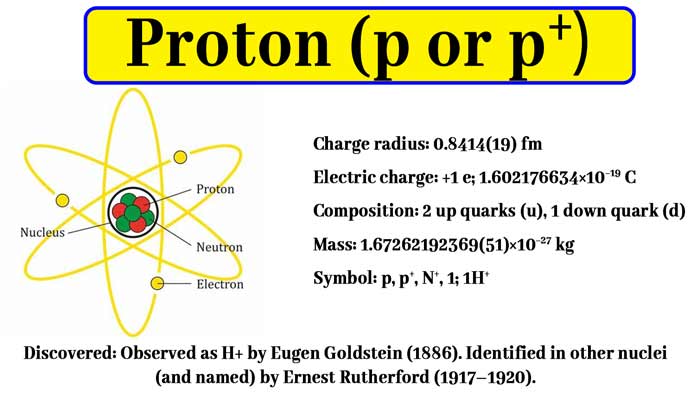 Goldstein discovered in 1886 that if a perforated cathode was used in the middle of the immersion tube and flowed into the gases at low pressure, a type of rays would be produced that would move from the anode to the cathode and the holes of the cathode.

It emits glow by colliding with the wall of the immersion tube. These rays are called anode rays, positive rays, canal rays or Goldstein rays.

How to learn atomic number of elements of periodic table

Positive rays rotate a small and light wheel placed in its path. This proves that these rays are made up of microscopic particles and they contain kinetic energy.

The ratio of the amount of charge (e) and their mass (m) on the positive particles of positive rays derived from them by taking different gases in the immersion tube has been determined. This value (e / m) varies for different gases.

This value does not depend on the nature of the substances in the electrodes of the immersion tube.

Radio activity is prominent among them. E Rutherford discovered that bombarding of alpha particles on nitrogen gas produces oxygen gases and protons are emitted.

The value (e / m) of the charge (e) and mass (m) of the positively charged particles of hydrogen gas were determined by J. J. Thomson.

Study of the properties of cathode and anode rays revealed that the flow of current at low pressure in gases leads to ionization of gases. Electrons and positively charged particles are formed as a result of ionization.

The mass of an electron is 91 grams and the mass of a proton is 16 grams. On this basis, the total mass of protons and electrons present in 1 atom of an element can be determined. 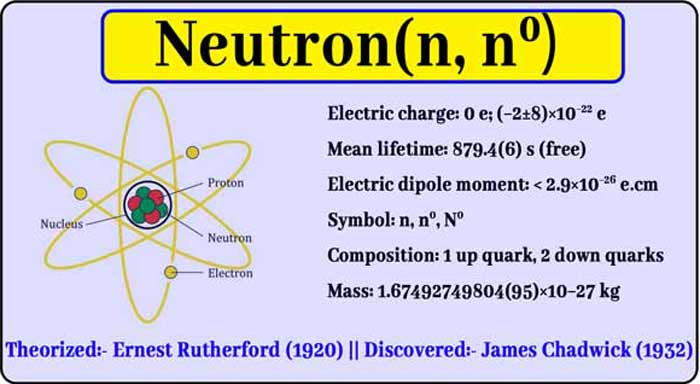 On this basis, E rutherford suggested that atoms of all elements, like electrons and protons, have a third type of particle whose weight is approximately equal to the weight of 1 atom of hydrogen and which are electrically neutral.

Rutherford’s suggestion was first confirmed in 1932 by the English scientist J Chadwick. Chadwick found that neutron emitted when alpha particles were bombarded on some light elements such as boron, beryllium, etc.

By studying many nuclear reactions, it is now known that neutron is present in the atoms of all elements, so that neutron is also a fundamental particle of substances like electron and proton. Neutron mass has also been determined by experiments.

Rutherford has proved by scattering alpha particles that almost the entire weight of an atom is in its nucleus, so neutron in an atom is in the atom’s nucleus.

It is assumed that a neutron consists of a proton and an electron. The following action occurs when bita rays are obtained by radioactive dissolution of atoms of elements.

Some other particles like Positron, Meson, Neutrino, antiproton, anti-neutrino etc. are also obtained when the atom is split. These particles are temporary. Hence their importance is very less in the atomic structure.

This is achieved by the dissolution of some temporary atoms. Positron is also obtained from bombardment of photons with energies greater than 1 MeV or on other photons or particles with electric charge.

The positron is a floating particle and is charged with electrons from other substances, the total mass of the positron and electron is converted into energy according to the equation E = mc2 of eistein. The positron was discovered by Anderson.

Two types of meson particles have been discovered. Their mass is between the mass of electron and proton.

Neutrino and Anti neutrino are electrically neutral and floating particles with a weight of about 0.
The relative directions of their spin and linear momentum are opposite to each other and on this basis, they are called neutrino and anti neutrino. Their existence was suggested by Pauli and confirmed by Rodebeck.