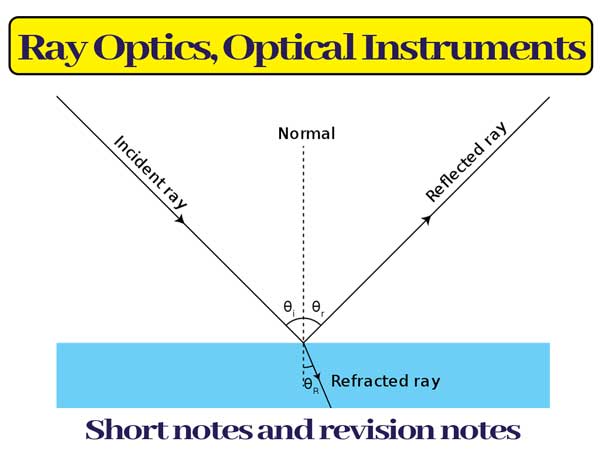 Ray Optics and Optical Instruments: It is the branch of physics that deals with the study of light and the phenomena associated with it. It is divided into two branches:

Geometrical optics or ray optics: It treats propagation of light in terms of rays and is valid only if the wavelength of light is much lesser than the size of obstacles. It deals with the formation of images by ordinary geometrical methods and the laws of reflection and refraction.

Physical optics or wave optics: It deals with the theories of the nature of light and provides an explanation for different phenomena like reflection and refraction on the basis of Huygens principle, interference, diffraction, and polarisation.

When a light ray strikes the surface separating two media, a part of it gets reflected i.e. returns back in the initial medium.

It is known as reflection. The angles which the incident ray and the reflected ray make with the normal to the surface are known as the angles of incidence and angle of reflection respectively.

Laws of reflection of light:

The two laws of reflection of light are as follows:

– The incident ray, the reflected ray and the normal to the surface, all lie in the same plane.

– The angle of incidence i is equal to the angle of reflection r. i.e. i = r

On reflection, the velocity, wavelength, and frequency of light do not change. But the amplitude or intensity of the reflected ray is less than that of the incident ray.

Reflection by a plane mirror: The focal length and radius of the curvature of the plane mirror are infinite.

Concave mirror: When the reflection takes place from the inner surface and the outer surface is polished, the mirror is known as a concave mirror. As shown in fig. (a).

Convex mirror: When the reflection takes place from the outer surface and the inner surface is polished, the mirror is known as a convex mirror. As shown in fig. (b).

– All distances have to be measured from the pole of the mirror.

– Heights measured upwards and normal to the principal axis of the mirror are taken as positive, while those measured downwards are taken as negative.

Refraction of light: When a ray of light passes from one medium to another, in which it has a different velocity, there occurs a change in the direction of propagation of light except when it strikes the surface of separation of two media normally. This bending of a ray of light is known as refraction.

The angles made by the incident ray and the refracted ray with the normal to the separating surface at the point of incidence are known as the angles of incidence and of refraction respectively.

The two laws of refraction are as follows:

– The incident ray, the normal and the refracted ray all lie in the same plane.

Some natural phenomena due to sunlight

Rainbow: Rainbow is a beautiful arc of seven colours seen in the sky after rainfall. The rainbow is an example of the dispersion of sunlight by the water drops in the atmosphere. This is a phenomenon due to combined effect of dispersion, refraction and reflection of sunlight by spherical water droplets of rain. To observe the rainbow, back of observer must be towards the sun.

Scattering of light: As sunlight travels through the earth’s atmosphere, it gets scattered (changes its direction) by the atmospheric particles. Light of shorter wavelengths is scattered much more than light of longer wavelengths. The amount of scattering is inversely proportional to the fourth power of the wavelength. This is known as Rayleigh scattering.

Illustrations of scattering of light

– The sun looks reddish at the time of sunrise and sunset

Why Carbon Cycle is Important || How it Works

What is the formula of Chlorobenzene? Preparation, Properties and uses