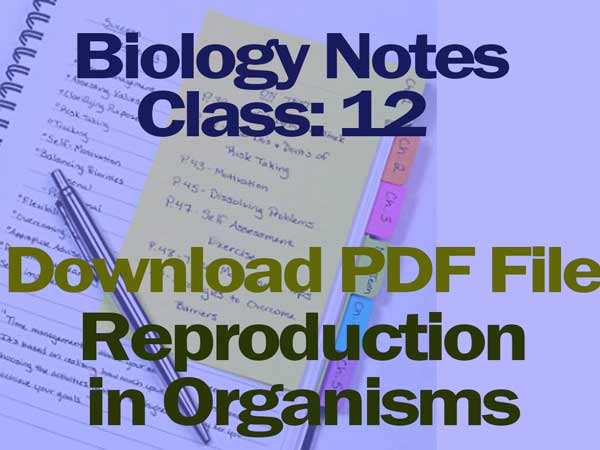 Reproduction in Organisms: Reproduction is the biological process in which an organism produces young ones (offspring) of its own kind.

All the organisms grow to a certain maturity in their life before they start reproducing sexually. The period of growth between their birth up to their reproductive maturity is called the juvenile phase.

In plants, the period of growth between seed germination up to initiation of flowering is called the vegetative phase.

The juvenile phase and reproductive phase are of variable durations in different organisms.

On the basis of breeding time, animals may be either seasonal breeders (reproduce in particular period of the year) or continuous breeders (continue to breed throughout their sexual maturity).

The females of placental mammals exhibit cyclical changes in the activities of ovaries and accessory ducts as well as hormones during the reproductive phase.

In non-primate mammals like cows, sheep, rats, deer, dogs, tigers, etc., such cyclical changes during reproduction are called oestrus cycle whereas in primates (monkeys, apes, and humans) it is called the menstrual cycle.

These events of sexual reproduction take place before the fusion of gametes. These include gametogenesis and gamete transfer.

It is the process of the formation of gametes. The reproductive units in sexual reproduction are specialized cells called gametes which are of two kinds: male and female.

In some lower plants (e.g., in some algae), the two gametes are morphologically similar, such gametes are called isogametes (or homogametic).

In some lower animals, both male and female sex organs are present in the same individual.

These animals are called hermaphrodite or monoecious or bisexual, e.g., tapeworm, earthworm, and leech. Most of the animals are unisexual or dioecious with distinct male and female individuals e.g., Ascaris, cockroach, frog, lizards, birds, mammals.

It is the complete and permanent fusion of two gametes from different parents or from the same parent to form a diploid zygote (syngamy).

Syngamy is of two types with regard to the source of fusing gametes:

(i) Endogamy (Self-fertilisation): It involves the fusion of male and female gametes of the same parent. _us it is uniparental, e.g., Taenia (tapeworm).

(ii) Exogamy (Cross-fertilisation): It involves the fusion of two gametes produced by different parents. Thus it is biparental, e.g., Rabbit.

The external medium such as water is required for this type of fertilization e.g., fish and frog.

When the egg is retained inside the female body where it fuses with the male gamete, the process is called internal fertilization or internal syngamy e.g., reptiles, birds, mammals, etc.

Formation of the zygote: After fertilization, a diploid zygote is formed in almost all sexually reproducing organisms. Further development of the zygote depends on the type of life cycle of the organism and environmental conditions.

Embryogenesis: Embryo develops from zygote by a process called embryogenesis.

Cell division increases the number of cells in the developing embryo while cell differentiation helps to form specialized tissues and organs to form an organism.

On the basis of the development of the zygote, animals are grouped into oviparous, viviparous and ovoviviparous.

In ovoviviparous animals, the female retains the eggs inside its body after fertilization and allows the development of the embryo inside the body without providing extra nourishment to the developing embryo as the placenta is absent. However, the female individual gives birth to the young ones e.g., sharks and rattlesnakes.

In flowering plants, the zygote is formed inside the ovule of the female sex organs.

The fertilized ovule matures and gets converted into seeds. The wall of the ovary produces the pericarp (fruit wall).

After dispersal, the seeds germinate to form new plants.

How to compose Cement? Cement Uses.